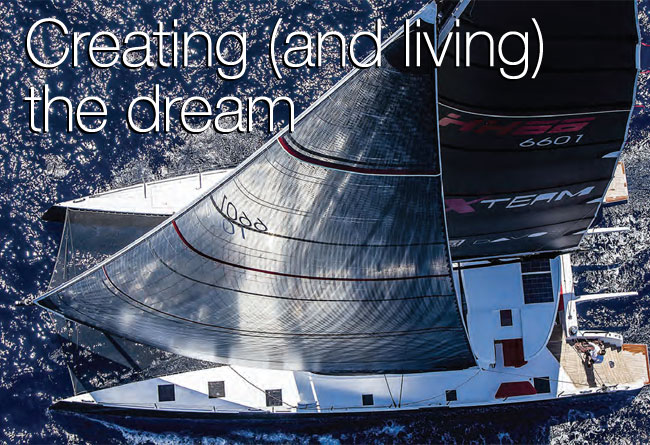 Hudson Hakes HH66
Large performance multihulls offer the best of all worlds – sailing excitement, comfort and style, both racing and cruising – and are entering their next generation with the recent launching of the HH66 catamaran, built by Hudson Yacht & Marine. This is the latest in a long series of designs from Californiabased Morrelli & Melvin, who have been leaders in not only finding the right balance but also optimising the competing elements of speed, style and reliability into bold new innovative designs. Couple this design refinement with one of the world’s largest integrated production builders in advanced composites and the results are spectacular.

Hudson’s history in building large performance cats goes back several years, with eight 60ft fast luxury multihulls already under their belt. Builder Paul Hakes’s own relationship with Gino Morrelli goes back further with the development of small, fast cats like the SL33, introduced in 2008 for the European lake sailing market. This fast 650kg, 10m design also caught the attention of America’s Cup contenders of the day who were new to the multihull genre, both Luna Rossa and Team New Zealand getting their own boats to play with as they learned more about multihull sailing and design.

Yet Hakes and Morrelli actually go back further still, to Hakes’s days at Cookson Boats during the building of Steve Fossett’s Jules Verne-contender PlayStation, a 100ft monster from the late 1990s designed by Morrelli & Melvin. It was here that Hakes got a taste for the uniquely high static and dynamic loading inherent to big cats and the structures needed to accommodate these loads in an offshore performance context.

In design evolution Hakes says the HH66 differs slightly from its 60ft predecessors – they’re not only larger for size sake, but based on feedback from the 60ft owners. ‘They found that the 60ft design was large enough to accommodate the owners and their guests, but not to comfortably accommodate the minimum two full-time crew needed to manage a boat of this size and complexity,’ said Hakes

‘Many thought that one or at most two crew would be sufficient for boat handling and the maintenance and operation of simple onboard systems, but as these boats became more complex it became apparent that two pros were needed to allow the owner and guests a measure of comfort when making journeys of any significant length.’

Another important element in the new design is the evolution from centreboards to daggerboards. At 6m long and fabricated using 300kg of carbon, the latest boards are curved slightly inboard for efficiency. And this configuration is efficient, giving a 20% boost in lift/drag efficiency and generating up to 3 tons of lift. Fully deployed these boards yield a 4m draft; but when cruising in shallower waters the boat still performs well with them partly raised.

The T-shaped rudders of the HH66 contribute as well, generating 800kg of lift to help dampen pitching, in turn increasing comfort and speed. In total the foils generate nearly 4 tons of lift when the boat is at speed.

With all this load, the boards inevitably have to be robust: the designed static load limit is 8.5 tons and the dynamic load limit much greater. To ensure reliability, HYM fully test each board before installation. The daggerboard is also engineered to take 0.5m deflection at 17 tons of load, with a breaking strength of twice this amount. But it’s important that the engineered maximum load is not too high: if the boat grounds at high speed the foil needs to break and not the boat.

This kind of tailored engineering is possible due to the scale of HYM’s operation; there is complete digital control on the design, tooling and fabrication of parts both large and small. This vertical integration in the design process allowed Morrelli to nearly achieve his ideal design scenario, leaving the hull shapes to be the last element in the design process – because all the other constituent pieces of the boat, their weight and their position help drive the choice of hull shapes needed to maximise performance.

Having said this, the HH66 hull design is a bit more generous than seen on other similar cats, in part because Morrelli and Hakes agree that when owner specification and cruising gear inevitably tip the scales beyond the original design weight, the effects on hull trim are less pronounced with a less deleterious effect on performance.

There are other practical elements that make the HH66 distinguishable from the previous generation of this genre: for example, rather than install complex and enormously expensive co-generation electrical systems that limit fossil-fuel dependence but historically lead to myriad problems, the HH66 is powered by two old-school but highly efficient 80hp Yanmar marine diesels. Being easily driven, this big cat does not consume much fuel anyway; a calculation made for a client interested in trans-Atlantic crossings found that if the wind stopped completely and it became necessary to proceed under power, at a modest 6kt the boat would have a range of about 1,500 miles… not bad.

If a client does insist on having a carbon-free platform to cruise the world, HYM can accommodate it, having invested on the previousgeneration boats in the development of retractable skegs, lithium battery banks, dualpropulsion/ generation prop systems, solar panels, 280V electric engines and the energymanagement systems to control them all. Not such an easy fix on a remote Pacific isle, though…

Armed with a team of 25 in-house engineers and designers at HYM, Hakes is able to efficiently translate design concepts into reality across an entire project, since these boats are built from strong, stable carbon tooling to optimise longterm cost and production efficiency. This is particularly important, given that HYM now has no fewer than six of these 66-footers in production.

Below: Rather than follow the previous trend on these large modern cats with the steering position buried inside the interior, the helmsman of the new HH66 is more involved in the sailing of the boat while still enjoying generous protection from the elements 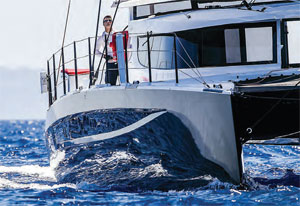 Yet, as Paul points out, ‘production’ is a relative term for these boats, when each of the owners and their project managers have specific requirements in their choices of deck and interior layouts, onboard equipment and the systems needed to support the functionality of each choice.

‘Our in-house engineering and design staff work with our clients to lay out the options,’ says Hakes, ‘This makes the process easy and efficient. We integrate the design and engineering of the tooling and components, then put parameters on the options, so performance is not unreasonably sacrificed and the overall design concept is not compromised. This is important when we go through a fabrication process of several months, while we try to stay within reasonable timelines and deliver the quality the customer expects as well as the reliability to ensure problem-free sailing over the long term.’

An example of how HYM can customise a production boat is in steering station choices. The last generation of luxury performance cats had steering stations located forward in the boat, either fully or partially enclosed within the cabin structure. While certainly secure from the weather, this also limited the helmsman’s ability to have any visceral feel for the boat, an element in sailing that every sailor needs. With the high speeds possible for these big fast cats, Hakes and Morrelli also felt that it would be safer to have weight trimmed further aft in the boat.

To address this and the practical matter of how to dock a boat that is nearly as wide as it is long, HYM’s engineers came up with a clever solution in the helm station, where not only are there seats available to accommodate the helm on each hull, but the steering pedestals themselves rotate to allow greater visibility in close manoeuvres.

‘This was a complex feature that we were only able to achieve with the help of efficient fabrication based on our digital design tools,’ says Hakes. ‘It would not have been practical without this facility.’

The helm detail is just one of many factors that elevate the HH66 and set her apart from her predecessors and other market offerings. State-of-the-art technical details, cutting-edge design, bestpractice construction and attention to detail combine, setting a new standard in the realm of luxury performance cruising multihulls.

HYM and Morrelli & Melvin have achieved a bold, yet refined, dualpurpose yacht that will undoubtedly propel the brand into the future. The first HH66 is already turning heads in Valencia and is sure to stun when she makes her official debut in Cannes this autumn.