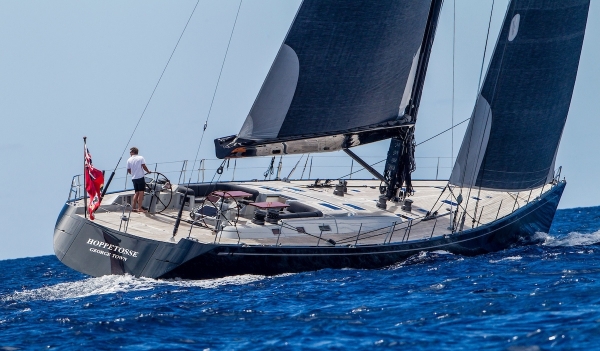 Hoppetosse is a superyacht and masterpiece built by Nautor’s Swan and launched in 2006. She combines the performance of a racing yacht with world-class comfort and opulence. The Swan 100 FD's deck lines give the yacht a very impressive sleek and racing oriented look. The cockpit concept features two spacious

L-shaped sofas with large cockpit tables on either side of the centre-line companionway. In addition the helmsman seats are extended aft to form another seating area on the aft deck. The coaming continues aft of the L-shaped helmsman seats awarding a sleek and elegant profile.

Hoppetosse has been maintained to an exceptionally high level and has benefitted from an open-checkbook budget where systems and equipment have constantly been upgraded and improved to keep this superyacht looking and working better then new.

- Complete rebuiliding of main propulsion engine and replacement of gearbox (2016)

- Complete strip and service of mast including new standing rigging and repainting of mast and boom in black, addition of new custom radar antenna mounting offering a clean and minimalist look (2016)

This magnificent yacht is ready for her new owner to step aboard for an extended voyage.  Available for inspection in Palma de Mallorca


Palma de Mallorca, Spain
Map location might not be exact