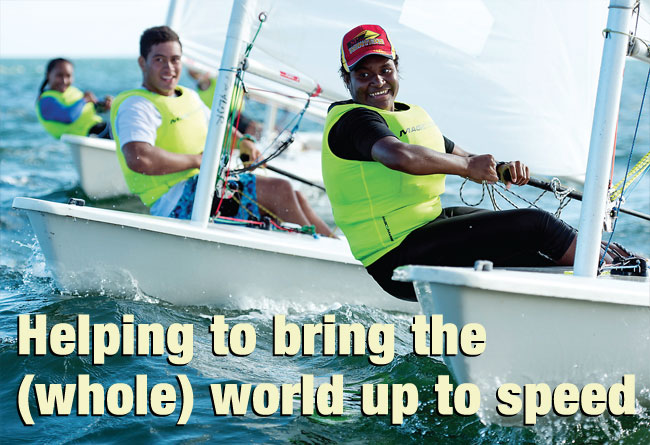 Reaping the rewards on a worldwide scale NAZLI IMRE

Six years ago the International Sailing Federation decided to set up a dedicated Training and Development department tasked with the challenge of helping its Member National Authorities (MNAs) to increase participation in sailing. Now, with a second administrator being appointed as I write this article, the scope and work of the department have grown beyond anything that I, as vice-president responsible for development, would ever have imagined when we embarked on this journey.

The role of ISAF is now and always has been to act as a facilitator, with each national sailing federation member of ISAF (currently numbered at 142) responsible for the delivery of the outcomes in their specific country. Training is the key that will unlock the future sustainability of any sport and sailing is no different, especially in a world where there is more competition than ever for commitment of our ‘free’ time. Our dedicated training programmes are addressing the fundamental resources and opportunities needed by our members, as well as helping nations not yet members of ISAF that we must attract to be able to bring more people to sailing and grow stronger, more sustainable foundations for the future of our sport.

Information on the programmes and initiatives that we are delivering can be found via our dedicated website page sailing.org/training as well as by joining over 100,000 people keeping up to date with our initiatives at: facebook.com/ISAFDevelopment and Twitter… @ISAFDevelopment

A majority of the international work is carried out by a small team of ISAF Nominated Experts, a term that in this context refers to around 16 individuals, who have a unique skill-set in either a specific practical discipline such as dinghy sailing or have experience in coaching sailors and/or coaches within the context of a developed national coaching framework. This team is currently responsible for the training of over 200 coaches per year, with a small number of the experts having been appointed in the capacity of Regional Development Co-ordinator. This means that they have an additional responsibility to work with groups of national sailing federations in defined geographical regions.

This work is having a huge impact on the ways in which ISAF members can communicate with the international federation and is set to grow in coming years.

This year also sees us deliver the first ever Youth Worlds Emerging Nations Program (ENP). Aimed at reducing the performance gap that exists between nations attending the annual ISAF Youth Sailing World Championship and helping to increase the number of nations attending who may not normally be able to send sailors to this event due to limited national resources, this annual programme (involvement in which is heavily subsidised by ISAF) follows the successful model of the Perth 2011 ISAF Sailing World Championships’ Emerging Nations’ Programme (ENP).

This model was delivered first at the ISAF Worlds in Perth, Australia and then again in the build-up to the 2014 ISAF Worlds in Santander, Spain. A total of five regional ENP performance clinics will be delivered this year in Oceania (Fiji), Europe (Hungary), Africa (Mozambique), the Americas (Antigua) and Asia (Malaysia), with attending nations able to apply for further support for sailors to help them attend the ISAF Youth Worlds in Langkawi, Malaysia in December 2015.

With longterm strategy being crucial to the development of international-level sailors, we are also busy working with the Aarhus 2018 ISAF Worlds hosts in developing the outline for another Emerging Nations’ Programme. This will act as a link for many of the young sailors currently taking part in the ISAF Youth Worlds ENP who will be too old for the Youth Worlds in 2017 — but who will then be ready to represent their nations at the Worlds in 2018, a Tokyo 2020 Olympic Games qualification event.

Our training and development work never ends. Our focus simply changes from nation to nation, from supporting the creation of sustainable national programmes to helping more developed members with the latest examples of current best practice for the effective delivery of their own work.

Through this process more and more potential sailors can enjoy getting afloat all over the world while all of those sailors wishing to compete can more quickly learn how to reach the pinnacle of the sport.
Nazli Imre, ISAF Vice-president for Training and Development