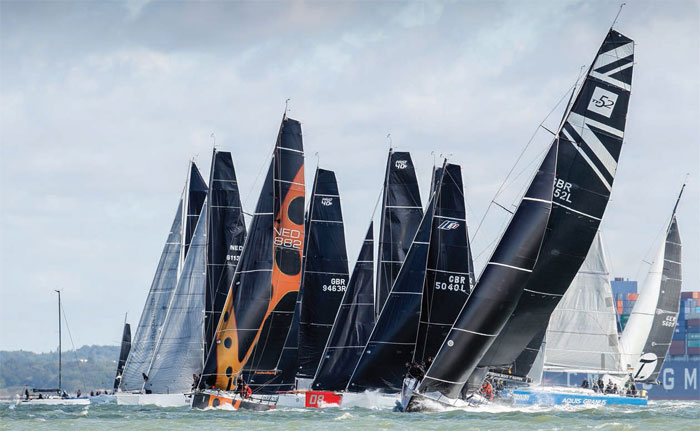 The granddaddy of them all and the model upon which so many great international regattas have been based... Cowes Week is approaching a rather significant birthday

It’s one of the most modern regattas in the world. Yes, that’s right, we are talking about Cowes Week which will celebrate its 200th anniversary in 2026. It is of course known around the world as one of the most challenging regattas in sailing, partly because of the fabulous racing conditions in the Solent and partly because of the relentless nightlife. That Solent tide, which gained a reputation for itself in the days when everyone wanted sanitised Admiral’s Cup racecourses, is now back in favour, as just another challenge on a demanding racecourse.

Cowes Week has retained its global stature by evolving and it continues to balance the inherent ethos of the event – which is regatta racing around the Solent on orienteering courses – along with multi-race days for some of the small one-design classes where the owners want the majority of their racing to be on windward/leeward courses. The J/70 class, as an example, has a 12- race schedule over the first four days starting and finishing at the famous Royal Yacht Squadron line, with a committee boat delivering a middle windward/leeward race each day.

For most classes, however, owners still want the programme built around a single race each day because, as the event organisers are always proclaiming, it is a regatta not a world championship. That said, the event’s ethos is world-class regatta racing and Cowes Week now has the most sophisticated course setting software in the world, an investment made over the years to avoid the “little hiccups” that might have featured in the past. At one time or another different fleets have been sent around the same mark in opposite directions and once upon a time a TP52 came to finish under spinnaker doing about 20kts only to find 100 X One Designs trying to go the other way off what was their start line! The consolidation and investment process started in the mid-1960s when, on the suggestion of His Royal Highness the Duke of Edinburgh, Cowes Combined Clubs (CCC) was formed, with nine different yacht clubs working together to bring coordination to the Regatta.

Main picture: one of the most challenging places to race with complex tides, intensely tactical courses and world class competition, there’s nothing else in the world quite like Cowes Week. Strong Class Zero and Class 1 fleets are one of the highlights in this week-long regatta

CCC is still the organising body but the yacht clubs provide 300 volunteers over the course of the week to make the racing possible, a stark illustration of the fact that despite the increasing professionalism in our sport the bedrock of it is still weekend warriors enjoying their racing, predominantly put on by volunteers. Cowes Week still runs multiple classes, 17 to 19 one-design dayboat classes every year, as well as the same again in IRC, Performance Cruiser and the recently launched Club Cruiser division. Winning your class at Cowes Week, no matter which it is, remains both challenging and rewarding, and while the Club Cruiser division is of course less competitive than IRC Class 1, it brings new people into racing, some of whom will go on to make their way into other higher performance boats.

A regatta as big as Cowes Week (circa 600 boats and 5000 sailors) is a year-round enterprise however and regatta director Laurence Mead leads a small executive team fully focused on delivering on the event’s objectives. Cowes Week remains a week-long regatta – racing on the final Saturday was dropped a few years ago so it is now seven days of racing. Whilst many regattas have shortened down to a four-day format Cowes Week is built around the old English tradition of a village carnival week, and competitors consistently reply to event surveys confirming their preference for the week-long event. That raises other challenges and in 2022 the organisers will be launching a Cowes Week Race Camp accommodation option, which will be cost-effective Glamping (glamorous camping for those unaware of the lingo!) The camp site, about 1.5 miles from the Medina River will be serviced with a shuttle bus 18 hours a day and will help offset the challenge of finding somewhere in the small town of Cowes to stay. Although entry fees remain tightly controlled by the event organisers some of the other costs of participating do fluctuate and the event organisers are working with other local stakeholders to manage that situation more proactively.

One of the other main objectives is to maintain international participation. For racers of a certain age the Admiral’s Cup was of course the ultimate international big boat event, one that drew people to Cowes Week every two years. Unfortunately, the Admiral’s Cup fell victim to a range of different pressures but in 2019 there were still sailors from over 100 yacht clubs, from 19 different countries competing at Cowes Week. The Solent Team Trophy, introduced a few years ago, is competed for by yacht clubs rather than nations, with the Royal London Yacht Cub winning the 2021 trophy ahead of a very strong Royal Yacht Squadron team. The regatta team would like to make this a more international trophy in the future and have expressed their willingness to assist with charter boats for overseas teams who want to compete.

In addition to the hugely more powerful course-setting technology that is now in place, Cowes Week runs one of the most advanced competitor communication systems in the sport. The Cowes Week App is fully integrated with the coursesetting software enabling the race team to send messages to individual boats, to specific fleets or to groups of boats. The good old days of trying to read the course board at the fiveminute gun are long gone. Once the race committee sets the course it is all integrated to arrive on the app, which can be downloaded by all of the crew not just the tactical brains at the back. The foredeck crew no longer need to be shouting backwards asking where the first mark is. Although the race organisation still provides a printed graphic race chart, the Cowes Week App provides the distance and bearing to each of the marks in turn, significantly reducing the drama factor for boats visiting the regatta for the first time. 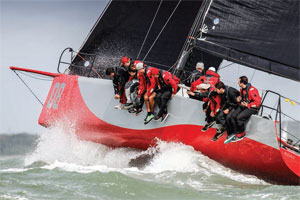 Above and below: Cowes Week has uniquely broad appeal with entrants ranging from racing yachts like Redshift to Bembridge Redwing one designs which have raced here for more than 100 years. The event draws about 600 boats in more than 30 classes and 5,000 sailors from about 20 countries 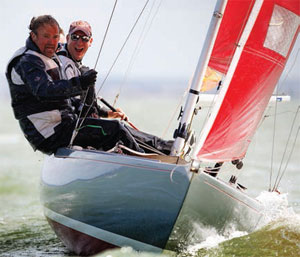 Cowes Week also produces some of the most comprehensive TV coverage of sailing in the world. Three hours of live commentary covering most of the starts goes out seven days a week, a great resource for the event’s sponsors. In 2022 Cowes Week will launch its 5G project with the aim of having live 360° coverage coming back from 50 boats out on the racecourse.

For all of the technology, Cowes Week is however still a challenging regatta. Starts off the Royal Yacht Squadron are legendary, beating up the Island shore against the tide remains a unique aspect of the regatta, one that continues to excite sailors every year. ‘We had a skipper come in and tell us how much he was looking forward to the week’s sailing a couple of years ago and on day one I looked at the racecourse only to see that skipper hard aground having pushed it a little too much off the Squadron start line. My heart sank for him. However, when he got ashore he made a point of seeking me out and telling me how much he loved the race and how being hard aground just off the Royal Yacht Squadron was all part of the fun,’ says race director Laurence Mead.

The race committee does however recognise the different types of racing that sailors enjoy and there has been a noticeable effort to deliver on all of those different expectations across the fleets. If you race at Cowes Week today you can expect the regatta director to be completely openminded when listening to the class associations’ input. Whilst we have all long preferred going downwind to upwind, specific window angles for different boat designs are now more particular than ever before.

A Cape 31 (which had its own class in CW 2021) with a huge asymmetric spinnaker needs broader downwind legs as the breeze builds, whereas some of the bigger IRC boats have gone down a road of developing very specialist close reaching sails and want the opportunity to fly them during the week. The 2021 regatta featured a long reach back from Lymington for the Class Zero and Class 1 boats when they got the opportunity to run with triple head jib setups.

Whilst it’s not easy to get every leg right, setting them in the morning and being at the mercy of the windshifts thereafter, the course setters are now working to a much higher level of sophistication than ever before. For those sailors who haven’t done Cowes Week for a few years, the improved communications from the race team, as well as their adaptability to changing conditions will be a revelation.

Cowes Week 2022 starts on Saturday, July 30 with race day one and the opening party that evening, the final prize-giving is Friday, August 5.