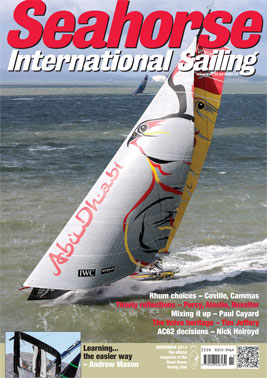 A most remarkable man – Part 2
With the first edition of Bart’s Bash BLUE ROBINSON, IAIN PERCY, BEN AINSLIE and ANTHONY NOSSITER reflect on the big man himself

Have your say!
The Sailing Yacht Research Foundation needs your help… as DOBBS DAVIS explains

It all started in a garage – Part 2
And the J/Boats team take a first tentative step into the grand prix world. ROD JOHNSTONE

Update
Some you win some you lose… with TERRY HUTCHINSON, DOBBS DAVIS celebrates the 50th anniversary of the Big Boat Series, NICK HOLROYD of Emirates TNZ takes a first look at AC62 design and we catch up with ‘new’ Italian skipper on the block… ROBERTO TOMASINI

World news
It’s all change at the Tour Voile as the event goes multihull (much to the approval of FRANÇOIS GABART), a look at the extraordinary ‘Ultime’ line-up in the 2014 Route du Rhum, a stirring tale of courage and calm from the Tasman, an epic 31st Hamilton Island Race Week and something a little better than PHRF. BLUE ROBINSON, IVOR WILKINS, PATRICE CARPENTIER, DOBBS DAVIS

Paul Cayard
And how the sport – and the Rolex Big Boat Series – is steadily changing for the better...