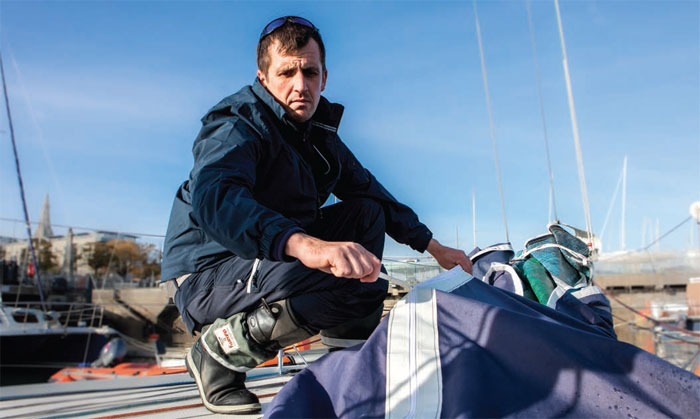 When a piece of clothing becomes as much a statement as a practical solution for outdoor life, as a company you’ve hit the bullseye. Footwear specialist Dubarry is 85 this year and they’ve hit the target on many occasions. But as their marketing director Michael Walsh explains, one product in particular stands out for its continued success, and has helped provide a template for the next chapter for this famous Irish company with the launch of the Dubarry Aquatech collection.

‘The Crosshaven Sailing Boot is our flagship sailing product,’ says Walsh. ‘It has been and continues to be extremely popular with a wide range of sailors who know precisely what they want and what it delivers. And while this is a fantastic situation to be in, the development of the Crosshaven Boot has also helped us significantly in the design and development of other specialist outdoor clothing.’

Dubarry’s roots have been firmly in the footwear trade right from the start of its long and proud history but the Crosshaven Boot arrived comparatively recently, a result of a conversation during the 2008-09 Volvo Ocean Race. Its predecessors, the Shamrock and Ultima Sailing Boots, have long been sailors’ favourites and can be seen at regattas all around the globe.

Main picture: following in the wake of its highly successful boots (worn by many pro ocean racers) Dubarry has now launched the Aquatech range: shirts, jackets, hats, trousers and more.
Below: the iconic Crosshaven boot was inspired by discussions with four of the bestknown Volvo Ocean Race sailors 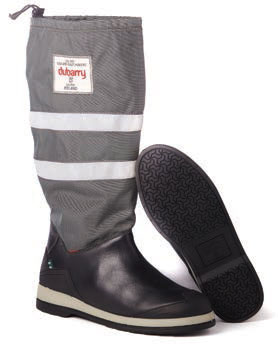 ‘We’d brought our design team to the stopover in Galway to talk to crew members Damian Foxall, Ian Walker, Justin Slattery and Neal MacDonald. We spent some time shooting the breeze in general, discussing the pluses and minuses of the different types of footwear that they had worn. And one of the key topics that came up was the requirement for a gaiter, as an integral part of the boot. Neal McDonald had taken a pair of our boots and had a sailmaker add a gaiter. That intrigued our designers and they started work on a purposemade gaiter that could deal with an upsurge of water but that would also have sufficient release channels for the water to flow out when it came back down again. And from there the Crosshaven Boot was born.’

Walsh believes that listening to the experience and views of those operating out in the field is essential, no matter how well you may know the sport or the circumstances. He also believes that this is one of Dubarry’s key strengths and points to several examples outside the sailing world where listening carefully to the precise feedback provided crucial clues to creating a popular and effective product.

‘The equestrian lifestyle world is a big one for us where the clear message has been about the amount of time that our customers wear their boots and the variety of tasks that they perform,’ he says. ‘Often it’s all about refining subtle elements of existing and successful footwear that is key.’

Which leads to the company’s latest launch, the Dubarry Aquatech Collection, as this was born from a similar scenario. ‘The first thing I’ll say is that we have no desire to enter the foul weather gear market, Walsh says. ‘Instead, the Aquatech project started when we noticed that in the superyacht and crew uniform market, the fit, finish and quality in a garment with a neutral colour and style onto which uniform style branding could be added, was very limited. We also saw how crews were wearing their uniforms across a wide range of activities from sailing to day-to-day use. As it happens this also reflects how many of us wear our sailing clothing. We often wear, say, a particular jacket because it does the job well across a range of activities and fits in with our lives rather than being a specific garment for a specific sailing purpose.

‘The men’s Croatia and the women’s Livorno fleece-lined crew jackets are the result of that work. To accompany the crew jackets, Dubarry has also launched the Dubrovnik sailing trousers and Imperia technical sailing shorts.

‘As you would expect the jackets are all breathable, wind resistant, waterproof with fully taped seams and even have an eyewear cleaning cloth – features which make them highly practical afloat. But they are also the kind of jacket you would wear ashore too, not just because they look good but because they do the job well.’

For a company that started life in the footwear trade more than eight decades ago, listening to markets and moving with technology has led them to a place where they were only too happy to place at least one of their boots on the other foot.