When time is money 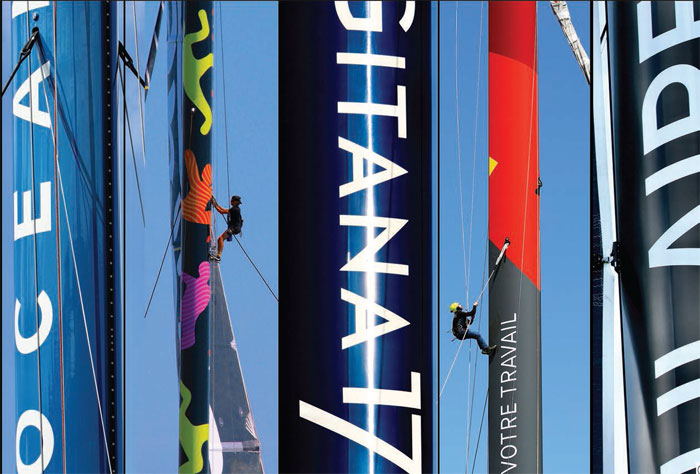 Hexcel’s new range of G-Vent pre-pregs solves many of the biggest challenges for composite yacht and component manufacturers... including allowing a much-accelerated production process

Hexcel is one of the world’s leading carbon fibre suppliers with a multi- billion-dollar annual turnover. Their largest research and technology centre for resin systems and adhesives is at Duxford in Cambridgeshire, UK, with strong links to a number of the UK’s leading universities. The fibre they supply is used extensively within the latest generation America’s Cup and Imoca fleets as well as within the aviation, defence, energy and automotive industries, and naturally when a company with such a reputation says it has developed a game-changing technology, we listen carefully.

Hexcel announced the launch of G-Vent pre-preg in March this year, and instantly solved many of the biggest complicating factors of pre-preg manufacture. An unlimited number of layers of pre-preg can now be laid on top of one another without debulking, and then do not need to be cured in an autoclave. This drastically reduces the build time for thick section carbon fibre components such as foils and opens up the construction of cutting-edge composite parts to the vast majority of boatbuilders without access to a large autoclave. G-Vent also enables the building of huge ultra-high- quality carbon fibre structures that would not be commercially feasible to produce in an autoclave.

Main picture: a selection of the Ultim masts, which are all built by Lorima from Hexcel materials. Carbon fibre masts will be much easier, cheaper and quicker to produce with Hexcel’s new G-Vent technology, which eliminates the need for autoclaves and debulking

G-Vent itself is a microscopically thin layer of material integrated within the pre-preg carbon fibre that acts as a network of pathways to let the material “vent”. As the resin cures, any air trapped inside automatically leaves the composite component via these pathways, leaving a compacted composite component without the use of a high-pressure autoclave or debulking steps. The G-Vent layer weighs between two and six grams per square metre of pre-preg, but it is so efficient at removing air from composite material that the finished product has mechanical properties matching the cutting-edge results produced using traditional carbon fibre pre-pregs with debulking and an autoclave.

Stefano Beltrando is widely recognised as an industry leader in the quality control of composite parts. He is the founder and CEO of QI Composites, leaders in non- destructive-testing (NDT) within the marine industry, and currently quality control manager for the Luna Rossa America’s Cup team. QI Composites carried out independent testing of thick composite components produced using G-Vent, and the results were conclusive.

‘We evaluated the quality of thick laminates produced with G-Vent and found that they are comparable with laminates made in an autoclave as per best practice in the market. Even more impressive, they were achieved with no debulking. We noticed that the void content, compaction and uniformity of samples made with G-vent are comparable with laminates of the same thickness made in an autoclave.’

If the quality of composites produced is impressive for someone working in America’s Cup quality control, then they should be good enough for anyone. 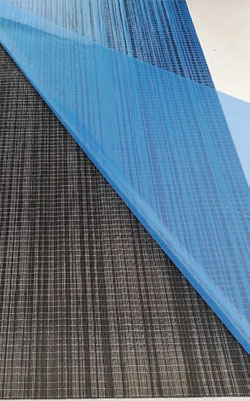 Above: G-Vent is a microscopic- ally thin layer that acts as a network of pathways in the pre-preg material to let it “vent”
Below: G-Vent was developed primarily for commercial shipping wing sails, but racing sailors will see great benefits.
Bottom: G-Vent is equally suitable for thick section parts 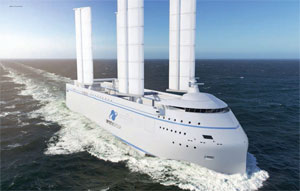 The construction of composite parts by wet lay-up, where a resin is rolled onto some fibre in the same way you might paint a wall, is simple enough to be done in the garden shed but will lead to high void content and also a low fibre volume fraction (meaning there is less structurally important fibre and more resin per unit of composite produced).

Building composite parts via infusion requires a vacuum pump to suck resin through the fibre and a little more expertise, but is common practice in small boatyards around the world and requires relatively low capital investment. Infusion typically leads to lower void content and higher fibre volume fractions than wet lay-up.

When cutting edge performance is needed, pre-preg fibres are used, delivering remarkably low void content and high fibre volume fractions due to the uniform distribution of resin throughout the fibre. As a result components built with pre-preg can be lighter and stiffer and more reliable than those built by any other method.

Unfortunately, when it comes to practicality and ease of manufacture pre-preg starts to get more complicated. First of all the fibre is pre-impregnated with a precise amount of resin in the factory, but it must then be kept refrigerated until it is used, to stop it curing. Secondly, debulking (a process in which air is sucked out of the composite part via a vacuum) is typically needed after every two layers of fibre are laid. Thirdly, composite laminates which are more than a few millimetres in thickness are best cured in an autoclave at high temperature and high pressure.

The debulking process is laborious, leading to both extra cost and very long lead times for thick composite parts that may be hundreds of layers thick. Autoclaves large enough to fit boats or superyacht masts inside are extremely expensive bits of kit that even some of the performance sailing industry’s biggest players struggle to justify financially. The closest available autoclave might be a very long way from where you want your large composite object to end up, leading to substantial delivery costs. As a result, constructing a boat in pre-preg can be prohibitively expensive for most of us and even in the America’s Cup world when budgets may be less constrained, the lead time needed to produce a new foil design has a direct impact on the entire development programme. G-Vent pre-preg technology can be used to produce complete components or combined with standard pre-pregs and used in thicker parts of a component, and it appears to resolve many of these constraints, providing an optimised processing solution for the highest quality thick section composite parts.

Tom James, marine business development manager at Hexcel, highlights that Wind Assisted Ship Propulsion (WASP) systems are predicted by many to have a huge impact on the shipping industry, and significant research and development funding is available from within the industry and at government level. Many WASP systems, including some being developed by naval architects with America’s Cup wing-sail design experience, use a composite wing- sail which is automatically and autonomously trimmed to provide the amount of power required at any given moment. G-Vent technology has been designed to deliver for this potentially lucrative market, in which the sheer size and potential number of wing-sails needed mean that out- of-autoclave production will very likely become an absolute necessity.

We will all benefit in some way if the shipping industries’ impact on global warming can be limited and we wish them success in this endeavour. If high-quality carbon fibre components become quicker and cheaper to build then it is a relatively unimportant side product of such development, but one which many Seahorse readers will very much be looking forward to!