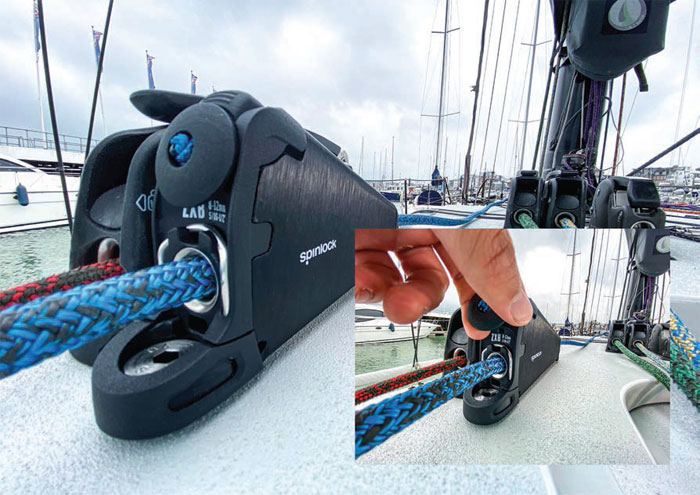 ... but don’t break it. Managing huge line loads with minimal line wear is a complex science that Spinlock have made their own

Getting a good grasp on things has been at the heart of Spinlock’s business for over 30 years and many of their innovative products have helped change our sport. First came the rotating cam, then the sliding jaws, two fundamental steps in the design evolution of rope clutches that we take for granted today.

Yet, while it’s easy to see the basic differences between a handle that rotates and one that slides, appreciating the latest technical advances within modern rope holding isn’t so easy. But, the reality is that there have been some big steps forward. Spinlock’s XTX Powerclutch is a good example with its ingenious new clutch that incorporates a braided soft grip sleeve rather than jaws or a cam.

Achieving its grip by allowing a sleeve to clamp down onto the rope as the load comes on is not only highly effective, but means that the cleating action is much kinder on the rope. The soft grip clutch also lends itself well to remote operation thanks in part to its toggle operation. This was one of the key features that was carried over into Spinlock’s latest Powerjammer, the ZXB. But the ZXB jammer is much more than just a new model that continues their latest thinking. Unless you are an expert on rope holding, from the outside the ZXB simply looks like a sleeker, lower profile version of the well-established and popular ZS model. And while both facts are true, it does little justice to a step change in jammer design that is set to trigger a new generation of models for the Cowes-based company.

‘The starting point for this jammer was an unusual one as we applied an aerospace manufacturing technique to join the alloy components that make the body of the jammer,’ explains Spinlock’s CEO Chris Hill. ‘The result is that we have created a monocoque construction that has no fixings or fasteners and despite being smaller and 40 per cent lighter than the ZS jammer, it is significantly stronger with a maximum safe working load of 3,000kg.

Main picture: Spinlock’s latest Powerjammer, the ZXB, is lighter and smaller but also significantly stronger than the previous model with a maximum SWL of 3,000kg
Above: the XTX Powerclutch has a braided soft grip sleeve instead of jaws or a cam, so it’s much kinder on the rope 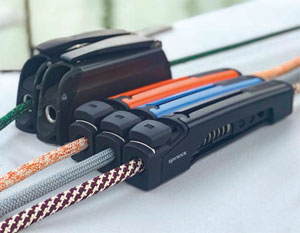 ‘We’ve also been able to reduce the number of deck fixings from four M8 studs to just two M10s, with one at each end of the unit, making it much easier to install. When it comes to operation we have utilised a similar toggle/button concept as we have with the XTX where the toggle line is pulled to draw open the jammer and a button is pressed to release the spring loaded jaws onto the rope. As with the XTX, this jammer can also be operated remotely.’ All of which is pretty impressive, but the true ingenuity of this jammer is revealed when it is taken apart.

Just as with the XTX, lifting one simple stainless steel staple at the rear of the jammer is all that is required to allow the entire inner workings to be slid out of the back of the unit. Once removed, there are no springs or loose items to fall out. Instead the only components that come free are the back end of the jammer and the jaw mechanism. Even when it comes to replacing the ceramic jaws themselves, no tools are required as the rectangular units simply unclip from their mounts.

As those who have used their products will know, simplicity and performance characterise the Spinlock range, yet what most will not have witnessed is the company structure behind the scenes. When you do though, it’s easy to see the hands-on philosophy and approach that forms part of Spinlock’s DNA.

In a world where modern manufacturing often means CNC machines and long lists of overseas supply chains, the majority of Spinlock’s products are built at their Cowes manufacturing facility and assembled by hand.

‘We have spent a great deal of time developing a modern production system that is highly adaptable,’ continues Hill. ‘Of course, that means employing modern manufacturing techniques, but it also requires a workforce that really understands our range of products. The last couple of years have seen unprecedented demand across the range but it’s not always easy to predict some of the fluctuations in demand, so versatility is absolutely crucial.’

So whether it’s their latest jammer or their operation, being open minded and adaptable is at the heart of a company that is as clearly in touch with its workforce and production techniques as it is with the needs of its customers. And when you see the product and production for real, it’s easy to see why Spinlock has such a reputation for hitting the nail on the head repeatedly, while constantly leading the way.