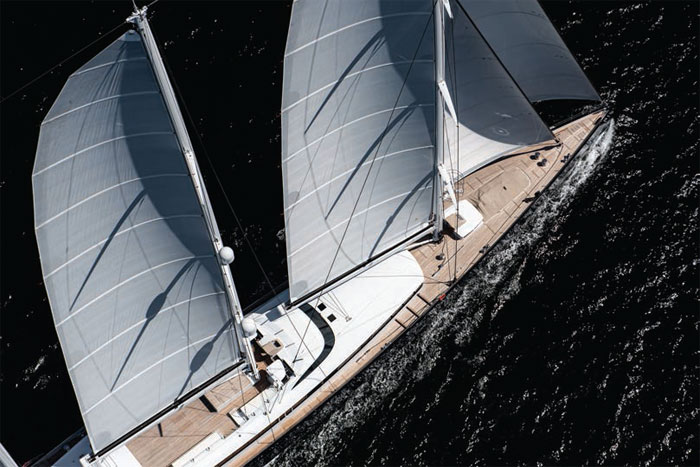 Rondal rigs have earned a reputation for reliability. That’s partly down to the quality of the Dutch company’s spars, the expertise its design office and the inherent benefit of being part of a fully integrated, semi-custom sailing system. But a lot of credit is also due to the highly skilled team of service engineers, riggers and technicians who travel the world keeping the integrated sailing systems with captive winches of the superyacht fleet functioning faultlessly and their ever more enormous masts standing tall.

Until a decade ago it was largely ignored by class requirements but since then the five-year servicing of superyacht rigs has become a necessary requirement. At the same time, the carbon rigs of the largest yachts in particular have become much more sophisticated. To keep them maintained and properly tuned, a lot of specialised knowledge is required and that’s where Rondal’s service team excels.

‘Each one is a project in its own right,’ says Wim Mooiweer, the leader of the team, which comprises six fulltime staff plus 10 trusted contractors. ‘It starts with a conversation between us and the captain or crew, discussing any issues they may have had. And in the case of very large yachts like the 70+ metre ketch we’re working on next, preparation – finding the right cradles and so on – will have to start several months ahead and the crane must be ordered weeks in advance.’

While Rondal’s service team travels all over the world, most of their major service and refit jobs are at four key sites which have the necessary facilities on a large enough scale: the B92 shipyards in Barcelona and La Ciotat, the superyacht service hub of Palma and Pendennis in Falmouth. Up to four rounds of site visits may be needed for a single job, some of which can take three or four weeks to complete.

The first task when the team arrives, after sails and booms are removed, is to de-tune the rig. ‘We need to make sure that we know all the settings,’ says Henk van der Vaart, who spent 30 years as a grand prix racing sailor, superyacht skipper and build manager before joining Rondal as a service coordinator. ‘Then we start setting up lifting strops. New masts have integrated lift points but older rigs must be stropped.’

Main picture and below: The carbon fibre masts of the largest yachts have become a lot more sophisticated in recent years. Highly specialised knowledge is needed to work on them and that’s where Rondal’s service team excels. One of their recent jobs was to commission the rig of the new 81-metre, 1,100 Gross Ton Royal Huisman ketch Sea Eagle II 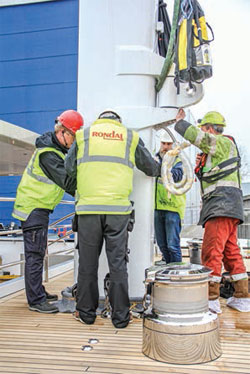 With the crane in place and strops secured, the rig is de-jacked, turnbuckles slackened and pins pushed out, then the huge headsail furlers are slowly moved parallel to the mast as the crane lifts it clear of the deck. Next, the mast is re-stepped on a dedicated ground base with a strong steel beam beneath it, and its stays tensioned up again to support it. Finally, a second crane or large forklift rotates the mast from vertical to horizontal, it’s lowered into its cradles and everything is methodically taken apart. It often takes four people to remove one piece of rigging cable and there can be 14 on each mast. Solid carbon rigging can easily be damaged if this is not done carefully.

The work is meticulously planned but with many variables outside the team’s direct control, they often need to find quick, creative solutions to a wide variety of problems when they arrive on site – even in one of their preferred locations. ‘We recently had to extend a shed by putting a shipping container next to the doors,’ says van der Vaart. ‘And with a 70+ metre ketch the unstepped mast tube in its cradles is more than four metres off the ground, because of the spreader angle, so we need cherrypickers to work on it.’

Rondal conducts a visual inspection of the entire rig, plus dye-penetrant testing of all metal parts. Meanwhile, an independent contractor – often International NDT – scans the mast with ultrasound, using techniques such as phased array, and the standing rigging supplier does its own tests. The host shipyard or yacht’s crew organise the re-painting of the spars, which can take ten weeks, and then the Rondal team is back on site to reassemble the rig, step it and tune it, working closely with colleagues in the design office if the rig and sails require their input, for another five years of reliable service.

‘For racing and cruising superyachts the setup is the same,’ Mooiweer says. ‘And we have the same goal of ensuring a safe rig that will perform in all circumstances.’