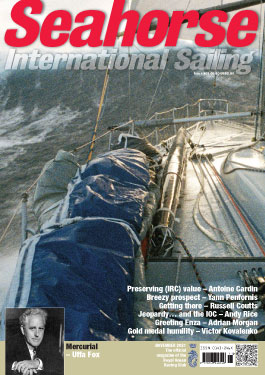 Finesse
And a closer look at how you keep an ‘older’ production racer at the top of the IRC pile. ANTOINE CARDIN

Mercurial
There’s no other word that better sums up UFFA FOX – a nautical polymath who changed the face of sailing design not once but several times over. JULIAN EVERITT discovers what he had missed

Update
The America’s Cup and why nothing (ever) really changes; stepping away never makes life easier, remembering Tim Colman… the man who really started it all, a poignant and dangerous welcome home, could this be an offshore game-changer… and why many great sailors never really grow old. JACK GRIFFIN, TERRY HUTCHINSON, PAUL LARSEN, ADRIAN MORGAN, FITZ…

World news
Class40… the Laser story all over again? Plus ‘les’ modern cockleshell heroes, not a ‘Fastnet Mal’ nor a ‘Fastnet Magnifique’, do some very nasty (getting nastier by the day) goings-on in New Zealand mean that we now all end up in the Middle East after all, the beauty of a return to serious racing, gold medal humility, US match racing… on the way back? BLUE ROBINSON, IVOR WILKINS, PATRICE CARPENTIER, DOBBS DAVIS, NACHO POSTIGO, CARLOS PICH, VICTOR KOVALENKO, VINCENT LAURIOT-PREVOST, GRANT DALTON

IMA – The green-eyed monster
The Maxi fleet could not wait to get racing again but it was not long before the politics of envy reasserted themselves. ANDREW MCIRVINE

Seahorse build table – Quiet success
… and, yes, in this field we are 100 per cent biased