On top of his brief 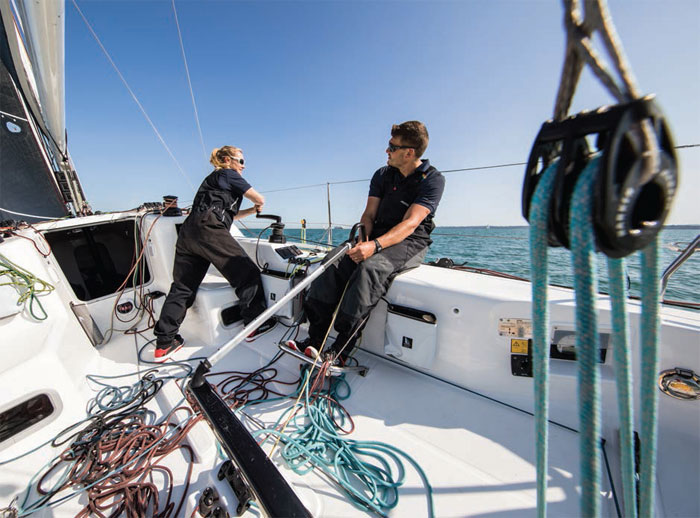 Give a shorthanded specialist an exceptional range of new shorthanded oriented designs to promote... no wonder it’s going so well

Hamble based Sea Ventures’ day to day operations sees the company continue to be the most active of the Jeanneau distributors, but several of their staff have a passion for a style of sailing that has not only delivered more sales but has brought business and pleasure even closer together.

Among the band of UK amateur solo sailors, Sea Ventures’ managing director Nigel Colley has been both competitor and one of the key players behind the growth of the Solo Ocean Racing Club (SORC). So, when Jeanneau started producing a number of models in the Sun Fast range that were designed specifically for shorthanded sailing, Colley knew exactly where their target market lay.

It was the Sun Fast 3200 that triggered the growth in this area for the French production builders with a design that was aimed at the doublehanded Transquadra race. Since then, the range has been developed, refined and extended with the current Sun Fast 3300 proving to be a very potent and popular machine with more than 70 built.

But it is not just the prestigious 600nm race that is the focus. Covid restrictions over the last year have meant a re-think in the way that meaningful racing could take place and has accelerated what many believe was a change that was already happening.

One of those changes has been the formation the UK Doublehanded Association which created the inaugural UK Doublehanded Offshore Series which this year comprises six offshore races culminating with the Rolex Fastnet Race.

Main picture: The Jeanneau Sun Fast 3300 was conceived and designed specifically for doublehanded offshore racing and has become the weapon of choice in the recently reinvigorated and rapidly growing doublehanded racing community, which includes wellknown sailors like Shirley Robertson and Henry Bomby (above)

‘The association was set up over the winter by a mixed group of experienced and amateur sailors including Dee Caffari, Stuart Childerley, Shirley Robertson and myself, all supported by Kate Cope and Ellie Driver,’ says former solo sailor Henry Bomby who is campaigning a Sun Fast 3300 with Shirley Robertson.

‘Initially, part of the focus was towards the double handed offshore class that was planned for the 2024 Olympics, but the group grew quickly and developed beyond this. The idea was to pick existing races and events that appealed to the shorthanded group and then work with the organisers to the mutual benefit of all,’ he continues.

Careful consideration was given to the size range of boats to ensure good close competition that would help drive the appeal while fitting in with what was already popular.

‘We’ve gone for an IRC rating band of 0.990 to 1.055 which, in broad terms, is around a 32-36ft LOA size range,’ continues Bomby. ‘The rating band means that the range of performance is quite small and helps to keep the racing close.’

This season the series includes five Royal Ocean Racing Club events as well as the Island Sailing Club’s Round the Island Race.

‘The RORC has been incredibly supportive and has really helped in a number of aspects such as providing coaching and consulting with us about the kind of racing that we would like.

‘Looking further ahead we are aiming develop the idea to include events on the other side of the Channel such as the Dhream Cup and Spi Ouest. Aside from being exciting times for shorthanded sailing, the prospect of being able to build the racing on both sides of the Channel is particularly appealing. The French have dominated the shorthanded scene for many years, but as British crews have got together, trained, and developed their sailing, it has raised the bar.

‘The fact is that while the growth of shorthanded racing may have been boosted a bit by the prospect of it being in the Games, it has already become bigger than this and we’re seeing a new sailing community evolve and that’s really exciting.’

From Sea Ventures’ point of view having such a big fleet of Jeanneaus competing is clearly a huge benefit both to the business and this growing community who can benefit from a wide range of help and services. Aside from this, the growth is currently fuelled by a boat that is leading the way.

‘One of the key features is that the Sun Fast 3300 is essentially a scow configuration and we’ve seen how potent this has been in the more extreme looking Mini-Transat boats,’ says Colley. ‘But it’s also the way in which the boat’ sailplan has been configured to match the hull that is creating a boat that is planing downwind in anything over 15kts of wind.’

Whichever way you look at it these are clearly boom times for shorthanded sailing.