Just so darn good (and every single time) 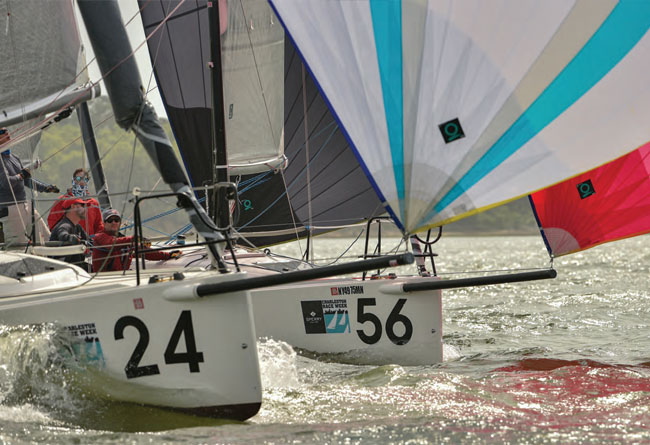 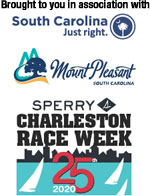 Pinnacle regatta, marquee event, premier race series, you choose... but Sperry Charleston Race Week sort of crept up on the international racing scene and now it's impossible to overlook

When you put a boast out there, you’d better back it up. And that’s just what the people who are behind Sperry Charleston Race Week, the largest multiclass gathering in North America, do. For the better part of the past decade, they’ve billed their event as “a regatta unlike any other.” Fortunately, the claim rings true.

Race Week, as locals refer to it, has evolved to become a fixture on the US sailing scene. For four days in early spring. Competitors from throughout the US and around the globe make an annual pilgrimage to this coastal city in the southeast. During the day, it’s top-level competition with some of the world’s best racers competing. Off the water, it’s equal parts mad party and sailing industry conference. Think Mardi Gras meets Dussel-Boot meets Cowes Week, but on an intimate scale.

Main picture: Sperry Charleston Race Week features a four-day programme of top-level competition in large fleets and draws some of the world’s most talented professional sailors as well as a very high standard of amateur competitors

This April, Race Week will celebrate its 25th edition, and the organisers have every intention of commemorating their silver anniversary in fitting style. In part, that means living up to the reputation they’ve established for regatta innovation.

In past editions, the organisers representing Charleston Ocean Racing Association have introduced new classes (RS 21s and M32 multihulls in 2019), new formats (pursuit and hybrid-pursuit courses in recent years) and novel entertainment aspects, including a late-afternoon pro-am competition. This year, longtime event director Randy Draftz and his volunteer corps have a few additional twists in store.

For starters, the event will serve double duty as the ORC North American Trophy regatta, as well as a pre-Worlds tune-up for the Melges 24 Class - the 2020 M24 Worlds takes place here two weeks later.

‘Each year in the off-season,’ says Draftz, ‘our steering committee tweaks the programming so that we offer additional value for our participants. I think regulars at Race Week expect that because we’ve done it for over 20 years. A lot of the people who compete here know that we make every decision with the competitors’ interests in mind. That outlook is essentially embedded in the DNA of this regatta.’

Draftz isn’t just paying lip service to this notion. In 1998, after the regatta’s third edition, the organisers opted to move Race Week from mid- July to mid-April to take advantage of more consistent seabreezes at that time of year. They were also seeking to diversify the entries by attracting racing yachts that characteristically migrate from the Caribbean up the Eastern Seaboard at that time. And, in the early 2000s, the organisers intentionally froze entry fees for several consecutive years as a way of building participation and keeping the regatta affordable for a broader spectrum of sailors.

In more recent years, the organisers have augmented the Race Week’s programming so that the experience isn’t just about onthe- water competition. It’s also about education and skill building. Working closely with corporate sponsor Quantum Sails, Draftz and company now import sailing luminaries such as Ed Baird and Shirley Robertson, who deliver daily briefings. Aided by aerial videos and graphics projected on the event’s beachfront jumbotron, these experts engage their audiences with savvy tactical analyses as well as pre-race weather briefings. 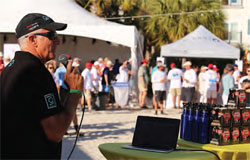 Above: not just a regatta but also a very handy learning experience. Event sponsor Quantum Sails drafts in sailing luminaries such as Ed Baird and Shirley Robertson to give daily briefings.
Below: a Farr 280 at full chat in typical Charleston breeze. Another class which is always prominent at race week is the Melges 24 and in 2020 Charleston Race Week is a key tune-up opportunity for teams racing the Melges 24 worlds on the same waters just a few weeks later. A well staffed race office has the capacity to run as many as seven different race courses at the same time. Roughly 70 per cent of the several hundred entries race in highly competitive one-design keelboat classes such as the VX Ones, J/70s and J/88s as well as the Melges 24s. The remaining 30 per cent race under ORC handicap

Quantum’s participation in this way embodies another attribute that Draftz identifies as vital to the event’s success – longstanding commitment from key sponsors. Sperry has been the title sponsor for the past decade, providing not just financial support, but also delivering tremendous presence at the regatta by way of the company’s singular, tropical-themed retail booth. And Goslings Rum is Race Week’s most veteran corporate partner, having provided huge amounts of its delectable product and branded accessories for the past 15 years.

‘The formula for success here,’ explains Draftz, ‘is equal parts ingenuity and commitment. Our planning team provides the ingenuity and our sponsors provide the commitment. In addition, we like to say that strategic evolution is a key phrase for Race Week. For instance, we held the regatta at a variety of venues around the harbour during the early years, but for the past decade plus we’ve operated out of one of the best venues in the country – Charleston Harbor Resort & Marina. Our regatta village is right on the beach overlooking the marina and the race courses. It’s another reason that attendance at Race Week has remained so healthy.’

In a country that has witnessed major regattas shrink (think Rolex Big Boat Series) or evaporate entirely (think Key West Race Week), the adaptive outlook of Race Week’s organisers is commendable. Consequently, it was no surprise that three years ago the committee opted to expand participation by offering scoring under ORC, along with the PHRF and one-design formats they’ve long used. The move initially drew a fleet of five 26-foot keelboats. Three years on, 24 of the event’s 220 entries competed in four classes using the ORC rating and scoring system. This growth in the world’s largest measurement-based rating system prompted the organisers to score the prestigious Palmetto Cup – one of two perpetual trophies that have always been part of this regatta – under ORC.

Despite this embrace of ORC, one-design entries remain the bread and butter of Race Week. For the past 10 years, roughly 70 per cent of the boats competing here have been one-design keelboats, ranging in size from VX Ones to Melges 24s to J/70s and J/88s. A majority of these entries are trailerable sportboats from ubercompetitive classes. And that means discerning competitors accustomed to well-managed events. If this were a second-tier regatta, many of these sailors wouldn’t be drawn to the Carolina Lowcountry.

‘Over the past 25 years,’ explains Draftz, ‘this event has steadily built the kind of assets and resources it needs to allow us to run up to seven different race courses simultaneously. That’s a high bar. But we’re able to do it thanks to the more than 200 dedicated volunteers on the water and the fact that we import some of the top race officers in the sport. The caliber of race management here is just one of the things that make Race Week a regatta unlike any other.’