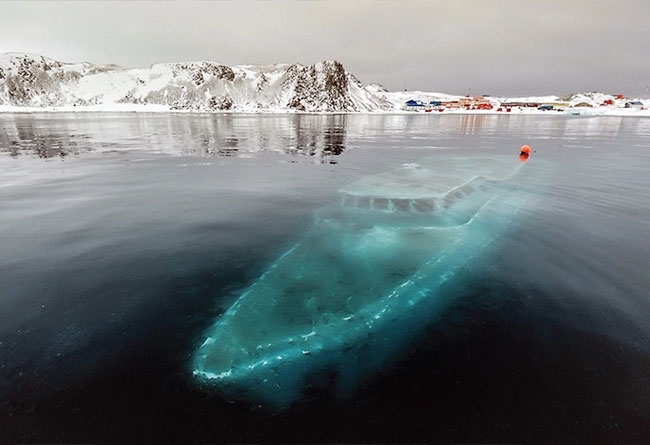 Old GRP yachts don’t die, nor are they very good at just fading away. But things are changing…

'See first that the design is wise and just; that ascertained, pursue it resolutely’
William Shakespeare

Sustainable development is traditionally defined as something that meets the needs of the present without compromising the needs of the future. Using innovative thinking to advance sustainable practices is core to The Schmidt Family Foundation’s 11th Hour Racing programme. One area in which the programme is now involved is the delicate but still largely overlooked issue of the disposal of obsolete leisure craft…

OR HOW THAT SLEEK RACER/CRUISER MAY END ITS DAYS AS CEMENT…
– Evan Ridley and Dennis Nixon
Space is a precious commodity at the Rhode Island State central landfill: in 2038 the 1,040-acre site will stop accepting new material. The looming deadline has made one waste problem more complex: what to do with old fibreglass hulls?

The steady accumulation of end-of-life vessels in coastal communities across the United States and Europe has sparked discussion around a variety of intertwined environmental and economic issues. Currently, the most common destination for these ageing craft is the landfill or worse: abandoned in backyards, boatyards or local waterways. Landfill managers typically use a simple mechanical process to cut and crush the glassfibre mat, polyester resins and ancillary material, subsequently compressing and burying remains within the greater mixture of municipal solid waste.

Based on the established estimates of national end-of-life vessel populations, these traditional processes are already burying millions of metric tons of fibreglass around the world each year. This practice is a mistreatment of usable composite material and is environmentally perilous waste management.

Between 2003 and 2012 it is estimated that two million recreational craft (an average of 210,000 per year) were retired in the United States, according to surveys by the National Marine Manufacturers Association. Similar approximation has not been established in the European Union; however, leading members of the European boating industry suggest that coastal nations in the EU retire between 6,000 and 9,000 recreational vessels annually.

The size of a globally expanding legacy fleet of expired recreational boats has reached a critical point. This calls for a reinvention of disposal practices. For example, in 2015 the Rhode Island landfill accepted 60 boats to be scrapped. This group of 60 constitutes only 8.5 per cent of the estimated 700 fibreglass vessels retired from registration in the state that year. The Ocean State finds itself in a position to be a leader in the reinvention of fibreglass disposal.

The recycling and reuse of fibreglass has long been viewed as unmanageable. Now new advances in chemical engineering have made sustainable composite materials a feasible goal. Fibreglass is a suitable candidate for repurposing thanks in part to its chemical composition and high production value. Activity in Germany over the last 10 years has shown fibreglass to have significant potential as an alternative fuel for cement production in industrial kilns.

In response to these challenges cement manufacturers are experimenting with alternative fuels derived from waste sources. The value of these alternative fuels lies in their ability to mimic the thermal and chemical qualities of traditional fossil fuels when incorporated in the kiln. The composition of vessel-derived fibreglass waste contains the combined equivalent qualities of coal, limestone, sand and alumina. These substitutive properties ensure that all elements of recovered fibreglass are utilised, leaving no residuals behind. Thus fewer fossil fuel and raw materials are used and total emissions are reduced. This is an economically exciting opportunity compared to other composite recycling processes including ‘wasteto- energy’ incineration, which generates significant byproducts, including toxic ash that must be landfilled.

Rhode Island Sea Grant’s objective is to create a system reusing a valuable form of solid waste. Rhode Island’s small size and status as a marine industry hub make it an ideal laboratory for experimenting with an international solution. Sea Grant has taken the first steps toward introducing fibreglass into the growing stream of American alternative fuel aggregates.

The extent of future roles within the proposed programme will rely on the continued interest of the US cement industry. A successful end result could create new economic opportunities for boatyards, marinas and manufacturers while enhancing the capacity for sustainable growth in recreational boating.
Dennis Nixon is director of Rhode Island Sea Grant and advisor for 11th Hour Racing. Evan Ridley is research assistant at Rhode Island Sea Grant and the University of Rhode Island

A SUSTAINABLE BUILD PROCESS BEGINS WITH DESIGN
– Dr Richard Schuhmann, the Landing School
The Landing School in Maine was founded in 1978 as a boatbuilding and design school that prepares students for careers in the marine industry through hands-on and academic learning experiences. The Landing School also offers the only current residential yacht design degree programme in the United States.

The school is now undertaking a programme to incorporate the tenets of sustainable design and development in the construction of composite – including wood – boats with very low, zero or net negative carbon footprints. The school is developing a workable Life Cycle Assessment (LCA) tool to understand the feasibility and in 2016 received a grant from 11th Hour Racing to support its work.

Back to the future
In early 2017 the school was awarded a further grant with its partner Maine Maritime Academy, from the Maine Economic Improvement Fund, specifically to build a proof of concept lo- impact commercial trimaran. The innovative 38-footer was developed by Prof Doug Read and will be built in 2017-2018 at the school, with material selection guided by the revised 11th Hour Racing LCA tool.

Top to bottom: perennial raceboat enthusiast Peter Morton just beat the chainsaw to the famous Farr-designed Half Tonner Swuzzlebubble in 2013. Now fully restored, this iconic race yacht has just won the Half Ton Classic Cup for the third time; dying a slow death off Coconut Grove… a scene repeated in every creek and harbour in the world; a famous yacht familiar to many of our ‘more experienced’ readers, the Ron Holland-designed Admiral’s Cupper Silver Apple rots away up the Beaulieu River in England 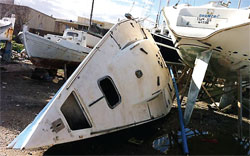 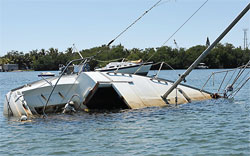 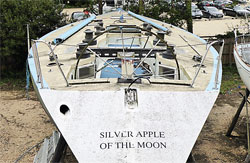 What is an LCA tool?
A Life Cycle Assessment (LCA) is a forensic analysis of a product, process or material’s impact upon operational efficiencies and the environment. LCA commonly supports manufacturing decisions and is rapidly becoming an integral tool for manufacturing planning.

Why would a builder/designer be interested in an LCA?
Through a product’s life there are myriad opportunities for inefficiencies and waste. While these can be thought of as ‘pollution’ they also represent tangible financial losses to a builder. Tracking these losses with a LCA tool and mitigating them, a builder can get paid for cutting down on manufacturing pollution. Consumers also now increasingly lean toward greener products wherever possible.

How do you develop an LCA tool?
An LCA tool is an algorithm for bean counting – among the most common ‘beans’ are material waste, storm water, dust, toxins and air pollutants. This process begins by identifying a list of the primary materials used. It is possible to get too granular and lose the ‘forest for the trees’; in a perfect world (of infinite time and money) every screw and paper towel used is included in the tally of materials; however, recent literature has shown that through intelligent deliberate under-specification of materials (excluding trivial players) it is possible to arrive at an LCA that is credible and affordable.

LCA in other industries
LCA is a mainstream tool for environmental assessment across all industry and ISO 14040 (2006) currently provides a unified framework for performing LCA. For example, the LCA for the BMW i3 car includes an analysis of the production of ‘raw’ materials and manufacturing, through the use phase to recycling, with an impact assessment performed based on the Institute of Environmental Sciences’s (IES) method developed at the Dutch University of Leiden.

A carbon footprint vs an overall impact footprint
In the Landing School LCA, fossil CO2 emissions are accounted for in three ways: material extraction, material processing and manufacturing and associated transportation. We call this a ‘cradle-tocommissioning’ assessment – tracking the materials’ CO2 footprint from the forest or factory to the boat leaving the facility ready for use. Because we use large quantities of wood it also accounts for the CO2 sequestered within that wood.

Why focus on design and not operation?
As designers and manufacturers of boats, we are in a position to quantify our impacts and effect change within these domains. We focus on designing efficient hulls and material and manufacturing processes to mitigate impact on the environment. We do not design and manufacture propulsion systems. Whether a 19ft runabout is propelled using an electric outboard charged by a solar panel, or by a two-stroke engine is the decision of the consumer. How that consumer chooses to operate and dispose of the boat at the end-of-life is also outside the parameters of this process.

Industry interest
Although still a prototype, the Landing School LCA tool has received good interest from the marine industry. Copies have been supplied to Sabre Yachts, Goetz Composites, Sparkman & Stephens, and Stephens Waring Yacht Design for beta testing. We continue to develop the tool based on the feedback from these New Englandbased companies to create a robust, user-friendly product.
Dr Schuhmann is the president of the Landing School and a Landing School wooden boatbuilding graduate (1987)