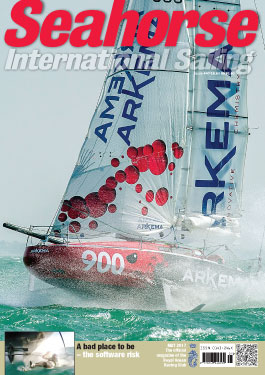 While stocks last
This summer in Bermuda promises to give us the most dramatic America's Cup in the event's history... and the ticket store is open

The same but different
Why there may be little foil symmetry under the surface on the new ACC designs. KEN READ

One (in seven years) is too many
It’s been a long time since there was a serious coming together between TP52s. ROB WEILAND

The tireless pursuit of improvement – Part III
Obsessive, almost certainly. Kind and supportive of others, definitely. TIM JEFFERY concludes his look back at the life of PAUL BERT ELVSTRØM

A race like no other
… or the best alternative to a cold winter at home, you will find!

Don’t be a lemon
Get ready… Sailors for the Sea has signed up over 1,000 regattas

Update
BILL FICKER really was quicker, simpler dinghies and why those bicycles are only one small part of the Team New Zealand story. TIM JEFFERY, JACK GRIFFIN, TERRY HUTCHINSON

Paul Cayard – (Now) a clash in name only
Could the modern America’s Cup and today’s Volvo Ocean Race have grown any further apart?

IRC column – Well, I wouldn’t start from here
JAMES DADD has been kicking back at his French farmhouse and taking the long view

Design – We must have lighter, nimbler and cheaper IRC designs
MARC LOMBARD and ERIC LEVET make clear their thoughts to FREDERIC AUGENDRE

Seahorse build table – (Definitely) a cut above
MICHELE PITRUCCI has given us a very clever, very user-friendly and very fast new foiling cat