Leaving the world behind 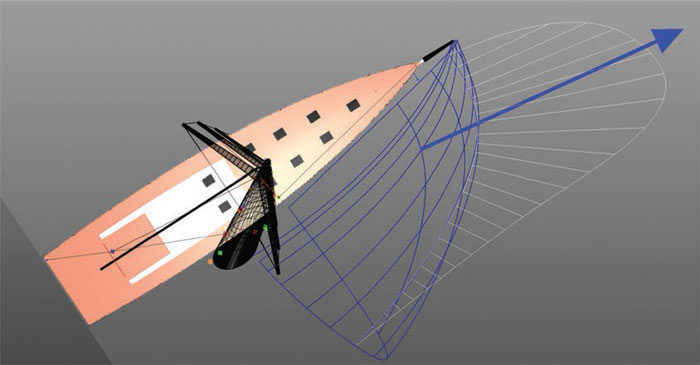 Imitation really is the sincerest form of flattery for the generous folk behind Doyle’s brilliant Structured Luff technology. Greater forward thrust, kinder on your rig, forgiving to trim... what’s not to admire?

After eight years of developing and validating the performance benefits of its Structured Luff technology, Doyle Sails passed a significant milestone this year when the concept reached the market-acceptance tipping point to become mainstream. ‘Customers have seen and understood the benefits of Structured Luff technology and increasingly the pro sailors advising owners are pushing them in this direction,’ says Doyle Sails CEO Mike Sanderson.

Any number of business school studies have shown how innovations, be they screw-top wine bottles, online shopping, electric cars or sails, follow a rite of passage from resistance to acceptance, charting how markets let early adopters risk the leap to test their merits. Ultimate validation comes when rival brands shift from demonising the disruptive newcomer to launching their own versions.

Sanderson has watched Structured Luff pass through all these stages, greeting the new imitations with a philosophical shrug. ‘We could either be offended or flattered’ he says. ‘We choose to be flattered. The industry is well aware of how this all began.’

It began in 2013 when Sanderson came up with “a crazy idea” for a Code Zero for the Maxi 72 Bella Mente. To get around the 75 per cent mid-girth measurement rule for asymmetric downwind sails, sailmakers were looking for ways to create masthead Code Zeros that could be sheeted flat as the apparent wind moved forward.

The standard solution was a genoa-type shape supported on an integral luff cable, with superfluous material attached along the leech to achieve the 75 per cent mid-girth target. As the trimmers cranked up the luff load and sheeted on hard, the excess leech material flapped away – disturbing windflow and losing efficiency.

Sanderson’s idea was to build vertical structure into the natural leading edge load lines of the sail itself and meet the mid-girth dimension by shifting superfluous material from the leech and placing it ahead of those load lines.

Making that concept work relied on the “genius” of designer Richard Bouzaid, according to Sanderson. Bouzaid ran a structural study and came up with one-piece vertical panels that would take the load and allow the sail to set up without a cable. Because of the curved shape of the load bearing vertical panels, he described it as a lens.

‘The first trial was a 90 per cent success,’ Sanderson recalls. ‘The design was a bit compromised as we adapted an existing sail and the front floppy bit shook around too much, although it did want to fold back along the leeward side as planned. But the big shock was how the sail set up. There was basically no sag. This was a phenomenon we had stumbled across.’

On further development, the Doyle Sails team found that, freed of the constraints of a 30mm cable locking the luff in a bar-taut line from masthead to bowsprit, they could project the lens effect further forward enabling them to meet the mid-girth dimension without any superfluous material. And, in a rare win-win situation, the cable-less version flew straight on the centreline, even slightly positive, under four-ton tack loads, compared with the six tons required for a conventional sail.

Doyle Sails quickly applied for “patent pending” protection of the concept. ‘To get that protection, the authorities first go through a rigorous due diligence process to ensure there is nothing else like it in the market,’ says Sanderson. ‘The fact that we received that protection is clear proof of our authorship.

‘After a year, however, we decided against proceeding with a full patent. We felt it would not be in the best interests of the sport or our owners. We’d rather devote our resources to developing our technology and product than to endless legal fees.’

In the intervening years, applying Structured Luff technology to Code Zeros as well as spinnaker staysails and genoa staysails fully justified the excitement the Doyle Sails team experienced in that eureka moment with Bella Mente back in 2013.

The progression to Structured Luff upwind jibs came about with a major refit on Mari Cha III in 2016. ‘We installed a jib lock, but found we could not modify the furling unit to accept an adjustable tack. So, we retained the existing forestay, but engineered a jib structure with less stretch than the forestay.’ The result was another eureka moment.

‘Going up the wind range, the load ratio switches from the forestay to the jib. As the sail takes more of the load, it gets flatter and, as an extra bonus, the driving force moves forward. They think it is magic.’ This led to another solution for a superyacht owner who had struggled for years with a rig that was too light. ‘The forestay sag was horrendous,’ recalls Sanderson. ‘Where the furler sat in the bow, they kept having to cut a bigger hole, because it was constantly rubbing against the sides. Now, with a Structured Luff jib and staysails, their rig is perfect. From the helm position for the first time you can actually see the headsails sitting straight up on the centreline.’

Below: this aerial shot of the SW96 Seatius shows a complete absence of luff sag. 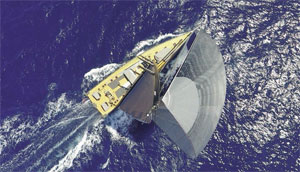 Add an adjustable jib tack to the equation and it opens up the ability to switch the load ratios between forestay and headsail. ‘By playing with the load ratios you can trim the sail shape,’ says Sanderson. ‘It is a bit counter-intuitive, but if you want a full sail shape, you have the forestay carrying about 70 per cent of the load and the sail 30 per cent. For a flatter shape, haul down on the tack, or ease the headstay/runner to reverse the ratio.

‘This has turned out to be quite a big thing. During the 2021 America’s Cup, the teams were playing with these ratios all the time, which enabled their jibs to work across a massive range, upwind and down. Intel suggests most teams were getting a depth range of four per cent between their downwind and upwind shapes, just by playing with tensions and ratios (bearing in mind foiling AC75s always have apparent wind well forward in any mode).

‘The Cup crews were actually doing something similar with their mainsails. Initially, they thought there would be very little mast bend adjustment, but by the end they were using the cunningham ram to induce mast bend and adjust the depth of the sail. American Magic actually introduced a full head-to-tack Structured Luff type lens on their mainsail.’ 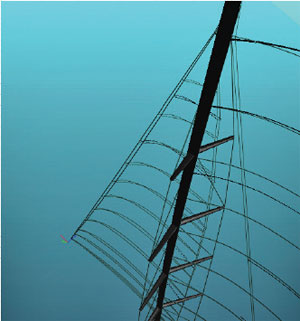 Above and below: for the same heeling moment, Structured Luff  (below, left) delivers 1.7 per cent more thrust and 76 per cent less sideways sag than a conventional sail (below, right) 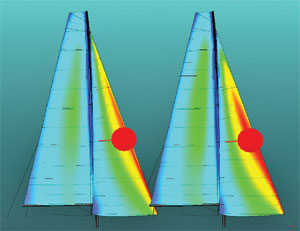 Bella Mente has also developed a Structured Luff mainsail. ‘It was phenomenal how we were able to open the top of the main,’ Sanderson says. ‘The response was amazing.’

As the technology has followed the classic path from resistance to acceptance, owners and naval architects have increasingly become emboldened to bank the gains on offer. ‘You can track that as a linear progression,’ says Sanderson, who recalls a conversation with an owner about to start a superyacht project four years ago. Hesitant about committing to a concept he felt was still experimental, he opted for a conventional set-up. ‘This year he came to us for a racing blade, but was disappointed that, with his conventional forestay swivel, lock and tack arrangement, he would not get the full benefit of a Structured Luff sail. However, we still made some nice gains for him.

‘Since then, every new-build superyacht that we are involved with has embraced the technology to a greater or lesser degree. That’s the beauty of it. Owners can choose their level of comfort and commitment knowing that they will make gains no matter how far they wish to go with it.’

Looking back, Sanderson is grateful to the owners who enabled this technology to prove itself and progress to mainstream acceptance. ’This is not just a Doyle Sails story,’ he insists. ‘It is about the teams we have worked with. Just to name a few: Bella Mente, Proteus, Hugo Boss, Cannonball, Comanche, Info- Track, Leopard, Mari Cha III, Momo, Hetairos, Caro, Beau Geste, Ichi Ban and Deep Blue… the list goes on.’

As for the future? ‘The exciting thing is that we are only scratching the surface with Structured Luff. We will keep developing it and also our Stratis product, which is incredibly adaptable. The last thing we will do is chase gimmicks. Structured Luff is not a gimmick. We pushed it hard right from the start because we had total faith that it was real. We are not in any rush to take over the world. We set out to be a bespoke operation with cool customers who wanted one-on-one attention. We just want to keep doing a better and better job and really looking after the people who have believed in us.’