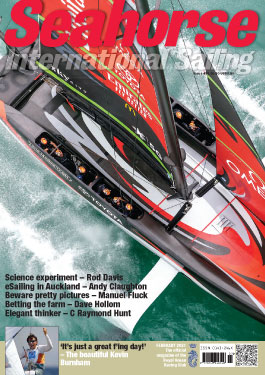 An ingenious mind
C RAYMOND HUNT – famous for his racing powerboats but, as TOM PRICE says, prodigious too in creating fast and innovative sailboats

Ee by gum!
ANDY CLAUGHTON is looking forward to the world’s biggest ever eSailing Regatta down in Auckland

Neck on the line
Who’d volunteer to be an America’s Cup pundit, especially among the tense, dark swamps of AC75 design? DAVE HOLLOM, obviously

The finest meals will always require the best ingredients

Update
Match racing round the world, are foilers the answer (or is it the wrong question), CHARLIE DALIN master boatbuilder, serious times in Kiwi, with a lot still to learn… and are we all heading up a blind alley? PATRICE CARPENTIER, JEAN LE CAM, MRS LE CAM), JACK GRIFFIN, TERRY HUTCHINSON, ROBERT LAINE

Rod Davis – Party time
The games begin… Plus the good, the bad and the plain incomprehensible

ORC – A tough job
More people are spending more money and are making (much) more effort to race big multihulls competitively so it’s only right that the scoring too should be more accurate. DOBBS DAVIS