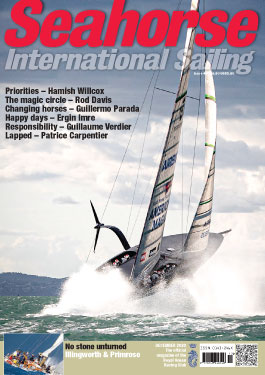 On all our heads
Playing to the spirit as well as to the letter has never looked more important. ROB WEILAND

They rewrote the rulebook
Verdier, Raison, S&S, Peterson, Holland, Briand, Juan K, Farr, some of the names that spring to mind when talking revolution in racing yacht design. But ILLINGWORTH & PRIMROSE had started a revolution of their own long before any of these names came onto the scene. JULIAN EVERITT

Behind the scenes
A spectacular Olympic classes career that ended with the most unjust of finales and then another dazzling career as an Olympic gold medal and America’s Cup-winning coach. So not all bad. ANDY RICE talks to HAMISH WILLCOX

Just passing through
There may only be one class starting the Vendée Globe but it won’t seem like that by the third or fourth day of the race. PATRICE CARPENTIER

Missing piece – Part I
ROGER VAUGHAN was hired to chronicle the story of the 2010 Deed of Gift Match from the Challenger perspective. But it has taken a full 10 years for his work to be allowed to see daylight

Only the best is enough

Update
(Scientific) poetry in motion, quite the week, full marks to Genoa, despite that virus, building for the times. Plus a change of steed. GUILLERMO PARADA, JACK GRIFFIN, CARLOS PICH, TERRY HUTCHINSON, MARCUS STAMPER, PATRICE CARPENTIER

World news
Smarter than smart (grounded too), a complex race ahead, and bumpy beyond belief, new ‘US’ faces on the scene, rather late but a grand Spi nonetheless, a little light-prepping for Tokyo 2021 and a few signs of shorthanded life at last out there in the provinces… GUILLAUME VERDIER, JACQUES CARAËS, STAN HONEY, THOMAS RUYAN, SEBASTIEN SIMON, IVOR WILKINS, PATRICE CARPENTIER, DOBBS DAVIS, JAKE LILLEY, BLUE ROBINSON

Rod Davis – The long game
So why did you go out sailing today?