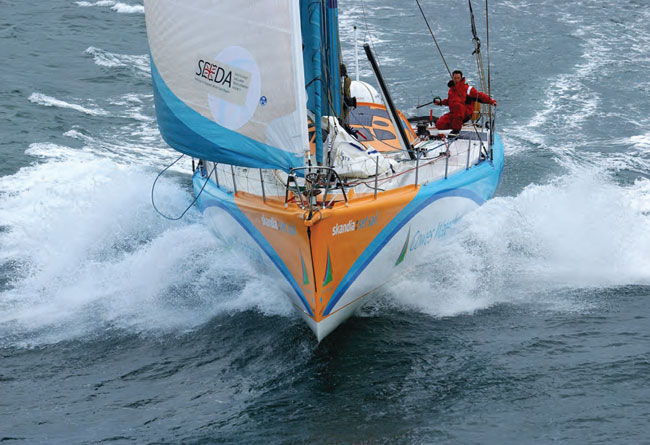 Both the stories and the sailors... powerful and reliable comms has never been so important as in the era of the oceanic ‘speedboat’

Following an ocean race from the comfort of home, watching live video from yachts speeding through the Roaring Forties, you might assume they all have the same ability to keep in touch with the rest of the world. ‘That’s not always the case,’ says Nick Moloney, who has been relying on connectivity in the world’s most remote oceans since the 1997 Whitbread Race. ‘During the last edition of The Ocean Race, the home viewer experienced a connection to offshore yacht racing like never before. This was delivered by the event partner Inmarsat, and the systems and hardware were exactly the same from boat to boat. That event-sponsor partnership established a whole new benchmark of what is achievable in regards to connectivity and content transmission from the most remote parts of our oceans.’

Unlike The Ocean Race, for many other events – the Vendée Globe, for example – there are various systems and service level agreements that competitors can choose from, and these decisions can actually be amongst the most critical of the entire campaign. Given that carbon fibre creates satellite signal black spots, boat design and sail materials are part of this early decision process.

From a safety perspective, Moloney’s opinion carries a fair amount of weight. In the 2004-5 Vendée Globe, having good satcoms probably saved his life. Fighting for survival after several brutal 130- degree knockdowns in eight-metre breaking waves and hurricane force winds, his mental state was understandably in tatters. ‘There was a heartbreaking moment when I was told over the satellite phone that there was no chance of rescue if required,’ he recalls. ‘A survey ship was at Kerguélen (about 500 miles away) but conditions were so bad that they couldn’t leave the port. I actually called my father to say goodbye, that’s how sure I was that it was the end.’

Main picture: Nick Moloney had a rather eventful Vendée Globe Race in 2004-05, surviving multiple knockdowns in a Southern Ocean storm and then the loss of his keel. Having reliable satcoms on board helped to save his life. He is pictured in the same boat during the Transat Jacque Vabre in 2003.
Below: more recently Moloney has been using Fleet Xpress to stream amazing live videos from his adventures to remote locations

Race Control and the rescue unit tracking Moloney’s situation were emailing and calling his boat via his onboard satcoms every hour, on the hour, providing as much reassurance and advice as possible – it was still blowing Force 11 with a sea state that few of us can imagine. ‘It was difficult for me to pick up the pieces after that 48 -hour storm, both emotionally and mechanically,’ Moloney says.

He spoke frequently with his shore team who talked him back into action and gradually Moloney regained the resolve to repair his broken boat, get its systems running and carry on sailing. ‘I was just focused on exiting the Southern Ocean and rounding Cape Horn,’ he says, ‘and 10 days after that my keel fell off.’

With luck and skill he avoided capsize, and once again the reliable satcom link was a godsend. He was towed to Rio and 10 months later, with a new keel, Moloney sailed back from Brazil to a hero’s welcome at Les Sables d’Olonne to complete his solo circumnavigation of the globe.

In his subsequent adventures, Moloney has always sailed with the best possible satcoms on board. ‘It’s one of the basics,’ he says. ‘There is an enormous competitive advantage in identifying this and I engage with Inmarsat as they deliver the most reliable global coverage. From a performance perspective, whatever software you use for navigation, if you don’t have the connectivity to update information, such as weather files, while your competitor is receiving this vital knowledge ahead of you, this loses races, it is that simple.’

Also crucial for any pro sailor is the ability to service sponsors. ‘During my Vendée Globe I was one of the few sailors who managed to get a Christmas message off the yacht in heavy Southern Ocean conditions,’ Moloney says. ‘And that message closed out the national news in France on Christmas Day, creating enormous exposure for my sponsors. You have to earn the right to have sponsors and you do that by winning, obviously, but also by taking their brand to an audience via stories.’

In between racing commitments, which include a two-handed offshore Olympic campaign with Adrienne Cahalan, Moloney is increasingly focused on adventure projects. Earlier this year he was sailing in Antarctica with an expedition to mark the 200th anniversary of its discovery and he will next explore the Arctic latitudes. ‘Antarctica is incredibly raw and remote, it’s a humbling place where you feel real exposure,’ he says. ‘Just like ocean racing, for remote cruising you absolutely don’t skimp on communications.’ For these projects Moloney shares his awe-inspiring content with the world via Inmarsat’s high-bandwidth Fleet Xpress.