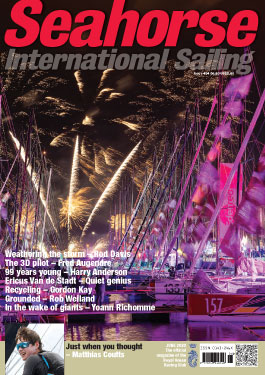 A perfect fit
When one of the world’s most successful software magnates goes TP52 racing you can only expect the electrons to draw their attention. JONAS WITT and ANDI ROBERTSON

Quiet genius
The next subject for Seahorse’s latest series on the great yacht designers should perhaps have been the first. Our former editor JULIAN EVERITT looks at the myriad influences that ERICUS VAN DE STADT has had on the sport, many of which continue to play a part today

More than a racing stripe
When the owner of the slippery but tippy 60ft CBTF design Wild Joe decided to speed up his craft he certainly went for it. GORDON KAY

Into the third dimension
There has been little noise around the decision to allow in autopilots for crewed offshore races. But with the latest pilots from France things are not going to be quite what many seem to think. VINCENT RIOU, FRED AUGENDRE and MATTHIEU ROBERT set out the new landscape

99 years young
The Anderson course has long been a favourite among team-racers especially; time to catch up with the man who gave it its name. CAROL CRONIN sits down with HARRY ANDERSON for a lifetime of sailing anecdotes in an hour

Number One
The top offshore boat in Australia… no decision there, ‘mate’. ROB KOTHE digs into the Ichi Ban secrets with WILL OXLEY and MATT ALLEN

Starting at the top

Another day at the office

Rod Davis – Weathering the storm
Just how big are these big changes going to be?