Foiling for (almost) everyone 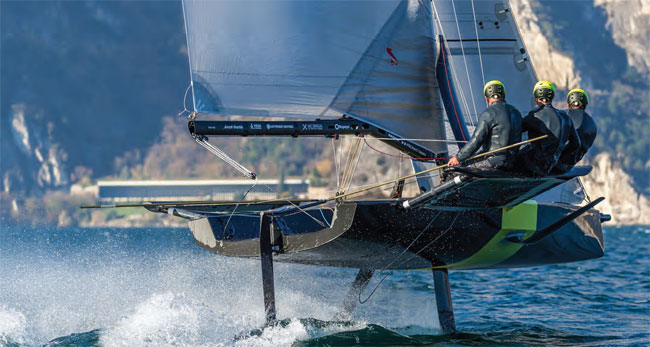 Widening the appeal... fast yes, but the 69F is also optimised for easy handling

The thrill of foiling above the sea under sail need not be limited to America’s Cup or Open 60 boats sailed by professionals. One perfect example of this “foiling for everyone” is the 69F concept developed by the yacht designers Wilson Marquinez (MW Naval Architecture, Buenos Aires), with the initial idea going back to 2016: a foiling monohull sportsboat that should be as simple as possible so that it can be enjoyed by a wide spectrum of sailors; young or old, advanced or beginners.

These ideas were discussed with Luca Dede from One Sails and pro yachtsman Maciel Cichetti. The emphasis was on safety and slow “take-off” speed, so that this boat can foil even at low true wind speeds. What they created was a performance design using the latest technology for a monohull one-design class with a sleek hull that already sails fast in conventional mode, without foils.

Despite this, the desired low takeoff speed was a real challenge. Laureano Marquinez explains: ‘Drag is the key factor here and a monohull is at a disadvantage in comparison with the very slender multihulls, which, for a while, were the main driving force in foiling evolution. ‘There also were some practical aspects that constrained our hull such as the space to locate foils where needed, relative to the mast, to allow the up-down system to be simple enough and to withstand reaction loads, and also to have room for the appropriate rake systems,’ adds Nahuel Wilson. ‘It might look small but this boat has all the complexity you can ask for given the goals we were aiming for!’

‘We contacted Nicolas Rousselon, an old colleague and expert in CFD at Artemis Technology, to do the runs we needed to validate our concept assumptions and start defining hull and appendages configuration and details. The aim was to have around 90 per cent of the displacement on the foil at around 10kts boatspeed. With that in mind, general size, strut and tip angles (diahedral), local sections’ angle of attack along the foil (to load or unload strut and tip), foil section shape and camber were all studied to make the package as efficient as possible at the speeds of interest,’ explains Marquinez.

This task was not made easier by budget restrictions. Designing a second foil after testing the prototype was ideally to be avoided. The first foil needed to be absolutely right. The team managed to achieve this and, with so many new aspects in this boat, that is actually quite a feat.

Rake range for example is just another aspect studied within the parameters of foil design. ‘The rake sets the range of load you can get from the foil so this needed to be defined in conjunction with the general size so we could get enough lift at take-off speeds, but also unload the foil as required when flying at high speeds,’ says Wilson.

Main picture: the 69F takes flight on Lake Garda after three years of development. Wilson Marquinezʼs new one design racer aims to make the thrills of foiling accessible to a wider range of amateur sailors.
Below: with an all-up weight of 360kg and 40m2 of upwind sail area, this 21ft next-generation sportsboat starts to fly at just 10 knots. It also performs remarkably well and handles easily in conventional mode with foils retracted 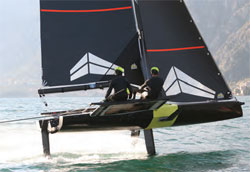 Another consideration was the size and angle of the rudder winglet in relation to the crew position. This boat is relatively small and sailed by a crew of three, which together represents a high percentage of the overall sailing weight. For reasons of handling simplicity, it was very important to reach foiling equilibrium with normal crew positions and without the need for them to move much forward or aft throughout the full boatspeed range. This determined the rudder rake system and winglet size. After the first sail trials, the rudder foil was enlarged slightly to improve lift during manoeuvres.

Apart from that, trials showed the boat to be on target with regard to take-off, upwind VMG and overall speeds with some higher top-end speeds than expected. The following process of refinement mainly concerned deck hardware layout and the daggerboard and rudder rake control. Umberto De Luca is the project manager of the boat and is very happy with the results so far.

Another novelty with this boat is the 69F Academy, which aims to help sailors enter the foiling world. This is especially useful in view of the newly announced 69F Cup and Super Cup to be sailed throughout 2020. Five events, each a week long in locations around the globe, will allow crews to collect points for access to the final Super Cup Race to be sailed in December 2020 in Dubai.

The unique 69F Academy aims to help sailors, young and old, experienced or newcomers, to get the best experience out of this amazing boat, which in some ways is quite similar to the new foiling monohulls of the forthcoming America’s Cup. Learn to fly the boat like the AC pros, with the 69F Academy!