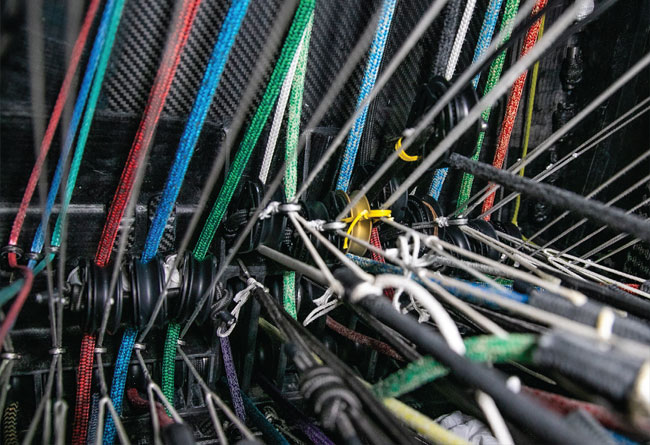 Over several cycles of gruelling and competitive ocean races like the Vendée Globe, Route du Rhum, Transat Jacques Vabres and others, the Alex Thomson Racing team has demonstrated a continued focus on technical innovation. With this team’s ambitious and innovative approach, it’s not surprising they chose UBI Maior Italia as their primary provider of blocks and associated deck hardware.

The innovations seen in the new Hugo Boss, which launched in September, are no exception and the ocean racing world is abuzz as the team prepares to race the boat for the first time in the Transat Jacques Vabre. The new boat features a distinctive new hull shape and centralised, enclosed cockpit design, from which Thomson will be managing the boat’s sailing systems while staying dry.

The line handling systems aboard Alex Thomson’s latest Imoca, Hugo Boss, rely on 150 blocks from UBI Maior. Six new models were specifically designed and custom made in 6082 aluminium, titanium and 3D printed plastics. The demanding brief required UBI Maior to create unique new solutions the fruits of which can now be used elsewhere 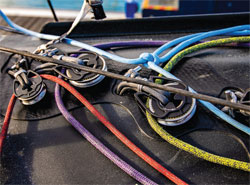 The punishing environment the elements produce in these races presents an extreme challenge to equipment reliability, and along with the phenomenally high competitive drive of the teams to push their limits to make gains, the result is a highdemand setting that would scare off most suppliers.

Yet the team at UBI Maior Italia rose to meet this challenge with enthusiasm, having been patient to await their chance to break into what has been primarily a setting dominated by parts and systems made in France.

‘I followed the last edition of the Vendée Globe with a little more attention than in other cycles’, says Fabio De Simoni, sales manager at UBI Maior Italia, ‘because we had completely equipped Pieter Heerema’s No Way Back when it was built by Persico as Vento di Sardegna for Andrea Mura. We were more than just curious and had a healthy anxiety that comes with providing something for a very extreme event and hoping everything goes well’.

‘Obviously I was passionate about the duel between Armel Le Cléac'h and Alex Thomson in that race and felt the desire to supply equipment for the boats that were being used by those at the head of the pack. Among all the competing teams, I reckoned Alex Thomson was the one who surely would do the next edition and certainly was the one that, regardless of the result obtained on the water, always receives a great deal of international attention and success.’

Hardware from UBI Maior Italia had by this time appeared on the radar of the Mediterranean inshore racing circuit, having supplied numerous top teams in the superyacht, maxi, TP 52 and other competitive classes. De Simoni believed that their design and fabrication technology, which had proved successful in these highly competitive arenas, could also be brought to the demanding world of ocean racing and help to achieve similar success.

The dream became reality when representatives from Alex Thomson Racing met with UBI Maior Italia, examined their products and processes, and some blocks were tried on the team’s previous boat in February of this year. With the team impressed, a contract was signed and some 75 blocks were made in six different models with unique solutions found to fit applications in several areas of the boat. Strict attention was paid to minimise weight, but also to maintain safe working loads through a variety of line sizes. With the unique interior cockpit design of the new boat and all the line-handling systems protected, the blocks had to fit within tight size and space limitations.

Matthieu Delaporte from the UBI Maior Italia technical office explains the process: ‘We did some finite element analysis on the designs to optimise the materials used within the space limitations and to meet the requirements of the Alex Thomson Racing team. For example, they asked us to use ball bearings in a number of blocks to reduce friction where roller bearings would have been much more resistant. When working with close tolerances, high loads and high velocities you have to be particularly careful regarding the stresses, heat dissipation and shock resistance of the elements you design. Since these guys are passionate about saving weight, we had to thin down the size of the parts and use our lightest materials such as 6082 aluminium, titanium and even our 3D printed plastic where needed.’

‘We are thrilled to be part of this exciting project,’ said Raffaele Di Russo, brand manager at UBI Maior Italia. ‘At last we can show the offshore world what the inshore world already knows about our products.’