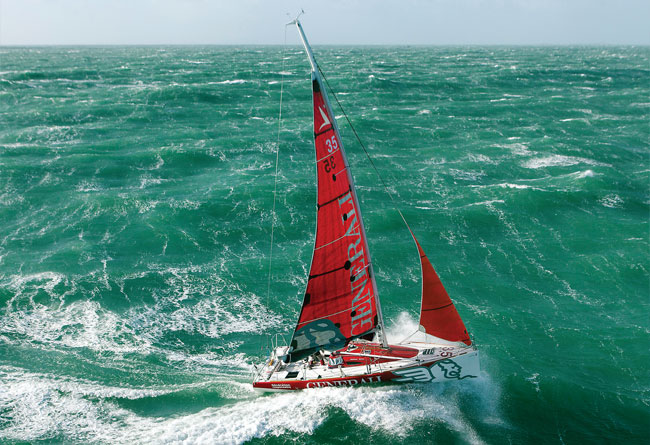 The arrival itself was a little hurried but the opportunity for sailing to showcase the first ever continuous 24-hour Olympic competition is surely not to be missed? The idea that offshore sailing could be an Olympic discipline is not one that drew universal support straightaway, but today the tide is turning.

Following last year’s landmark decision, and as details of the new event start to appear, it is becoming clearer that there are important new opportunities with significant benefits to both the sport and the Olympic Games. Indeed, some now believe this new discipline could provide unexpected opportunities for new sailing nations, while paradoxically also having the potential to be more affordable than some existing Olympic classes. The move is also being seen as having potential to open Olympic sailing up to a broader range of competitors.

It is factors like these that have helped to change conventional thinking by offering a new endurance discipline to the Games, while at the same time bringing the sport of sailing to the attention of a wider audience. This in turn could play a valuable part in securing the future of sailing as part of the Olympic family.

The decision to introduce a Mixed Two Person Offshore Keelboat category for the Paris Games in 2024 was agreed at World Sailing’s 2018 conference in Sarasota. While there is much detail still to be established the intention is to have mixed-gender teams sailing a one-design boat that will be supplied for the Olympic Regatta.

National selections will take place in comparable classes more readily available in the relevant country or region, which is simply representative of the type of boat that will be used during the Games; there is no pressure on competing nations to use the Olympic boat.

The Olympic contest itself will be a single, sudden-death offshore race run out of the 2024 sailing venue in Marseille and will last up to four days and three nights. Whoever crosses the finish line first will be declared Olympic champion.

The pathway for the new discipline was prompted by some key factors, as Australian Sailing president and offshore racing enthusiast Matt Allen, who is also vice-chair of World Sailing’s Oceanic and Offshore committee, explains. ‘Going all the way back to when we were proposing offshore sailing as an event for Tokyo 2020, I think there was a feeling then that it would be a terrific way of showcasing the offshore and keelboat areas of the sport.

‘There are around 70 million people in the world who sail and around 50 per cent of them sail keelboats. Clearly not all are offshore keelboats, but a lot of people do sail offshore as well, so the whole genesis of this was to create an event that would perhaps start a couple of days before the Olympic Games and maybe finish soon after the opening ceremony.

‘This would be an event that would run through two or three nights at sea and would be unique in Olympic Games history. This alone would make sailing stand out, but in addition it would offer a range of broadcast benefits for those in other time zones where there may not be any live events taking place during their daylight hours.’

As it turned out, the plans were too ambitious to be delivered in time for Tokyo 2020, but the idea struck a chord. Looking ahead to the next Olympic Games and given a longer runway, along with France’s traditional enthusiasm for offshore sailing, Paris 2024 was quick to embrace the new concept. Other key influencers were onboard too.

‘As sailors we know that a lot of the racing we do is basically endurance sport as we sail overnight; I think this new class will reflect that in the Olympics,’ said Oceanic and Offshore committee chair Stan Honey.

‘The fact that this will be the longest endurance event in the entire Olympic Games also reflects well on sailing. I think it’s good in a variety of ways… from having a broader reach across the sort of sailing that lots of people do and then positioning sailing distinctively in the Olympic Games, while also making it easier to understand.

‘This class will be as simple as the Olympic marathon: the first runner into the stadium and across the ribbon wins.’

Modern tracking technology makes this new discipline easy to follow while plans to stream live footage off each of the boats, 24 hours a day, brings a whole new style of broadcast to the Games. Honey was instrumental in developing the award-winning LiveLine technology that provided such an innovative means of portraying the America’s Cup racing live during the last two Matches, and he knows this world well. He is clear on the appeal and advantages of having an ‘always on’ endurance sport.

‘One of the things that’s useful for the media is that having live internet-quality video from each of the boats all of the time means that people anywhere in the world can “drop in” and take a look at the different boats at any time, whatever the conditions or the time of day or night.

‘Even when teams are drifting it’s interesting, because we all know that the people who do really well at night are often the ones who gain a couple of miles that make all the difference the next day. So even when it’s light airs and seemingly boring, that can be when the races are won and lost.

‘Another idea could be to make it so that online viewers could just click on their favourite boat and there would be continuous video from that team, along with a rough-cut highlights reel of the most interesting footage over the last six or 12 hours. I think it would make compelling viewing.’

All of which sets out an exciting new vision for both sailing and the Olympic Games. But for many, of course, the elephant in the room is the issue of the expense and availability of boats. But here too views are evolving with a growing sense that an Olympic offshore campaign could yet end up less expensive than some dinghy programmes. And certainly less expensive than was originally thought.

Such confidence stems from the idea of holding qualifications in chartered boats that are already available regionally. An initial feasibility study revealed that there are over 25 classes that may be suitable and already available region by region. Typically boats would be around 6-10m LOA and might include the new Dehler 30, Bénéteau Figaro (both the Figaro 2 and newer Figaro 3), SunFast 3300, L30, JPK 1030 and other well-known shorthanded designs.

All they will want at Marseille in 2024 is a little bit of Mistral… If there is indeed breeze and if the live access to the boats is as good as hoped, then the introduction of a two-handed offshore sailing medal might yet do as much for sailing’s international image as Eric Tabarly did for the sport’s recognition in France when he took a whole nation afloat with him nearly 60 years ago.
Main picture: future Vendée Globe champion Armel Le Cléac’h training mid-ocean with co-skipper Fabien Delahaye for the 2010 Transat AG2R and (below) two-time Figaro Solitaire winner Nicolas Lunven practises for the same race in 2014 with his co-skipper Eric Peron. Lunven is racing the 2019 Transat Jacques Vabre on the 2009 VPLP/Verdier-designed Imoca PRB with Kevin Escoffier 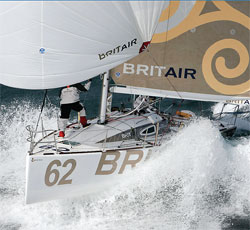 To pursue this, World Sailing’s council will select a list of different equipment it considers meet the key criteria by 31 December 2020. The recommended equipment list will ensure that event organisers, Member National Authorities (MNA) and the sailors have opportunities to train and compete in equipment that is geographically and financially accessible. It will also ensure that each MNA has a fair opportunity to prepare for qualification events and, eventually, Paris 2024.

‘This addresses a key area of concern. Normally when an Olympic discipline is being chosen every country is focused on the equipment and how it fits their way of training and how they will qualify their nation to the Games,’ says World Sailing president Kim Andersen.

‘Putting the equipment selection first is usually an effective way of killing a new concept – look at what happened in Women’s Match Racing. We have learnt the hard way that to make a discipline work it needs to be driven by the competition, not by the equipment.’

Another key ingredient would be in holding back the Olympic equipment selection itself until as late as possible, though no later than 31 December 2023...

‘A late equipment confirmation would mean that qualifying nations should have finalised their qualifications before the OIympic equipment is chosen,’ continued Andersen. ‘That way you’re keeping a level playing field for competitors who will focus their efforts on actually getting a medal at the Olympics rather than gaining an advantage through having spent a lot of money and time procuring boats for which there is no demand back home.

‘This month’s World Sailing conference will address a number of these points, especially around equipment which will provide an important stepping stone going forwards. Double-handed offshore sailing is on the increase worldwide and we firmly believe that offshore sailing as an Olympic discipline is a practical, engaging and exciting new prospect.’

So while 2024 may still be some time away, with key decisions yet to be made, there are some who have already started exploring the campaign possibilities. Among them former Nacra sailor and Volvo Race crew Hannah Diamond: ‘I have always wanted to go to the Games but after we were unsuccessful in the Nacra trials for Rio I thought my chances were all but over… which is why I switched to offshore racing and the Volvo,’ she said.

‘But now, with my experience in both offshore sailing and Olympic campaigns, this development has opened up the possibilities again. Racing with my fellow Volvo crew Henry Bomby we had a first taste with our double-handed Fastnet campaign on one of the new Jeanneau Sun Fast 3300s.’

Winning IRC 3A, along with being the first mixed double-handed crew and taking second place in the IRC double-handed division, was encouraging for their prospects. But their participation also provided a snapshot of how Olympic campaigns could run within mainstream racing, to the benefit of both.

Indeed, the 2020 Offshore World Championship will provide another example along the road to the 2024 Olympic event. In October 2020 Malta will host the inaugural edition during the Rolex Middle Sea Race in which mixed double-handed crews will compete on Andrej Justin-designed L30 keelboats. National teams will charter boats in a 20-strong fleet, with the boats drawn by the sailors one week ahead of the championship.

Offshore racing might not have started out as an obvious fit for the Olympic Regatta. However, the opportunity it brings for sailing to better distinguish itself in the wider arena could deliver an unexpectedly substantial step forward for both Olympic sailing and the sport as a whole.
Matt Sheahan