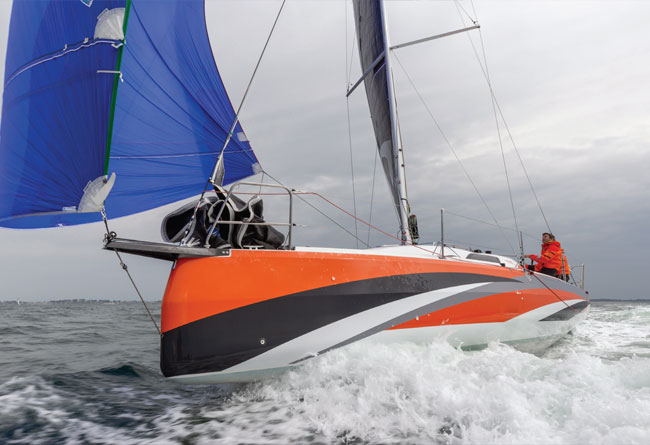 Jeanneau’s Sun Fast 3200 was one of the most popular and successful designs for today’s thriving shorthanded offshore racing market. Their latest 3300 promises to go one step further

Jeanneau Sun Fast 3300
Shorthanded sailing, be it single or double handed, has seen a steady rise in popularity in recent years. From the continued strong interest in the Mini-Transat to the thriving Class 40 fleet and Imoca 60 class, be it crossing the Atlantic or lapping the planet, there seems to be no shortage of takers among those looking to go it alone, or with just one other.

One of the most recent launches that is due later this season is Jeanneau’s Sun Fast 3300. This 33ft production racer takes over from the company’s highly successful Sun Fast 3200 of which more than 250 boats were produced since first hitting the market in 2007.

Following this sustained growth in shorthanded sailing and for the first time, the Olympics will include an offshore class where mixed gender double-handed teams will compete in 2024. There can surely be few better validations for this popular style of racing.

But it’s not all about the highprofile end of the sport. Indeed, some of the most impressive growth has been closer towards offshore racing’s grass roots. This year’s Rolex Fastnet Race will once again host a large fleet of double-handed entries.

Main picture: it had to be a rather remarkable boat to replace the much-loved and highly regarded Sun Fast 3200, and Jeanneau’s new 3300 is indeed a game changer. The lack of foils keeps the cost of the boat within sensible parameters but the most remarkable feature of this Verdier/Andrieu design is underwater: concave sections fore and aft of the keel help get her up on the plane rather than sucking her down as speed builds

The Jeanneau 3200’s fair lines, good manners and easy-to-handle deck layout made this not just a favourite of the shorthanded scene, but a design with a long list of victories that saw it become a benchmark for others. So, after 12 years on top and with the last 3200s being delivered this year, it was time for a new model, the Sun Fast 3300. But this is no straightforward like-forlike replacement, this is a boat that bucks the trend.

It was designed as a collaboration between two of the biggest names in yacht design, Guillaume Verdier and Daniel Andrieu. Verdier is well-known both for extreme designs such as the Ultime class tri Gitana 17 and for working with some of the most advanced projects in racing such as Emirates New Zealand’s America’s Cup winning cat from Bermuda in 2017. His ability to think outside the box has made him a very soughtafter designer.

So too is Andrieu. A veteran designer with a long list of successes to his name, Andrieu designed the highly successful Sun Fast 3200 and 3600 and it was important not only to retain his strong experience with Jeanneau, but his track record in mainstream racing and his eye for detail made him the perfect match for a project that was to deliver a boat that would work in IRC racing where optimisation would be key. At the same time the new boat had to be appealing to those looking to buy into a class. Performing such a balancing act is one of Andrieu’s great skills.

The goal was made tougher for both and indeed the builder, by the amount that has changed in design during the 3200’s reign, not least the rapid development of foils. Fin and bulb keels have also been a large part of racing yacht design over the last decade. Interestingly, neither of these features has been incorporated into the new 3300.

‘Going down the foiling route means that you need to be light. Being light means carbon, which would have increased the cost of the 3300, which in turn would have priced the boat out of our market’, says Jeanneau sailboat product director Antoine Chancelier.

‘There would have been disadvantages to the IRC handicap too so it was a very easy, but important decision to make at the start of the project.’

Instead, the 3300 starts with an innovative hull shape. On the face of it the most striking feature is its bluff bow that quickly opens out into fuller than normal sections as you look aft. This distributes the buoyancy more evenly along the hull’s length when heeled and as such distributes the pressure more evenly too. In addition, the wetted surface area is reduced when heeled, which reduces drag.

Looking further above the waterline, the topsides have tumblehome, which in conjunction with the reverse rake in the bow profile, help to reduce weight as well as reducing the centre of gravity.

But the biggest departure from the norm is in the shape of the underwater sections in profile. Both forward and abaft her keel the boat has a concaved profile.

‘A conventional convex profile produces lift as the water flows over it, just like any foil section. But because it is convex it pulls the section down,’ explains Chancelier. ‘If we are looking at stern sections it makes the boat sink by the stern as the speed builds which increases drag. A concave section does the opposite. So with a concave section aft we needed to include the same in the forward sections to balance the boat.’

To the casual eye, this fuller form might suggest a potentially slower boat than the Sun Fast 3300’s skinny-looking predecessor, yet the reality is quite different.

‘The 3300 is actually 40mm narrower than the 3200 and is a slippery boat in light airs, and particularly powerful in above eight knots of true wind speed,’ says Jeanneau distributor Nigel Colley, of Sea Ventures, himself a keen shorthanded and solo racer.

Another interesting feature is the rectangular-shaped keel, which is further aft. This means that the rig and sailplan are sited further back too, which in turn helps to improve the size of the foretriangle and with it the performance of the asymmetric spinnakers that are flown off the fixed bowsprit.

‘The fact that she doesn’t have a keel bulb helps under IRC, but it also reduces the wetted surface area which works towards better light airs performance. Off the wind, the lower drag is a significant benefit too,’ continues Colley.

When it comes to the rig, a square top mainsail and shorter hoist genoa provide an easier sailplan for shorthanded crews. It does mean the boat has a pair of running backstays which provide excellent support for the mast both upwind and down. With two sets of spreaders that are swept aft, the rig configuration provides a great deal of security, especially through manoeuvres.

While the design had clearly been thought through in great detail involving two of the world’s best designers, Jeanneau believed there was still important validation and development work to be done before the production lines are set in motion this Autumn.

This season, four development boats have been launched in order to assess the finer details.

French sailor Alex Ozon demonstrated the potency of this design in light weather by taking second place in the prototype’s first competitive regatta, the 50-strong IRC Doublehanded division at Spi Ouest. And just a few weeks later he had won a 170-mile offshore race out of La Rochelle by a large margin sailing singlehanded in much stronger conditions.

Others who will be campaigning the three additional prototypes this season are British sailors Henry Bomby and Hannah Diamond aboard a boat supplied by Sea Ventures that will be run in association with The Offshore Academy. Their season will include the Rolex Fastnet Race.

Bomby and Diamond had met while competing on the last Volvo Ocean Race when they were sailing Turn the Tide on Plastic and 11th Hour Racing. With the announcement of a mixed event at the Olympics both were keen to work towards that goal. The 3300 provided a perfect vehicle to gain valuable experience in competitive fleets while also feeding back to the Jeanneau technicians.

Below: an important part of this boat’s strong appeal for solo and shorthanded sailors is the easy handling sailplan which features a big square-top mainsail plus a short-hoist genoa. Note the reefable assymmetric kite, an interesting feature that reduces the overall cost of the boat’s sail wardrobe. With two sets of running backstays as well as the swept-back spreaders, this boat has a belt-andbraces rig configuration that inspires confidence and provides a great deal of security in manoeuvres. The photo above shows two other key features of this design: pronounced tumblehome and powerful chamfered shoulders 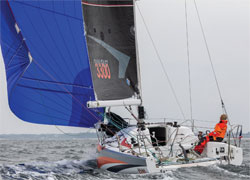 Diamond comes from the Olympic pathway having campaigned the Olympic Nacra 17 and is familiar with the realms of Olympic planning and preparation. ‘Teaming up with Henry was a natural fit as his solo experience combined with my Olympic programme experience alongside our time in the Volvo Ocean Race will be a good foundation to build upon,’ she says.

For Bomby, the support that is available from both the Offshore Academy and Sea Ventures is another key advantage in working towards their season’s goal while getting early knowledge of a boat that is a strong contender for the 2024 Olympics.

‘Being able to start our campaign now is a fantastic opportunity, but there are still many unknowns about the mixed offshore medal,’ he says. ‘What we do know is being skilled in the shorthanded discipline on 30ft boats will be crucial and so that’s where we’ll focus our energy initially. I'm also really looking forward to racing with Hannah, she’s got great complimentary skills and I think we can do well.’

All of which feeds back to Jeanneau, not just to improve and refine the boat for the competitive shorthanded scene, but in providing valuable development work in order to present the Sun Fast 3300 as a serious contender for the Paris Olympic Games.

With short handed sailing on the rise, the lure of a World Championships next year and Olympic medals at stake in 2024, the Sun Fast 3300 represents much more than simply another racing product launch.