It was there all along 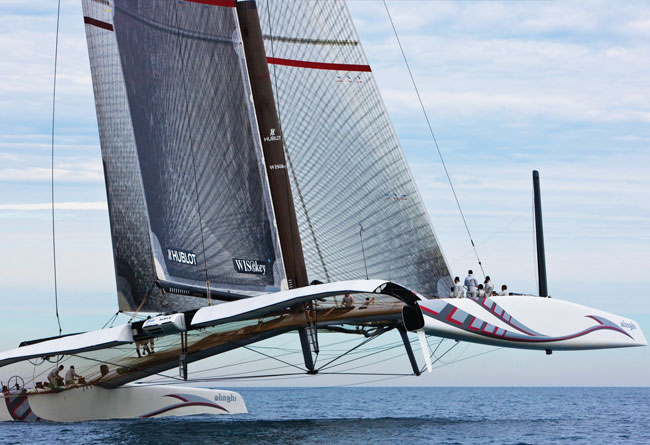 Reduce drag, eliminate flutter, strength in the right places, Carbo-Link have been taking advantage of the benefits of elliptical profiles in their carbon rigging for over 10 years...

There’s been a notable increase in the number of racing yachts and superyachts upgrading their rigging to Carbo-Link’s elliptical profiled solid carbon cables. Among them are the Wallycento Galateia, the offshore racer Rambler 88 and the brand-new superyacht Baltic 142 Canova together with Maxi 72s Cannonball, MOMO and Proteus.

Over the last 10 years, Carbo-Link has developed extensive knowledge and experience in the design, production and implementation of elliptical solid carbon rigging. Its own commercial R&D and practical experience since 2008; America’s Cup research together with Alinghi in 2010 and all AC teams in 2013; extensive CFD modelling and analysis in collaborative studies with one of the world’s top technical universities, ETH Zurich; and a growing number of superyacht projects, all contribute to Carbo- Link’s elliptical rigging solutions.

Based on this experience, Carbo- Link has learnt that a conservative ellipse ratio allows for superior all round performance. The optimum profile for rigging cables is a compromise – it’s a balancing act governed by a complex interplay of positive and negative factors which can be broken down to three main variables; (1) robustness and reliability, (2) reduced flutter and (3) a balance of upwind, reaching and downwind wind angles.

Structurally, the elliptical rigging is exactly the same as Carbo-Link’s round-section cables and identically tough, with 100 per cent consolidation, fully integrated end fittings and a specially toughened resin matrix that gives the rigging remarkably high resistance to chafe and impact. ‘At the time of writing, Carbo-Link is the only GL-certified elliptical rigging supplier on the market,’ says Carbo-Link’s James Wilkinson. Produced in strict accordance with certified safety factors, their robust reliability over many years has been proven beyond doubt with consistent, known behavior and characteristics in all weather conditions, in a wide range of cruising, high-performance inshore racing and ocean racing applications. In addition, the structural characteristics, Carbo- Link’s elliptical rigging features a rounded leading edge which reduces the likelihood of point loading chafe and damage to sails. 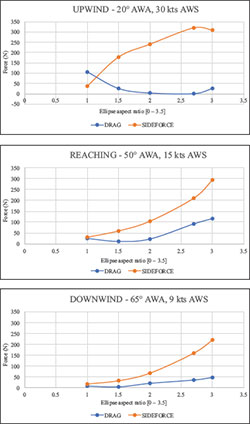 Above: these three graphs show how drag and side force act on a grand prix monohull’s rigging, with sectional profiles from 1:1 (round) to 3:1 (elongated ellipse). These diminishing returns, along with the very undesirable fluttering of elongated elliptical rigging, show there’s a clear benefit in choosing a conservative ellipse profile.
Below: solid carbon rigging with a conservative aspect ratio will still have a reduced frontal area in comparison to bundled rigging with an elongated ellipse

Fluttering is lift induced torsional vibration. An elongated section creates lift with angle of attack, this in turn creates deformation as result of a cable being soft in the torsional direction. Rigging cables will then start to twist to the extent that flow separates, the cable becomes like a loaded spring, resulting in vibration.

A conservative ellipse aspect ratio allows for increased aerodynamic stability and improved flow attachment at broader wind angles. This reduces the likelihood of fluttering and the associated vibration, together with increased cable stiffness in the torsional direction of Carbo-Link’s solid rigging. In several years of hard, highly competitive racing both MOMO and Cannonball have not experienced vibration under sail.

In more general terms, elliptical rigging has an advantage over roundsection cables in terms of vibration as a result of a significant reduction in vortex shedding.

Overall performance is not all about the drag. It is also vital to consider side force, and the balance between reducing drag in correlation with the smallest possible increase in side force. Every yacht can make gains in moving from a round (1:1) cable section to an elliptical profile. For a grand-prix monohull, Carbo- Link research shown in the graphs illustrate drag and side force at a range of defined ellipse ratios when sailing upwind, reaching and downwind in 12 knots of true wind speed. As shown in the graphs, the largest gains to be made are between round (1:1) and an ellipse ratio of 1.5:1. Beyond 1.5:1 ratio, the gains become progressively smaller and smaller. Moving to the right-hand side of the graph, where the aspect ratio is longer, the more the side force increases which has a negative impact on the yacht’s performance.

‘You cannot coil larger solid rigging’: It is not necessary
You don’t coil up your mast and send it away for a service. Why do that with your rigging? Carbo-Link’s rigging does not require extensive servicing off-site, all evaluation and service can be done at the yacht’s location. Servicing consists primarily of visual inspection, combined with non-destructive testing on any necessary areas. The rigging does not require any load testing and has no cover to maintain or replace.

Carbo-Link rigging is transported with some sections not cured and therefore able to be coiled. The uncured sections are then completed on site. The cost is included in the package, you buy a finished product ready for dressing. The curing time is included in the delivery timeframe.

‘Solid rigging is prone to impact damage’: It is proven to be tough and superior to other forms of carbon rigging
Carbo-Link rigging has proven impact and chafe resistance against tylaskas, t-rings, gennaker sheets, jib sheets and spinnaker poles aboard various yachts from the J Class to TP52s to 60m+ superyachts. Bobstays can be damaged when they hit a substantial object, whatever they’re made of. With solid carbon you can see the damage and repair it in situ – unlike PBO or bundled carbon rods, which may look fine and then fail unexpectedly without the possibility of repair.

‘Carbo-Link rigging cannot interface with masts’: Of course Carbo-Link rigging can interface with all masts
Carbo-Link’s custom terminations are capable of interfacing with any mast manufacturer’s spars, whether internal or external tangs, toggles or strops, spreader tips to chain plate fittings. Whether a new build or refit, Carbo-Link project managers and engineers collaborate with the project engineers involved to create optimum solutions.

This has led Carbo-Link into a range of conservative ellipse ratios from 1.4:1 to 2.0:1. Carbo-Link determine the optimum ellipse ratio for a yacht, primarily as a function of the boat’s speed, but also the type of racing – whether it’s upwind/ downwind, coastal or offshore.

Based on Carbo-Link’s research over the last 10 years, combined with proven on the water experience on IMOCA 60s, America’s Cup catamarans, high-performance monohulls and superyachts, it is clear the conservative ellipse aspect ratio balances all aspects to provide superior performance. GL certification, combined with the same structural production processes as Carbo-Link’s reliable round rigging, make Carbo-Link’s elliptical rigging solutions a great performance option from inshore race boats to superyachts.