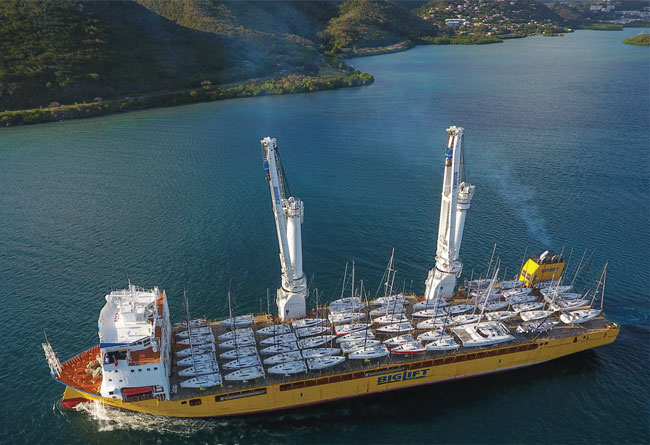 Very rarely... given the capacity of Sevenstar’s fleet to ship even the very largest yachts to the world's premier regattas

The allure of bucket list races and regattas around the world and the strong interest in participation has prompted a revolution in yacht transport. ‘It’s quite amazing how we have been able to modernise what has been a traditional industrial sector to adapt to the unique demands for safe and effective transport of fragile items like racing yachts,’ says Wouter Verbraak, head of racing logistics at Sevenstar.

Decades ago most boats were delivered from one region to another, with the length and difficulty of the voyage often constraining the choices of which races were within reach. Deliveries were often epic adventures for the delivery crews, but they could also be very time-consuming and often prone to delays and damage.

Those that did choose to travel by ship often had difficulties: poor handling of the boat and spars often caused damage, while inefficient paperwork handling and bureaucracy would also cause delays.

Now, however, efficiencies within the top segment of the shipping industry have not only helped global commerce, but yacht transport as well. Specialists are now able to streamline the process. The steps involved are clear and the handling of the details are fast and professional, an important feature particularly to first-time users of yacht transport.

‘The process has become so efficient we are now able to book trips with shorter and shorter lead times so that teams may participate in more and more races of their choice,’ Verbraak explains. ‘This helps not only the teams, but the events too. This is why we actively engage in building close, long-term cooperative partnerships with prominent events, such as the Caribbean 600 and the Transpac so that all competitors can benefit from this service.’

Main picture: some of Sevenstarʼs ships are bi-modal, transporting regularly scheduled shipments of bulk goods between ports, with additional capacity available on deck for mast-up transport of racing and cruising yachts from one regatta to the next. This has reduced the cost of transport for goods merchants and yacht owners alike in a win-win scenario for all involved. The increased availability of transport options has fostered a trend of more yachts being shipped (rather than sailed) across oceans to compete in regattas on the other side of the world

Rather than a top-down approach to managing the operation, Sevenstar takes a modern agile approach, where for each project a small dedicated team from their internal network of experts is put together to provide the clients with a complete and tailored service. In this way, they are adaptable to the client’s preferences and work together with the team’s own resources for the handling process up to loading and offloading.

‘Our team is both large and small,’ says Verbraak. ‘There are just two of us dealing with racing yachts, which makes it easy for our clients to get to know us and for us to understand their unique needs. Yet there are 90 people in our Sevenstar offices around the world and 2,000 among our partners in the Spliethoff shipping group. This group has 120 vessels that operate around the world, so we have excellent reach to go nearly everywhere on the planet.’

Among this large fleet, there are a variety of platform solutions available, allowing Sevenstar to operate in an active large port like Rotterdam, a medium-sized port like Palma, or a small tropical destination like Tahiti. Often their ships are bi-modal, where an existing large load of bulk materials is on a regular schedule from one port to another, and there is still capacity to accommodate yachts as rig-up deck cargo to be picked up and offloaded along the route or routed to another destination once the main load is delivered. When planned properly, these shared load trips can be huge cost savings for the yacht owners and represent a win-win scenario for all concerned.

A typical example of Sevenstar’s transport timeline is its arrangement with the RORC Caribbean 600. For this trip a minimum of six boats were needed to commit by July 2018 to leave after the New Year from Palma, to arrive in Antigua within a few weeks before the start of the race.

Similarly, Sevenstar is working out the mast-up transport of several entries from Australia at the end of their Austral summer to arrive in Los Angeles for the mid-July start of the 50th anniversary Transpac and then shipping them from Honolulu back to the US, along with others from the 100 entries in this race, or back to Australia as desired.

Superyachts are also a prime source of business for Sevenstar and Verbraak says the eight to 12 slots for vessels over 30m in length are filling fast on a submersible ship headed to Auckland in 2020 for the America’s Cup events in 2021. For these programmes it’s not only the yachts that are moved, but often their containers and spares as well.

In the last cycle, the America’s Cup catamarans and the team bases were moved by Sevenstar (mostly in containers). Now Sevenstar is already working with teams to provide direct custom shipments for the much bigger AC75 yachts and the bases to the different World Series events in 2020 as well as the Cup in Auckland.

‘It’s important to be part of the racing community to fully understand their logistical needs,’ says Verbraak. As a world-class navigator, with his last big win in the Sydney-Hobart aboard Phil Turner and Duncan Hines’s Reichel/Pugh 66 Alive, which is headed to the Transpac, he knows this well.