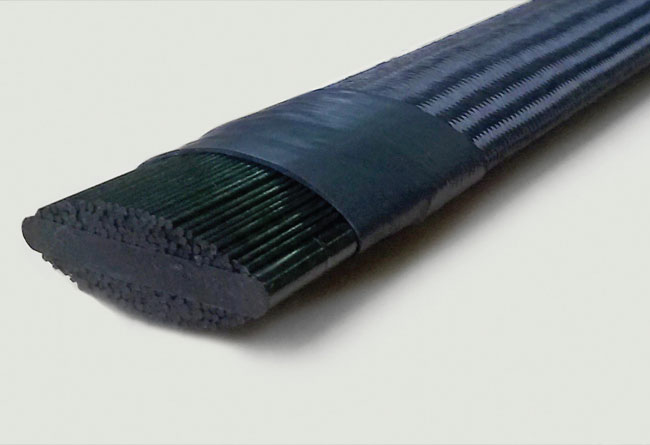 When carbon fibre standing rigging became a viable option for raceboat spar packages, most of us got very excited. This was the last frontier to pursue in raceboat technology where steel could finally be eliminated and huge gains in performance could be realised quickly from the many kilos of weight saved aloft in the spar system. Stability would go up, pitch gyradius down, and the boats equipped with this new technology would be measurably faster as a result. Enter Future Fibres.

While most of the features of this new technology were positive, there were a few downsides. These included the complicated details of attachment to the boat and spar, replacement options when a new section may be needed, transport logistics from the fabrication facility to the commissioning site, potential damage from impacts to the rigging, and the larger diameter of carbon rigging that creates additional windage in the spar system compared with steel rod rigging.

Future Fibres addressed some of these issues in its ECsix product, which consists of small carbon strands bound together in a unidirectional bundle that gives both flexibility for easy transport when coiled and multidirectional strength since the loads are distributed among the strands. In addition, this design can more readily absorb impact energy by deflecting when hit compared with a solid carbon rod. ECsix can lose 25 per cent of its carbon strands but still keep the spar upright and to date it has had zero failures.

Main picture: the new AeroSix rigging from Future Fibres: aerodynamic, elliptically shaped rigging made of bundled carbon rods in a chafe resistant sheath. The result is claimed to be the best of both worlds: a flexible rigging cable that can be coiled for transport and doesn’t suffer from excess vibration, with lower drag than regular ECSix cables. AeroSix has been trialled in recent months aboard early adopters such as the Reichel/Pugh Wallycento Magic Carpet3

Yet solid carbon rigging such as Future Fibres’ Razr product does have its own advantages: the amount of load-bearing carbon is in the smallest possible area when in a solid cross section; it has lower windage than multi-strand rigging and often minimal weight as well. The downside of solid carbon is that it’s very difficult, if not impossible, to coil, making transport logistics a significant challenge, particularly for very large rig plans. It is also much more likely to break in compression due to its monolithic structure, as well as being infamous for the noise it makes due to vibration.

Given these issues, it’s useful to study the pros and cons in a less intuitive, more numerical manner.

For weight, that’s relatively simple: the weights of the parts are added and positions in the rig plan mapped, and the weight and centre of gravity can be calculated for the package. Alternatively, the spar and rigging can be weighed and balanced to determine these figures as part of an IMS-defined measurement necessary for ORCi or ORCsy certificate data.

However, for windage estimations, more research is needed. This topic had first been explored a few decades ago with wind tunnel tests on shaped steel and titanium rigging, demonstrating the windage advantages of an aerofoil-shaped rod, compared with circular shapes, in the 12 Metres raced in the America’s Cup. But the cost and complication of fabricating these sections kept it from widespread use.

Scroll forward to October 2018 at the Yacht Racing Forum in Lorient, France, where Future Fibres’ Jonathan Duval, head of research and development, presented research on the topic of windage in composite rigging and its ancillary effects. His findings were interesting and revealed another issue among composite rigging types: vibration and its effects.

On windage drag, a study was performed at the University of Auckland’s Twisted Flow Wind Tunnel that examined three shape options with with the same cross-sectional area (CSA) of 314 mm2: round (aspect ratio 1:1), elliptical (2:1 ratio) and an extended ellipse (2.7:1 ratio). Using the same material for each, at the same air density and velocity (about 22kts) the drag was measured in orthogonal X and Y reference axes at 10° intervals from 0-90° wind angle.

Above and below: the results of wind tunnel research at the University of Auckland and VPP modeling by Future Fibres and North Design confirm the aero benefit of elliptically profiled rigging over round-section rod. For a typical-length day race at a superyacht regatta, this translates to a theoretical 19 second advantage. For a two-day offshore race, the difference could amount to as much as 12 minutes.

The results were interesting: as expected, the round shape had its highest Fx drag measured at 0°, ending at zero Fx drag at 90°. The ellipse shapes were very low at 0-20°, then rose to about half that of the round shape for the ellipse and about a third for the extended ellipse.

Along the Y axis, the Fys measured were zero at 0°, then rose rapidly for the extended ellipse before falling at 10° to less than the round and ellipse shapes until at 30° rising above the round shape until being about 30 per cent more at 90°.

Combining these results suggested lower drag overall for the elliptical and even less for the extended elliptical shapes.

With help from North Design Services, Future Fibres then put these numerical results into a VPP study that varied the windage drag coefficients from the wind tunnel study on rigging shapes. This study found for a generic 100ft superyacht sloop with a four-spreader spar that the gains in VMG upwind speed for the elliptical shape were between 1.25 – 1.6 sec/mile and 1.9 – 2.5 sec/mile for the extended elliptical shape compared with the round shape over 8-20kts of wind, and reaching at an apparent wind angle of 75° the ellipses were less than 0.5 sec/mi slower compared to the round shape in the same wind range.

Future Fibres then used this information and applied it to a typical superyacht regatta such as the St Barths’ Bucket, where a typical upwind leg is 15.9 miles, the downwind leg 13.3 miles, and in the wind range of about 14kts where there is the least advantage predicted from shaped rigging. They found in this scenario the effect of shaped rigging to have an advantage of 19 seconds in the race for the elliptical shape and 30 seconds for the extended elliptical shape.

Applying the same assumptions to a model racecourse the length and geometry of the Caribbean 600, these advantages may amplify even more: up to 12 minutes for a race taking more than two days. And while we all know there are many variables inherent to yacht races, think about the value of a 30-second advantage in a highly competitive superyacht day race, or 12 minutes in the Caribbean 600.

Another effect studied was the effect of a vibrating rod on drag, where earlier studies had found that for an amplitude of 25 per cent of the diameter the drag increases by 50 per cent, and at 50 per cent amplitude this increases to 100 per cent drag increase compared with a stationary rod. Anyone who has been onboard a boat with solid rigging knows about this effect, it can be felt and/or heard, and while it may be tolerable during a race, in a superyacht at mooring with the owner and guests aboard, this can be annoying at best.

This vibration effect does not seem to be as bad or noticeable with bundled rigging like ECSix, perhaps because the energy dissipates more readily among the strands.

While the effect of vibration drag has not been directly measured yet as in the shape-drag study, Future Fibres has nonetheless found a clever new hybrid solution that addresses all these effects in onedesign: AEROsix. This new product combines a rectangular solid IM carbon RAZR plate in its interior cross-section, surrounded by strands of carbon similar to those in ECsix that are bundled into an extended elliptical shape. In cross-section, up to 40 per cent of the carbon in the structure is in the carbon plate, while the remaining percentage is in the carbon strands.

Future Fibres’ strong composite knowledge and high technology processes allows these rods and the plate to be perfectly aligned and working together as one single element, bringing the highest possible stiffness and strength that current technology allows.

This clever design then offers the impact resistance of the strand bundles of ECsix, its lack of vibrational nuisance and windage drag, and its flexibility for coiling and transport, yet also having the inherent strength and rigidity of a solid rod, all formed into the low-drag configuration of the extended elliptical shape profile. In a highperformance programme, this may be the best solution yet to minimise all elements of drag, both from shape and vibration risk. 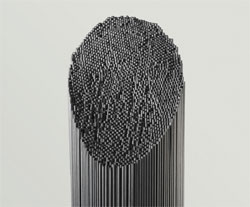 Above and below: bundled carbon fibre rigging has a larger cross sectional area than solid carbon rigging with the same tensile strength 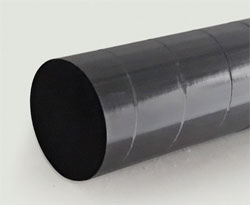 Even with its non-circular shape AEROsix can be attached into existing ECsix fittings with the use of an elliptical adapter, so retrofits and repairs are no problem.

Danny Gallichan, captain of the Reichel/Pugh Wallycento Magic Carpet3, was an early adopter of AEROsix and has said, ‘we’ve had the rigging for three to four months now and sat through quite a lot of different winds, and I have not seen any of the vibration that was originally a concern for us.’

AEROsix brings us squarely into the next generation of composite rigging, with increased safety, light weight, low drag, easy installation and minimal vibration.