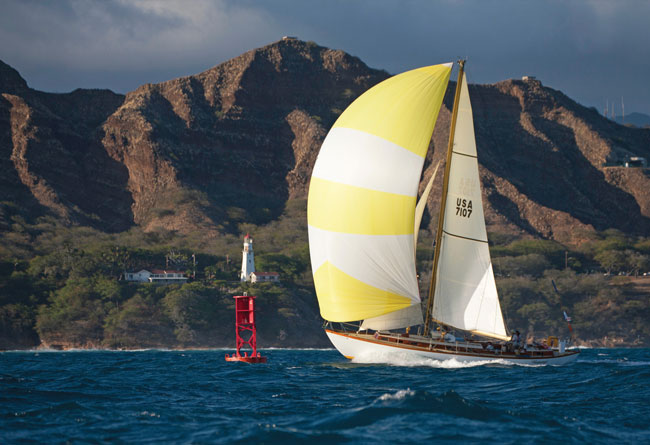 But the Mai Tai’s will be as chill as ever…

In July 2019, a large fleet of yachts will start Transpac 50, the 50th edition of the classic Los Angeles- Honolulu ocean race. Already there are nearly 50 entries, the strongest turnout in the event’s 113-year history.

‘We knew the 50th would be popular and we are preparing many special features,’ said Transpacific Yacht Club commodore Tom Hogan, ‘but we had no idea the interest would be so strong, so fast. Not only are there many return entries who still find this race attractive, but also newcomers who want to test themselves and their crews on a 2,225-mile race to paradise.’

Besides the iconic Barn Door firstto- finish trophy now being open to all monohulls under 30 metres in length, other new features include a new Corinthian Trophy awarded to the topfinishing all-amateur team. As with most ocean racing, amateur sailors form the backbone of the fleet and Transpac wants to recognise the efforts they make, given that many months, or even years, of intense planning and preparation are necessary to be competitive.

Among those who may qualify for this trophy, and also a newcomer to the Transpac, is Heather Furey of Coronado, California, who is entered along with her husband Chuck with their Santa Cruz 52, Blond Fury.

‘We acted quickly. I think we were number four on the entry list,’ said Heather. ‘There has been so much talk about this race and I wanted to make sure it did not sell out!’

This is Heather’s first Transpac but Chuck is a veteran of several past races, mainly in the ‘80s and ‘90s during the competitive heyday of the ULDB Sleds. Heather said she’s wanted to do the race for a long time, and now finally has the time to pursue her dream. The Fureys explored the option of chartering a boat, but in the end bought Rick von Heydenreich’s Paranoia, a Santa Cruz 52 that finished mid-fleet among nine entries in the Fabulous Fifties class in the 2015 race. It’s a boat that fulfills their interests in both speed and comfort. ‘Chuck is interested in comfort and I like to go fast,’ Heather admits.

Main picture: Amateur entries make up the backbone of the Transpac fleet, which ranges from modern race machines to classic ocean cruisers and includes almost every other sort of boat in between.
Below: The main prize for monohulls is the historic King Kalakaua Trophy, named after the Hawaiian monarch who first proposed the race back in 1886... 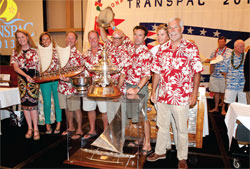 Like many others in Transpac 50, these two are building their crew around friends and family. They plan to have a crew of 10, many of them pals from Coronado YC, with a core experienced group of five encouraged to bring along a spouse or an adult child. This core group, including Chuck, used to race together on Kathmandu, Fred Kirschner’s Santa Cruz 70. The Buddha’s eyes graphic on Kathmandu was an iconic symbol of the Sled era. ‘We all knew Fred well, so we may adopt this symbol for our team too,’ Heather says.

Blond Fury and all other monohulls in the fleet will be eligible for the King Kalakaua Trophy, a beautiful silver and koa wood award named after the Hawaiian monarch who, in 1886, first proposed this race to build fellowship between his islands and the US mainland. The Transpacific YC has dozens of trophies in an impressive collection dating to the first race in 1906. The names engraved on those trophies represent a who’s who of ocean racing history.

While rumours circulate about who among these legends will return to the race next year, one of them is already confirmed on the entry list: the Sparkman & Stephens-designed 73ft yawl Kialoa II, built and raced by Los Angeles-based developer and avid ocean racer Jim Kilroy as a sloop in 1963. She raced in the 1967 Transpac and after being converted to a yawl in 1968, she raced the Transpac again in 1971. Kialoa II is now owned by Sydney-based Aussie Patrick Broughton, who sailed her last December in the 2017 Sydney- Hobart Race and is one of many entries who, over the decades, have come up from Down Under to compete in the Transpac.

‘My brother Keith and I were looking for a classic ocean racer of some provenance,’ said Broughton. ‘We had no idea we would end up with a boat of such heritage as K II. We got a good deal with the previous owner, who was supportive of our efforts to race her in original trim rather than make radical alterations.’

And original it is: the original spars are still up, held in place by wire rather than rod rigging, while a rebuilt sheave box on the masthead will better accommodate the original three-halyard setup. Modern lowstretch sails, however, put a limit on how far to modernise, with the polyester mainsheet being an example of where the system loads will give a little rather than break.

Broughton says his crew have raced with each other on and off for decades, with over 200 Hobart races between them but only one Transpac. ‘We don’t have any sailmakers or America’s Cup trimmers, but still our objective is to be competitive and to have fun. Our programme with this boat will be to do the anniversary editions of the classic ocean races: the 75th Hobart, the 50th Transpac and the 50th Fastnet, in addition to the Newport-Bermuda. This boat has done these before with Jim, and we’re carrying on the tradition.’

Whether it’s a sloop, yawl or schooner, a monohull or multihull, a flat-out ocean racer, a comfortable cruiser or something in between, the Transpacific YC welcomes entries from around the world to join in the 50th edition of this classic ocean race. Aloha!