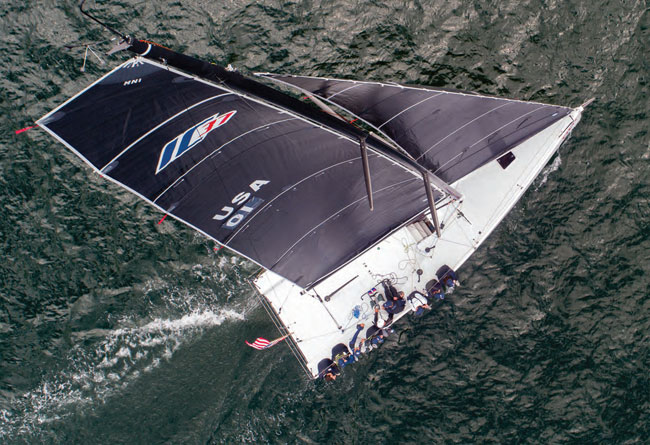 Competitive big-boat one-design racing is clicking up a notch at New York Yacht Club (NYYC) and soon elsewhere around the world with the new Mills-designed IC37. This affordable, strict one-design speedster will be making its competitive debut in the 2019 season, and the order books at Melges are already filling up fast.

It’s been 20 years since the last big wave of offshore-sized onedesigns hit the marketplace and helped foster a revolution in big-boat racing. The excitement and enthusiasm of these designs and their class-managed racing brought thousands of sailors around the world into competitive sailing at a level hitherto enjoyed only by a handful of Grand Prix enthusiasts. Since then, most other new onedesigns have focused on high performance at an athletic level that is out of reach for many otherwise competitive pro-am sailors. Perhaps just as important to NYYC’s vision of the sport, as reflected in the IC37 design itself, will be the emphasis placed on class rules to give incentives to a diverse array of Corinthian sailors. Women, juniors and other emerging sailing talent will all be encouraged to join in the fun so that the next generation will be given the opportunity to continue to enjoy this great game.

When the NYYC initiated the search for a new keelboat design that could be raced competitively in a fleet of 20 boats for its second decade of racing in its premier Corinthian event, the biennial Rolex New York Yacht Club Invitational Cup, a veritable dream team of marine industry talent was assembled to fulfill the NYYC’s mandate.

Mark Mills and his team at Mills Design were chosen due to their success in everything from the highspeed, yet affordable C&C 30 onedesign to custom designs for various high-tech superyachts, demonstrating their ability to be abreast of the latest technology in addition to being well-versed in working with builders to help create efficient and cost-conscious production designs.

Westerly Marine’s meticulous craftsmanship in creating fast race boats is world-renowned, and, with help from SDK Structures, they were chosen to put this expertise to use in crafting production one-design yachts with custom-quality features. Other suppliers – Southern Spars, North Sails, Garmin and Harken – were also selected for their ability to deliver reliable, high-quality products to the discerning performance sailor.

Main picture: An out-and-out racer, the new Melges IC37 is designed to get up on the plane in as little as 15 knots of true wind. The design brief for the IC37 had absolutely no truck with cruising, but comfort on deck when racing was still a key consideration – ensuring all the crew have room to work efficiently

To tie all of these elements together into an effective one-design class with strict rules that work well for both competitors and race organisers, Melges Performance Sailboats was chosen to help not only in these tasks, but to bring the boat and its design concept to the broader market. With decades of successful international one-design class experience as both a builder and class manager, Melges is uniquely positioned to help manage the new class’s anticipated high growth rate worldwide.

This strong demand in the broader market has led to the nomination of a second, equally quality-conscious builder, Fibre Mechanics, based at Lymington in southern England.

A boat length of 37ft was chosen as the right balance point, being small enough to not require a large crew nor have a large footprint in logistics, but still large enough to provide solid and competitive bigboat racing both inshore and in limited coastal/offshore racing as well. At this size, the systems on board can remain simple and therefore easy to manage and maintain. The 37ft hull length also helps keep the new IC37 by Melges within tight budget parameters.

There is no cruiser/racer duality in the design brief. Given the racingonly use intended for this boat, the NYYC specified three important characteristics to be included in the design: rudder authority for manoeuvrability in close quarters; longitudinal stability for confident control while planing in close quarters; and a high-lift keel with adequate surface area for quick acceleration out of tacks, plus the ability to hold a lane upwind off the starting line in a large fleet.

The IC37 is fast racing yacht, yet it is not a sportboat, and has inherent stability from a low-VCG carbon keel fin with a large bulb, and a powerful hull form that maximises crew-induced stability without resorting to extreme droop hiking to produce this performance. The forward sections in the hull form are full enough to allow for easily-initiated planing speeds in as little as 15 knots of true wind, while remaining under full control and discouraging the bow from submarining.

The net result is a stable, seaworthy platform that is easier to sail at higher-than-average speeds and through a more diverse range of conditions than conventional sportboats can manage.

Another dream team member, Barry Carroll, brought to the IC37 decades of experience in efficient production and build techniques, class marketing and project management, as well as years of experience in working with Mills Design. Carroll knows the New York Yacht Club and its culture well, and he helped the club in the selection of the last NYYC-inspired design, the ClubSwan 42.

‘We needed a fast and relevant modern boat,’ says Carroll, ‘but also one that would be easy to race, maintain and fix for an active and competitive club membership.’

This is an important and somewhat unique aspect of the Melges IC37 Class. The first 20 boats are owned by the club and managed by its staff for chartered use by club members, who are typically experienced big-boat owners, but want to have a turn-key easy experience when going racing on the IC37. Because the intent is to adhere to strict one-design rules that will limit their ability to customise, the IC37 team had to put great effort into thinking through all the systems for their efficiency of use, with no further customisation needed.

The layout was therefore designed and engineered with substantial input from several top sailors such as Ken Read of North Sails, who was directly involved in optimising all aspects of the rig, sails and deck layout for efficiency and simplicity.

The goal was to construct an effective platform for a crew of eight skilled amateurs to perform any and all manoeuvres, with every crewmember having a job and ample space to perform that job efficiently. To save on construction costs and keep the interior watertight, all control lines are kept on deck, and the choice of deck hardware and its location has been carefully decided to maximise efficiency in function regardless of cost. T

A 37ft hull length was identified as the right balance point, being small enough to sail without a large crew and relatively cost-effective to transport, yet large enough to deliver proper big boat racing. All rigs are supplied by Southern Spars and all sails by North. The first 20 hulls out of the moulds will be owned and managed by the New York Yacht Club and made available for its members to charter. A key aim of the NYYC’s design brief was to create a fast and modern boat that offers a genuine ‘turn-key’ racing experience 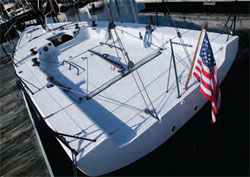 he structural elements of this boat were devised by SDK Structures, who are renowned for their skills as composite engineers in the world of custom boats. Their attention to detail has contributed to robust and durable structures for safety, economical maintenance and long life. Nothing is included in the structures that does not contribute to structural integrity, sea-keeping, boat handling or durability.

The materials and processes used in construction therefore represent the best blend of strength versus value, including the use of unidirectional and biaxial E-glass fabrics, Corecell foam with highdensity core block at all hardware and fittings, integrally moulded backing plates for all fittings and carbon fibre used where appropriate throughout the structure, such as in frame capping, in the keel fin, the rudder, and the mast. The WEST epoxies in the laminates are vacuumconsolidated, with components postcured in an oven.

The clever structural simplicity inherent in the design from SDK has also led to cost-effective construction and lighter weight, making uniformity and compliance to strict one-design standards easier to achieve. The goal is to have each boat in onedesign trim be interchangeable with all of the others. No more speculation on who has or does not have “the faster boat.”

Even the sailplan had to be thought through carefully, with a class rulemandated single option mainsail, soft-hanked headsail and asymmetric spinnaker constructed by North Sails. The upwind sails are built using North’s 3Di design technology to find a suitable balance in not just size, but in having mould shapes that are adaptable and functional through the full range of varied wind strengths using just simple on-deck controls of backstay, fairleads, inhauler and cunningham for the jib, and outhaul and cunningham for the main. Below decks is a mast jack with shims for fast adjustment of rig tension.

And since North Sails works closely with Southern Spars in their respective design spaces – both companies being parts of the same umbrella organisation – the characteristics of the carbon fibre spar are anticipated in the sail designs, and vice versa. This means that no re-cuts for tweaking luff curves should be necessary. Politically, this arrangement of one sailmaker for the class also ends the “sail design wars” that pit rival sailmakers against each other, with the yacht owners bearing the brunt of the costs.

Moreover, with one supplier of mast and sails, the advent and refinement of an authoritative class tuning guide should be fast and easy to digest.