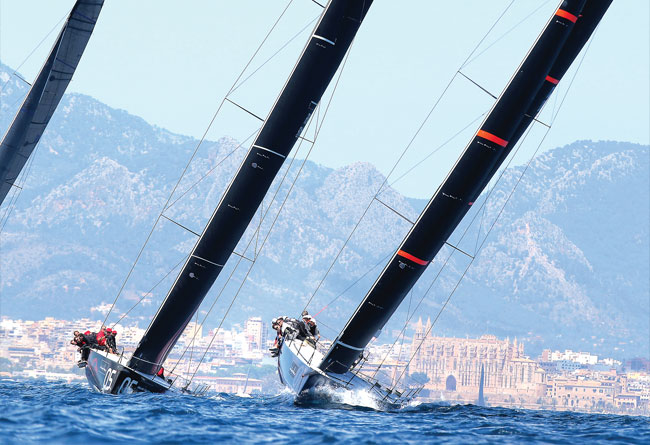 Close and intriguing start to the TP52 year. Less tight for the Fast40s… ROB WEILAND

In Palma Ado Stead replaced Ben Ainslie, probably just for the event, and the Gladiator team clearly needed time to find a new balance and motivation after Sir Ben’s sudden switch to a new Cup sponsor who stipulated that a shared TP52 programme was not part of the plan. Speaking to Tony Langley, he said he could understand, given the bigger picture of the money needed to have a fair stab at winning the old mug, but nevertheless what has taken place clearly did not match how he planned his sailing for the coming year…

With six of the seven new boats racing in Palma designed by Botín Partners, there was no surprise to see these potentially appear very even in performance… but gosh are they different in detailing both on deck as well as down below.

So many ideas how the perfect TP52 shall be equipped and operated – yet almost every one of them functioned in battle from the word go with very few hiccups. Truly remarkable and a feast for the eye. I hope one of these days a photographer gets the chance to show the reader the interior of these boats; systems everywhere, like a Panamarenko artwork but in this case it all has function… and it works. A picture says more than a thousand words but I understand why the teams are not so keen on publicity right now.

Talking to a ClubSwan50 owner about the difference between the two classes and how he chose between them, for him a major factor was that the TP52 costs twice the money – just stand behind both boats for five minutes each and you will know. Imagine then going inside both and the difference is even bigger. Horses for courses, I happily sail on both.

How these Formula 1 boats and teams are made ready for battle is where you see differences too and in the end it is the crew and the teamwork that count most. Not unexpectedly Team Azzurra came out of the box flying, Vasco [Vascotto] or no Vasco, taking their first regatta win by a good margin. Santi Lange, no one will dispute, is a very different character from the ‘Trieste volcano’, also in his racing, but from race one Azzurra set the benchmark high.

Clearly Quantum Racing came to Palma with no time to spare for training after launching their boat just days before the event but they battled through the week remarkably well, from a modest start to silver on the podium… while their shore team were burning quite a few litres of midnight oil.

Harm Müller Spreer’s Platoon, the only new Vrolijk boat in the regatta, took third but their owner and crew clearly are of the opinion their new boat is capable of more than this and shows more potential relative to the Botín boats than the previous Platoon. No way the 2017 Platoon was slow, just hard to find the right gears sometimes, certainly in the light stuff – so expect to see Platoon on stage regularly.

Pretty impressive it was to see Hasso Plattner doing as well as he did (fifth) with his new Phoenix (2018). Not that his crew list is short of proven talent but it takes more than talent to be a team. In the end Phoenix did not make it on stage but this was certainly not a disappointing week if not a confidence boost.

Main picture: just how close you can sheet a TP52 headsail with the shape-holding and arrow-straight exits possible with today’s sailmaking techniques remains to be seen but reigning Super Series champions Azzurra (nearest camera) must be getting there; Azzurra’s boom is also well above centre. When the Rán team’s first Maxi72 was launched in 2009 builders Green Marine famously sampled through numerous rolls of pre-preg using only the very best. Similar attention to detail went into Jason Carrington’s immaculate build of the team’s first Fast40+ (below). Beamier than a TP52 and with clever sheer treatment placing the hiked crew further out than normal the extra righting moment showed as soon as Rán VII hit the water. Meanwhile, the VCG benefits from the reduced deck area plus there are more gains from a light electric engine installation with shallow power cells set flush inside the very bottom of the hull 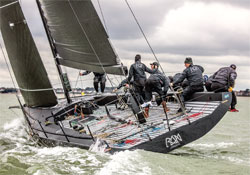 Sled prefers to be invisible in her all-white attire and mostly they are in this abundantly coloured fleet but finishing fourth will have given them the confidence they needed to trust their new weapon.

Finishing sixth to 10th in this fleet is no shame but for sure some catching up to do for Alegre, Gladiator, Paprec and Onda. Each had their moments but consistency is as yet lacking. Onda, stunning livery and some of the great names of our sport onboard, not least Robert Scheidt, a legend. But so much to learn for this new team and so little time. They will catch up, however, and I for one am looking forward to their first race win. That will be a party!!

Always a joy to see Paprec in the mix. France is filled with sailing talent and Paprec is all about giving the younger French talent the opportunity to mix with the pros. And mix they do and they do enjoy it, the team with the most smiles.

Not smiling yet is the class manager. As in 2015, so many new boats arriving so late to battle means very little time to get them all measured and to address the unavoidable anomalies we find. With all teams pushing to be exactly on the class limits of dozens of measurements and rules, there is no way they all succeed and corrections have to be made and the boat measured again. Where we have ‘soft limits’, like on water-tightness, rule compliance sometimes takes months for all to be at the same standard.

I get quite a few questions whether we can expect bows on TP52s as we see on Niklas Zennström’s new Fast40 Rán? The new Rán is too special not to mention.

Shaun Carkeek and Jason Carrington, in collaboration with Tim Powell and Jan Klingmüller of Rán Racing, pulled out all stops to produce the next-generation Fast40. Winning six of the eight races in her first event, we are not looking at a slow boat. Question is will the competition step up to the challenge or step away?

Rán is a proper one-off, built to today’s highest standards within the class rule constraints on materials and techniques, which are not that many. Most noticeably is the rule limiting builds to foam core. Foam is cheaper than Nomex but requires more hours and skill to get it right weight-wise. As in any class, weight is of course king.

There is no denying the most striking feature is the bow but second comes beam – it is a very wide boat. The bow shape is aimed at less drag and surface area – the latter can be translated to less weight and a lower vcg. Contrary to what some say, lowering air resistance alone does not make a boat gain much, maybe one or two seconds per hour. On a 40ft boat the crew look big and draggy compared to the 52s. The 4-5m2 less deck panel in the bow will translate to 30kg less weight in the ends which is always nice.

Most interesting is the very wide beam of 4.21m where earlier Fast40s by Carkeek are 3.85m. More beam adds weight as it requires more hull area but for sure it adds stability. Where the TP52 class rule limits beam to 4.42m the Fast40 rule limits beam at a royal 4.35m.

With the bulb weight of Rán and Carkeek’s defending champion Girls on Film the same (1,999kg) and draft of course on maximum (3.0m), you can imagine the effect of the crew sitting much further out. Walk in the park for Rán upwind in anything over 9kt of breeze and learn how to sail the boat in the light stuff. IRC certainly does little to discourage wide beam.

Actually, I am a little surprised that Rán’s bulb weight is not slightly under that of Girls’ to create more rating room to address the light stuff and have an even bigger motor going downhill…

Both certificates show a hollow steel fin, which puzzles me as a solid fin would reduce the need for bulb weight even further and is free RM in IRC, but possibly this fin is near solid and we are just facing a little mystification? A solid fin could be 600kg. Rán is all up near 70kg lighter than Girls, 3,908kg on the hook.

From many angles the boat looks great in the photos, not unimportant. Just cannot yet get used to Niklas and crew seeming to have grown… Shall not forget to mention the new Rán has the first ever EEL Propulsion electric engine. A start-up, possibly under the wings of the skipper’s tech fund Atomico? We all know that one of Niklas’s earlier start-ups was quite a success so do not think too lightly about this one.

Oh, I forgot to answer the question. The answer is ‘not likely’ as the TP52 rule is very strict on hull shape and sheer radius. A Maxi72 Cannonball-style bow makes no sense on a TP. It could be facilitated but if it ever were it would be part of a much bigger change, I guess.