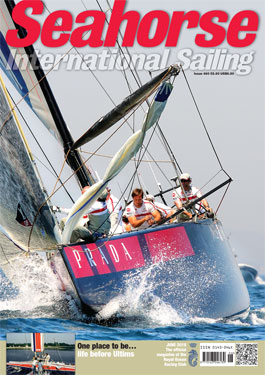 A wall of improvement
Now that’s a comeback. ROB WEILAND

This will be interesting
There has been America’s Cup trickledown… it just never seems to trickle down very far. This time could be different. BURNS FALLOW and JAMES BOYD

Master designer – Part II
And we hope that you have learnt as much in this series as we have. JOHN ROUSMANIERE

Not bad (for a Beatle)
The first of a two-part potted biography of one of the kings of the regatta waterfront. JIM PUGH sits down in San Diego with DOBBS DAVIS

Bigger than the Vendée?
Well, nobody can say Les Sables d’Olonne has not sewn up the market in singlehanded ocean racing. ROB KOTHE and DON MCINTYRE

Not over yet
When we first heard of the plan to resurrect the rotting former Whitbread racer Maiden we admit that we were ‘sceptical’. BRIAN HANCOCK

No end in sight

A club worth joining

World news
And ‘Oops’ went ARMEL, a smart way out for the Volvo Ocean Race, happy birthday in La Trinité, dancing with wolves… in a challenging place for a big yacht race, relief in New Zealand, a cruel place to sail and why RANDY DRAFTZ is king of regatta organisers. CARLOS PICH, PATRICE CARPENTIER, DOBBS DAVIS, BLUE ROBINSON, IVOR WILKINS

ORC – About time
And there’s no hiding this one

Seahorse build table – Gap in the market?
We certainly want one… MICHAEL AEPPLI

Sailors for the Sea