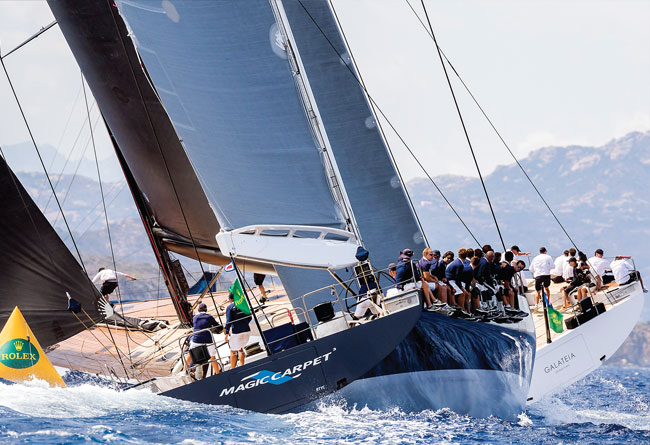 When it comes to maxi boat racing few marques define and have progressed the genre as well as Wally. Part luxuriously appointed superyacht, part refined racing machine, technically groundbreaking and always the last word in stylishness, Luca Bassani’s creations have been stopping people in their tracks with their aesthetics and stunning looks since the first Wally was launched in 1994.

Today Wally owners race hard and such is the competitiveness in the fleet that in 2017 there were different winners at each event, with the championship title undecided until the last gasp. One reason for the Monaco-based company’s success as a racing class has been firmly establishing the parameters of its brand. Wally yachts must have a minimum standard of interior fit-out to ensure they can be cruised as well as raced. This effectively prevents overly enthusiastic owners going too far down the racing route, although this has not otherwise quashed their appetite for top performance, with many Wally campaigns being run like grand prix raceboats. Today their magnificent craft bristle with top international pro-sailors and the very latest sails and state-of-the-art equipment.

As Luca Bassani explains: ‘A key factor in the success of the Wally Class is to allow teams to push the boundaries of competition, but within the limits of a truly cruiserracer division. Pure racer classes always have a short life because of the high running costs as well as a rapid drop in resale value. We protect this essential Wally quality carefully by continuing to evolve and improve our rules with the commitment to preserving the cruiser-racer characteristics.’

Wallys have been raced at the most glamorous sailing events in the Mediterranean ever since they were conceived. Wally competition at events such as La Nioulargue and Les Voiles de St Tropez has been a catalyst for owners of other brands of superyachts starting racing.

Main picture: Top-end racing indeed… as Galateia leads fellow Wallycento Magic Carpet3 around the top mark in Porto Cervo. In a nice touch that reflects all the Maxi classes’ historic ties with the Costa Smeralda the Wally Class recently became a signatory to the Charta Smeralda – a local ethical conduct initiative that forms part of the wider work of the One Ocean Foundation

Wally owners are almost all captains of industry, entrepreneurs and a highly competitive group, so the ante is perpetually being upped. To cope with their ever-increasing demands for the best-quality racing, the Wally Class was established in 1999. Today this is responsible for liaising with event organisers to establish individual starts, courses and results for Wallys, to look after the class’s rating system (currently IRC) as well, of course, as providing a ‘rather pleasant’ social hub plus a discussion forum for a band of very enthusiastic owners.

With input from these owners the Wally Class has developed its race programme into a regular circuit counting towards an annual championship comprising four events, each featuring the Wally division. In 2018 the circuit will start with the Real Club Náutico de Palma’s season opener in May, Sail Racing PalmaVela, move on to the Giraglia Rolex Cup in St Tropez in June, then September’s Maxi Yacht Rolex Cup in Porto Cervo. The sailing season concludes with Les Voiles de St Tropez in October, an event that Wally have supported since its inception in 1998.

[One indicator of the increasing competitive level in this class has been the creation of a dedicated Wally Class app that records the progress of each yacht around the racecourse using tracking data supplied by TracTrac. The app displays wind conditions and the winners on each leg, both in real time and under IRC. This blow-byblow race data has proved a useful boost to improving performance.]

The Giraglia Rolex Cup is a new fixture in the Wally calendar, no doubt prompted by Sir Lindsay Owen-Jones, whose Magic Carpet³ won the 2015 race overall and line honours in 2013 and 2016. In fact, Luca Bassani also made his mark in the Yacht Club Italiano’s annual event, winning line honours aboard one of his early creations, Wallygator, in 1997.

The Giraglia Rolex Cup starts with an inshore series off St Tropez, but the main event is its 241nm offshore race, finishing in Genoa and passing the Giraglia rock off northern Corsica. This will be the first offshore race to be included in the Wally Class calendar, counting towards the 2018 Wally Class Trophy with a two times points coefficient, while its inshore racing will be scored normally.

In 2017 14 boats competed in the Wally Class championship, ultimately won by American David M Leuschen’s Wallycento Galateia. However, this was only decided during the final two races of the final event and Magic Carpet³ and the Wally 77 Lyra finished tied just three points behind, after Lyra won Les Voiles de St Tropez. At a private dinner hosted by the owners of Magic Carpet³ Leuschen was presented with the winner’s Wally Class Trophy, designed and made by New Zealand boatbuilder Steve Marten and donated by North Sails.

Alongside Magic Carpet³, Galateia was one of two Wallycentos competing in 2017, with former Bugatti president Thomas Bscher’s Open Season (ex-Charles Dunstone’s Hamilton) out of the class, having extended her length to 107ft. Since Galateia’s launch these three boats have been swapping the lead on the water. For 2018 they will be joined by Tango, launched last summer at Persico to a design by Mark Mills and with interior design by Pininfarina (of Ferrari fame).

Among the innovations on Tango is her ramp deck. Mark Mills first incorporated this feature into his Maxi 72 design, Alegre. It provides structural benefits as well as making it easier for the crew to haul sails around, although it is quite hard to see on the Wallycento due to her colossal size and the Wallyrequired immense acreage of teak decking beneath which all ropes and deck gear are hidden. Tango also sports many TP52-type grand prix race features such as her highly refined engineering and carbon fibre construction and a rig capable of full and easy rake adjustment, despite towering 46m off the deck and carrying 640m2 of sail upwind and 1,398m2 downwind.

Following her first competitive outing at last year’s Les Voiles de St Tropez Tango will take entries in the box rule Wallycento Class up to three this season, but nipping at their heels will be the new Judel- Vrolijk-designed Nahita. Rolf Vrolijk describes her: ‘The Wally 93 concept is very close to the Wallycento idea. The displacement is very low for this kind of Wally and we expect that the boat will start surfing in even lower true wind speed than the Centos.’ While the new Tango weighs 47.5 tonnes, Nahita (due for launch this spring) is a featherweight 35.5 tonnes, in fact a displacement in the region of the Wally 80 Nahita she replaces.

Below: Not a bad turnout given the size of yacht… This is a race start for the 11-strong Wally Class at the Maxi Yacht Rolex Cup in Porto Cervo last autumn. At last year’s series the Wally Class formed the biggest fleet taking part. Of the nearest three yachts, two – Galateia (closest to camera) and Magic Carpet3, on her hip to weather – are Wallycentos, while fighting to keep her air clear in between them is Open Season, which started life as a Cento before she was extended to 107ft by her owner Thomas Bscher – who is also now International Maxi Association president 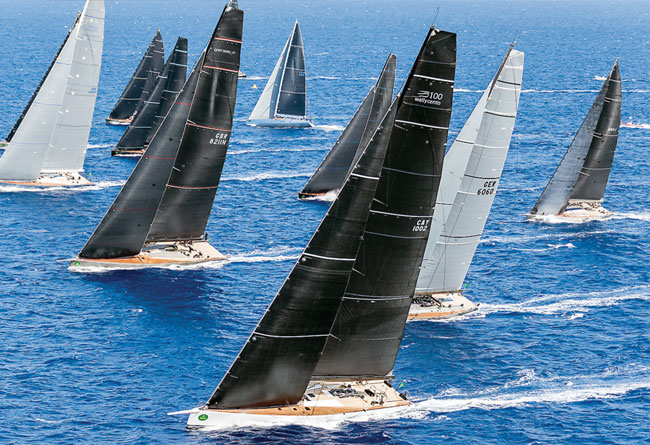 Vrolijk continues: ‘The hull is narrow, but has high stability and is optimised for light to medium wind racing. Maximum draft is the same as for the Centos (6.2m) and this will allow the boat to keep her lane after the start. The idea is that the boat will hang on upwind, but will make gains against her IRC rating downwind.’ As usual the new Tango has a full luxury interior, but its weight concentration has been optimised with her saloon area forward of the mast and with the crew cabin and galley midships.

Interestingly, the owners of both Tango and Nahita are graduating up to their new boats having previously owned Wally 80s. Their previous boats, plus sistership Tonemai, are all for sale via Wally’s brokerage department. Thanks to IRC’s effectiveness, when sailed well these boats are still very competitive – Nahita won the Wally Class at Sail Racing PalmaVela last season, where her crew included Croatian Rio 2016 470 gold medallists Sime Fantela and Igor Marenic.

Wally frequently find that owners joining their elite club – in fact, more of a large family given the age of their class – after buying older, smaller boats subsequently upscale, as they wish to create their own Wally yacht from scratch. Similarly, owners whose competitive days are now past but who have lost none of their creative spirit often build something perhaps more sedate while retaining all the Wally design pizzazz. Such is the case with the owner of the latest Frers-designed 44m Wally cruising yacht in build at Persico.

For those wishing to race, Wally encourage the evolution and updating of their boats – one reason the 10-year-old Wally 80s still pick up silverware. Luca Bassani: ‘The Corinthian spirit of the Wally Class has not prevented owners from improving the performance of their yachts and crew year after year. This strong motivation and competitive attitude have allowed 10 and even 20-yearold Wallys to be still competitive, maintaining their resale value.

‘Over winter over half the fleet undergo important modifications to appendages, sailplans or onboard weight distribution that involves naval architects and hyperspecialised professionals.’

But perhaps the ultimate accolade for Wally is how frequently their exotic formula has been copied since it first appeared those 20 years ago. But then there’s nothing like the real thing…