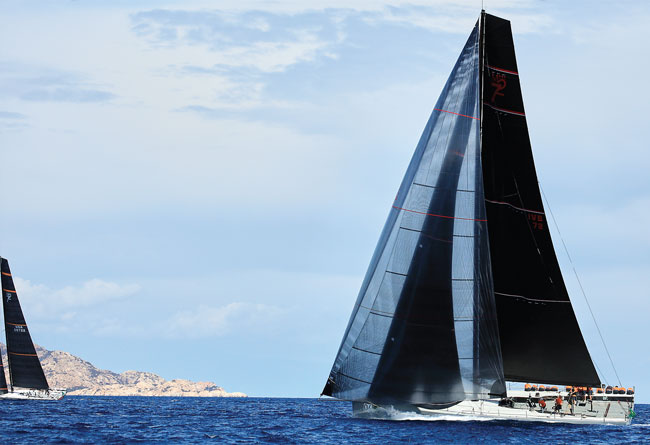 In describing the luff shape of Doyle Sails’ new cable-less Code Zero, the designers use a lens analogy – which neatly illustrates the smooth curve that projects forward but gives no hint what it actually achieves. That subtle bulge represents a significant performance gain and an elegant solution to an issue that has troubled these asymmetrical sails ever since increasing boat speeds started dragging apparent wind further and further forward to the point where offwind progress was achieved with upwind trim.

Main picture: the Maxi72 Momo on the way to becoming 2017 world champion at the Maxi Worlds in Porto Cervo. The three individual luff ‘lens’ groups are visible on this Code Zero – the combined effect being to allow the luff profile to project significantly to weather with no blowback of surplus material. Also thought provoking is comparing Momo’s sailing angle with Proteus to weather… racing with a headsail

As is often the case, class and rating rules often lagged behind the pace of technical development, leaving sailmakers and competitors to adopt clumsy work-arounds to extract the available performance within outdated regulations.

Almost from the time that asymmetrical spinnakers became mainstream, the name of the game has been to design flatter and flatter sails – until they came up hard against limits imposed by the rating rules.

Under IRC, for example, the definition of a spinnaker demands that the mid-girth measurement is at least 75 per cent of the foot length. Other offshore racing classes have similar constraints. The challenge was to achieve a sail with the area of a spinnaker and able to be used for heavy-air running, yet flat enough to operate like a masthead genoa at relatively tight angles in lighter airs.

The advantages of a sail able to achieve both purposes, but still be measured as a spinnaker, are most obvious when you look at relative sail areas: the largest rated jib area for a Maxi72, for example, is about 130m2, as opposed to the 500m2 area that most teams measure with as a maximum spinnaker area.

For years, and at great expense, sailmakers have looked for ways to achieve the full multi-purpose potential of Code Zero sails within the constraints of the spinnaker definition. The most common solution has been an ugly duckling compromise of a genoa-type shape supported on an integral composite luff cable, but with superfluous material along the leech to achieve the 75 per cent mid-girth target. As the apparent wind moved forward the trimmers would crank up the luff load and sheet on hard, leaving the excess leech material either flapping away, adding drag and fast degrading an expensive sail, or tamed with an over-tensioned leech-line acting like a handbrake.

‘The whole game has been to push the 75 per cent rule as far as you can, trying to find a balance between how much shape you put in the sail against how much leech instability you are prepared to accept,’ says Doyle designer and special projects specialist Justin Ferris, whose offshore racing CV includes multiple Volvo campaigns.

Two years ago Doyle took a very different approach. They dispensed with a luff cable altogether and replaced it with three full-luff vertical carbon-Technora panels supporting a genoa-type sail plan.

In a reversal of convention they met the 75 per cent mid-girth requirement by pushing the extra ‘girth’ to the leading edge and in front of the natural load line instead of the leech. When the sail was flying the airflow would suck this unwanted sail area around to the leeward side where it lay flush and quiet, leaving the rest of the sail to do its work as efficiently as possible.

‘We could eventually absorb about 90 per cent of the extra midgirth we needed to demonstrate by means of that front-end panel,’ adds designer Daniel Fong, who also has an extensive offshore, grand prix and America’s Cup CV. ‘We were able to achieve a flatter sail without an unstable leech. It was a huge advantage. The sails were very fast. If you can average 2kt or 3kt more than your opposition on a certain point of sail, it represents a huge gain over the course of a race.’

In taking this approach Doyle made sure to ask all the appropriate questions of the relevant authorities to ensure the sails complied with the IRC rule used by the Maxi72s and other large offshore racers; but then as their obvious performance advantages attracted more followers, the rulemakers moved against them… Last December IRC issued a new interpretation, arguing that these sails could be considered as having a double luff, due to the physical luff as presented for measurement not being the same as the effective luff of the sail when set. 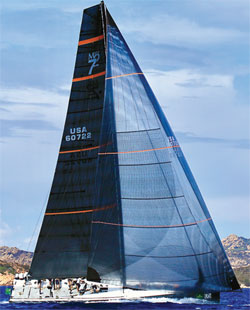 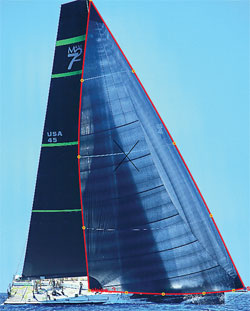 Top: Maxi72 Proteus also at the Maxi Worlds this year; of interest here is the way the leech profile is flying correctly due to the extra material needed for measurement being removed from the roach and transferred to the luff. And (above) Bella Mente trials the very first cable-less Code Zero during the 2017 Corfu Challenge.
Below: in this computer generated render the multi-part composite lens area of the sail is highlighted in purple. The other fibre variations within the sail are similarly denoted with a variety of colours 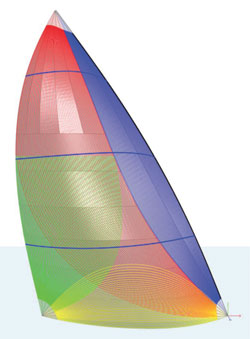 ‘They did not outlaw the sails, but they imposed such a high rating penalty they were effectively dealt out of the game,’ says Ferris. However, as is often the case when innovators push and probe around the edges of technology, valuable lessons had been learnt along the way – paving the way for the current mark two version of cable-less Code Zero.

What they had discovered was how the vertical luff panels, which replaced the cable, projected forward when the sail was flying. Instead of a cable locking the luff in a bar-taut straight line from masthead to bowsprit – with tack loads up to six tonnes on a Maxi72 – the cable-less version was free to assume a less-constricted attitude. And, in one of those rare win-win outcomes, the cable-less version flew straight but with loads reduced by 30-40 per cent.

Moreover, despite the reduced load, the entry and shape of the sail tended to project forward in a positive curve – the lens effect.

Developing this characteristic, the new sail takes full advantage of that lens effect with the three equal continuous vertical luff panels now absorbing much of the required mid-girth volume. ‘We no longer have any folding flaps,’ says Ferris.

‘The new sails are a lot more conventional in profile and shape. We use the luff projection to soak up some of the girth, which allows us to leave the leech as it was, while still managing to keep the flying shape flatter and faster.’

In terms of structure, the load reduction is a significant bonus. ‘There is obviously still a safe working load we must achieve with the fibre group,’ says Ferris. ‘We need to ensure there is enough carbon fibre through the luff of the sail to sustain the load while keeping the band narrow enough that it will furl and fly evenly and project forward.’

The carbon concentration is most dense in the ‘luff-lens’ panels. Closely packed carbon fibres are laid down running the full length of the luff as continuous single strands. From the lens area back the sail structure and fibre mix changes, moving into lower modulus fibres and concentrations away from the most loaded areas.

Without a cable the sail has to be bottom-furled, but the process remains unchanged and grand prix crews have had no difficulty switching to the cable-less version; in fact, they welcome the ease of handling. Shedding a high-torsion composite cable of up to 30mm diameter makes the furled sail much easier to fold and stow – which will come as particularly good news to Volvo Ocean Race crews and Imoca 60 singlehanders.

The Maxi72 Bella Mente owned by Hap Fauth has been a pioneer with both versions of the Doyle cable-less Code Zero sails. The first outing with the mark two version was in the final race of the inaugural Corfu Challenge regatta in July. ‘Bella Mente flew this sail on a three or four-mile reach in that final race and put 45 seconds on the opposition,’ notes Fong.

‘By the time the boats docked in we had two more orders; by the Porto Cervo series in September three of the five Maxi72s – including Momo, the 2017 Maxi72 world champion – had cable-less Code Zeros in their inventory. They are definitely effective.

‘And we are really only starting to scratch the surface with these sails, for which we have a patent pending. We are also exploring other applications. Certainly, we can see demand expanding into other classes. Classes without the 75 per cent mid-girth constraint can benefit just as much, if not more. The shape ranges we can deliver with this system are much greater than with a cable sail; it offers much greater flexibility.

‘We are also in the very early stages of looking at whether this can be useful with jibs, not that we are talking about eliminating forestays, but possibly sharing the forestay loads with a cable-less headsail. That of course could have meaningful knock-on implications for other performance areas. There is a lot of potential still to be realised.’