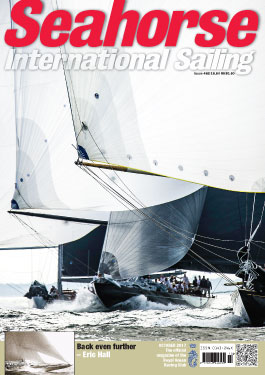 Most satisfactory
Good enough in fact that several new boats are into final planning for 2018. ROB WEILAND

Development – one year on
MAURIZIO COSSUTTI had quite contrasting examples of his design work racing in European regattas this year. He’s also fast coming around to the virtues of rating simplification…

Cup heritage?
Often quoted, frequently used in arguments over the Cup’s future but where does this heritage ‘stuff’ all actually come from? ERIC HALL

Talk about sex
Certainly the issue is going to be central to the whole 2017-18 Volvo Ocean Race. BLUE ROBINSON

Boats to bridges
Old GRP yachts don’t die, nor are they very good at just fading away. But things are changing…

No pressure
The new Volvo course is going to be the toughest for many years. Toughest on the sailors, on the boats and on the rigs… still built to the tightest one-design tolerances

Update
The politics behind the Protocol, MALCOLM PAGE has his feet firmly under his US desk and a difficult Porto Cervo ahead. CAROL CRONIN, JACK GRIFFIN and TERRY HUTCHINSON

World news
France, France, France, the perfect reminder, muted celebrations in Barcelona, PARKO moves to the back of the bus. Plus when should you leave it to the elders to drive progress? IVOR WILKINS, CARLOS PICH, PATRICE CARPENTIER, DOBBS DAVIS

Rod Davis – What now?
The multiple America’s Cup skipper, helmsman, tactician and coach has a clear idea what lies ahead

Design – One issue at a time
Lots of smart people are now working to develop the ‘usable’ wing rig with numerous different approaches being explored. RANDY SMYTH, TOMMY GONZALEZ and ERIC HALL

Sailor of the Month
Young blood and great expectations