In praise of flexibility 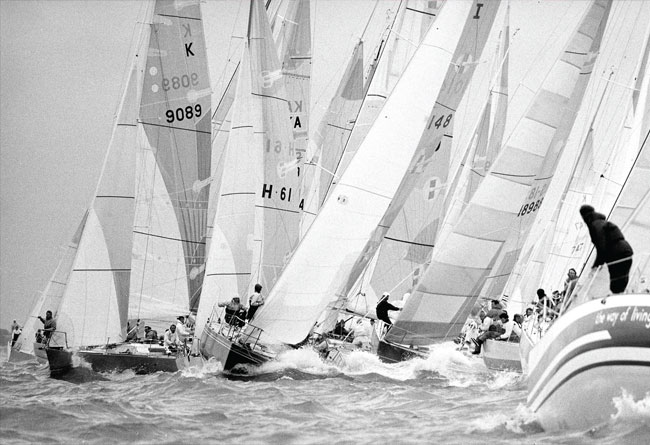 Is there now the critical mass needed to get a bit more ambitious with some new formats for international offshore events? ROB WEILAND

In October 2008 I wrote on the TP52 Class website  a news item about the long coastal race of the 2008 TP52 World Championship, at the time perfectly hosted by the Calero family and sailed from their marina Puerto Calero in Lanzarote. The title of the report was: FUN, FUN, FUN, 53nm in 4 hours 35 minutes! The crews and boats had a blast, I quote: ‘After yesterday’s short coastal race, the 14-strong TP52 fleet sailed the long one, approximately 53nm, in well under 5 hours under conditions that offered accidents, failures, disqualifications and lots of emotion. The northern breeze blew with an intensity of 20 to 25 knots throughout the race and gusts reached 35 knots on the western coast of the island.’

We were all pretty tired after the race, whether sailor or organiser, but not that exhausted not to have a beer or two at the event’s social area. It was a fleet full of big names – many are still racing in the class today, like Vasco Vascotto and Terry Hutchinson. Others moved on or pay us occasional visits, like Russell Coutts, Dean Barker, Paul Cayard and Jochen Schümann. Wonderful memories drift by when I see owner’s names like King Harald, Pedro Mendonça, John Cook, Torbjörn Törnqvist, José Cusi…

Ten years later much has changed and for sure the boats are a lot faster now but I cannot imagine I will write a race commentary again under the same header. Simply announcing a 53-mile race would cost me my job and setting off towards 3m waves in a breeze peaking at 35kt would label me close to insane. Yet 10 years ago I was just describing the mood after the race: Fun, Fun, Fun.

By any standards this year at the 2017 Rolex TP52 Worlds in Scarlino we had one coastal race and it was a good one in the sense that conditions were perfect (10-16kt, flattish water) and the course set had plenty of opportunities, keeping the fleet close together while making the boats fight all the way. Not that much reaching and most of the race up or down, which suits the Super Series TP52s as specialist reaching sails are not catered for in the class rules in an attempt to contain costs.

All in all it took this year’s fleet about three and a half hours to finish a course a little under 30nm in a straight line, but to describe the post-race reflections as fun, fun, fun would not reflect the feelings of most of the sailors taking part…

The mindset is still on inshore windward-leeward racing and anything else is a distraction. But it is foremost a mindset, as a week later you will find a substantial number of the same pro sailors onboard a Maxi72 on a 600nm offshore race or coastal racing in great style on a superyacht at a safe distance from the rocks at one of the yachting paradises like Porto Cervo or St Barths.

You will say horses for courses but that assumes owners are interested in one type of sailing only, or owners have two or three specialist boats – which is not realistic and for sure would limit our sport to a tiny group.

With the rise of one-design racing the interest in W/L racing has grown. No fun to get engaged in this speciality with boats of dissimilar performance potential. And if you do you better make sure you have the highest-rating boat in your start.

By contrast I do not see this as a valid argument against using boats of similar performance offshore; I do not subscribe to claims that you need a unique boat to do well in offshore events. But for sure it is in these offshore races where we do mainly find some rather ‘unique’ boats, boats not restricted by any limits other than what is permitted by the rating rules. Somehow, racing offshore, every dog has its day. Buying a lottery ticket has its attractions.

If anything boats like the TP52s and the Fast40s are potential Jacks of all trades as well as masters of most. Honed to perfection in close combat they are also grand prix weapons in coastal and offshore competition, often showing the more traditional racercruisers and cruiser-racers a fast shrinking pair of heels and giving one-off racers a good run for their money… (thus heaping pressure onto the rating systems).

Main picture: This is the 1985 Fastnet start; two years later the 615nm contest would be won by just five seconds.
Below: Team New Zealand close out the deal in Cagliari to win the 2010 Audi MedCup on their Botín-designed TP52. With offshore racing stronger in many regions it’s time to look again at giving these stunning boats more room to let rip. During the 1980s and 90s the offshore races in the Admiral’s Cup were normally too close to be boring.

How to balance rating, performance, market share and politics? In the maxi scene really only Maxi72 owners clearly vote for covering all disciplines but for sure not all owners share the same preferences. Most owners of secondhand TP52s like their coastals and offshores and optimise their boats for the handicap system the events require. They often see the Super Series as too narrow, too specific an environment.

I have to appreciate that I happen to work in this specific Super Series environment and so must somehow contain my desire to send them off on an epic voyage every now and then. The focus certainly has changed over the past 10 years, then again the writing was on the wall ever since the class moved from California to find its home in the Med.

It is rare nowadays to build new below maxi size primarily for fully crewed offshore racing. Chicken or egg but with it new boats will shy away from offshore optimisation, some will even go as far as to design below what is structurally required for the big offshore races (Melges40) or apply design concepts not fit to go offshore full stop (RC44).

The fact that most grand prix-level ‘mixed discipline events’ have disappeared does not help of course. Events like the Southern Cross, Kenwood Cup, Sardinia Cup and the Admiral’s Cup, but again was the events disappearing the chicken or the egg? Possibly and for sure partially true, it was the other common denominator: these were all team events. So was that the main stumbling block?

After the demise of these events we have seen that new trends in yacht design like canting keels and foils of all sorts have, so far, been predominantly introduced and tested in the offshore environment. For obvious reasons but this will further encourage the split between the two types of racing. Is this good or bad?

Probably best ask whether it is avoidable? I guess not, so then we have to make the best of it.

To find a new balance, one option could be that slowly the dayracers adapt to canting keels and/or foils as well. Personally I feel we should aim to keep boats in classes that still see healthy interest in new builds, like the Fast40 and the TP52. These boats are adaptable enough to take part in both types of racing, which allows a reasonable mix of events if that is what the owners want.

This dual-approach does not just ensure a healthy secondhand market, it also allows the return of a modern version of the great mixed discipline events we lost. For this to happen we need boats that can race in the day or in the night.

The reintroduction of such events would stimulate the process of finding creative solutions for multifunctional boats that are great fun in both disciplines. And those events will once more possibly be seen as a true test of all-round skill and stamina, equal to any world championship in our sport if not slightly above world championship status.

Why not?
Rob Weiland, TP52 and Maxi72 manager