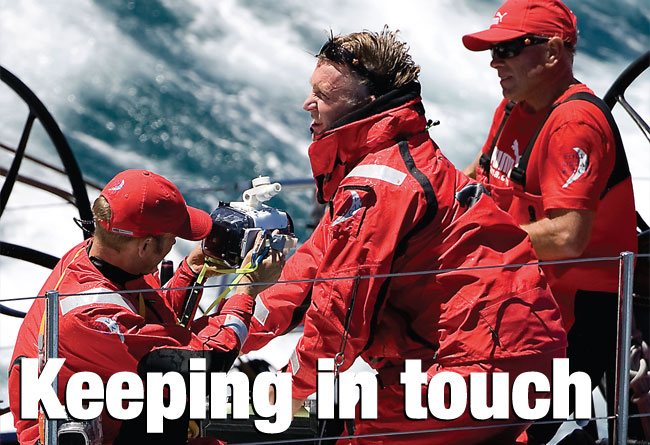 Seahorse: Are there big changes in terms of onboard comms this time around?

Rick Deppe: The real change is that we have put our size 12 boot into the recruitment and selection of the Onboard Reporters (OBR) as they are now known (previously it was MCM, Media Crew Member). We fired off a pretty global call last winter which earned us well over 2,000 applicants for the next race, including everyone from frustrated sailors to top-level war reporters. We stuck to our commitment to read and assess each and every one and eventually whittled the list down to about 150 who fitted the criteria we laid out… all really strong candidates, to be honest. It was a fascinating exercise!

Our key requirement was that for this race the OBRs are media professionals rather than sailing professionals; and we’ve had endless discussions here about what exactly is a professional, ranging from a Discovery Channel Deadliest Catch onboard cameraman to a well-known writer for The New York Times.

The main thing we wanted to avoid was the frustrated sailor; someone who is working for a team, sails sometimes but doesn’t make the final crew cut. The crew will like that, they will know the guy, know he won’t throw up and will keep the boat clean and the coffees coming. But that’s not what we want this time. We are determined to sharpen up the feed from onboard the boats in terms of editorial quality.

SH: What are the actual parameters of the OBR’s activities?

RD: They will solely be judged as a success or failure by the content they deliver off the boat. Their team may finish stone last but they could still be the star OBR because of the compelling story they tell of the race. That’s why we’re calling them the Onboard Reporter rather than the Media Crew Member – to spell out that they’re not there to be part of the crew but to report the race for our fans and the new audience we want to attract.

SH: Run through your own experience…

RD: My first foray into this race was with the shortlived Fortuna project in 1993, then I did the ’97 race on Chessie Racing as crewman. Interestingly, that was the race that got me interested in doing camera and media work. After that race I did other things including the Discovery Channel; then in 2008 I was asked to be MCM on Puma – where I won the Inmarsat MCM Award for that race. After that I was hired to run the project itself.

SH: Has the kit itself moved forward?

RD: I describe the new boat as a camera with a mast. Obviously it’s not that simple but what we have been able to do with the Volvo Ocean 65 is create the media systems as the boat is being designed rather than bolting them in later. This time we have fitted the boat around the systems from the start. So what we have now is a fantastic racing boat that is also a purpose-built media platform. In terms of the OBR, one of the key advantages of the situation this time is that you now have a properly sorted place to work; no more perching yourself on top of the prop lifting mechanism.

SH: How many fixed cameras are onboard this time?

RD: Five fixed including the two up on the spreaders. What we’ve added is one looking forward from radar height on the rig to cover all the sail changing; that one should also give a good sense of speed as you plough through waves.

There’s also a new camera under the lid of the coaming facing aft, covering the pitman and grinders. That will be a real game changer this time. It’ll be a great location for interviews offshore but in the inshore races everything will be going on right in your face. Then there’s also the usual stern camera, which is left running for much of the time.

SH: How much of the control is from your end and how much from onboard?

Above: the role of the OBR is both rigorous and potentially all-consuming with the need to both record material and then edit and send back to shore the best of your work.
Below: The author gained much of his experience working for the Discovery Channel.

RD: There are two layers to it really. All of the control can be onboard the boat by the OBR sitting downstairs, moving camera angles and so on. That’s the bulk of what they do. But we can also connect to the boat; theoretically we have all of the controllability that the OBR has. So theoretically we could do it all! However, it is obviously an issue if we are doing too much since the guy onboard has a much better picture of what is and is not worth filming at any one time.

SH: How close are we to the red button, with onboard media access on demand?

RD: Right now our finger is hovering over the red button. It’s certainly do-able and that’s one of the tag lines that I am working on here. I feel that in the last race we got certain systems in place; but this time we want to move the concept forwards so that instead of the OBR talking to the sailors it is more akin to the race fans communicating ‘directly’ with the boat. The tag line we use here is that we want to connect the sailor to the fan. And everything is in place for that.

SH: Will it actually happen this time?

RD: Yes, there will be opportunities for live access every day of the race.

SH: Do you mean edited packages being sent back or actual real-time comms?

RD: Both. There’s the stuff recorded and edited by the OBR and then uploaded to us here. That’s what we use daily for news and highlight shows. That’s what we call store and forward.

Then there are the live connections that we were starting to do last time on a rota of pre-arranged sessions; that works through what we call Livex. Last time we were a bit timid with that facility but that won’t be the case this time. We really want to pump that out.

So, will we be able to call the boat at will this time? Probably. Will Joe Bloggs? Probably not. Technically it’s possible but it will continue to be run through the hub here, with us putting forward questions we’ve received from the fans. That’s a choice based upon the way this race operates. I don’t think the sailors or teams would ever want to be on demand 24/7. And the team will know when they are live with a little red light on at the camera…

SH: And the actual technology…

RD: It’s the same technology as last time, all provided by Inmarsat. They facilitate all of the comms connections. There’s a new provider for the hardware this time, Cobham, who have a close connection with their predecessors, Thrane and Thrane. So very little difference in the physical terminals. Sure, we’ll play around a bit with the set-up but it’s all well-proven existing kit. We’ve made a few small technical tweaks for improved operability but the viewer is unlikely to notice anything.

SH: Is SCA trialling the new system yet?

But once SCA’s new boat is ready we will start to test the new equipment. The situation is a bit different this time. Previously all the raceboats would launch about March or April of the year of the race giving us a two-month window to load all the kit. Now it will be a more extended process as the boats follow each other out of the yard. SCA will be sailing next month while there’ll be other boats coming online in late spring of next year.

We’re also going to roll out all the media kit in phases. So SCA will start off with a rudimentary package, some refurbished kit from the last race then some new kit. But come next year and we will be full-on trialling the new kit as soon as each boat starts sailing.

Above: A big bonus for the coverage of the next race is this new coachroof cam with its adjoining mic.

SH: What about that OBR shortlist?

RD: As I said we got it down to about 150, and from that I was able to create a very loose database with criteria like gender, nationality, languages spoken, special skills and so on. That’s made it a lot easier when teams make their enquiries as to who can do what, to suit their needs as precisely as possible. So now, if we were asked, purely hypothetically, for a woman reporter for a Spanish women’s youth team it would just be a matter of a few minutes to compile a shortlist. The final decisions will be made by the teams later in the schedule, though with our close involvement.

A team can also show us people who they might like considered; but we are going to be quite clear about what we want. For example, if a team proposes two talented but frustrated sailors and we are putting them up against, say, a Discovery Channel cameraman or an Al Jazeera war reporter – then we will be demonstrating to the team what it is that we believe will best serve both their interests and the interests of the race as a whole.

Will we have some clashes down the line? For sure. We will doubtless pick someone who looks great on paper but once they get on a boat it all goes badly wrong. That’s life. Maybe all that ‘passion for the sea’ will go out of the window very quickly. But I think this is an essential process if we are to sharpen the coverage from onboard still further.

SH: How do you sum up your approach?

RD: The main things I’d like emphasised are firstly that this boat has very much been built around the desired comms systems; second, we’ve made big, big changes in the OBR selection – the name change from Media Crew Member (MCM) to Onboard Reporter (OBR) is very significant.

The third spoke of the whole thing is that we find the best ways to create a robust technological bridge from the sailor to the fan. We are obsessed with quality reporting and storytelling from the boats because it’s the primary way for us to sell the teams and grow the race… Personally, I can’t wait.