On the hook
STEPHEN ‘SPARKY’ PARK is at the very pointiest end in terms of the performance of Team GBR in 2012. He talks with ANDY RICE

The next step
Renowned for the quality of their boatbuilding Ovington Boats is now moving into design and development... starting with a slippery new skiff

Third time’s a charm? – Part I
It didn’t get off to a great start but no one doubts the pace of Farr Yacht Design’s new VO70. BRITT WARD

Serious history
There was gravitas mixed in with plenty of conviviality when the Whitbread and Volvo race veterans gathered in Alicante...

Update
CAM LEWIS is enjoying seeing the vision of his Stars&Stripes team of 1988 finally reach modern fruition, TERRY HUTCHINSON is looking to a busy winter, CAMPBELL FIELD is not getting over-confident and DAVID RAISON tells PATRICE CARPENTIER why he is gratified to have at last concluded his Mini Transat quest

Sailor of the Month
Two of the most respected... as well as the fastest

Below: locked and loaded, and on film of course, Mike Pammenter prepares to go up for the daily rig check on Camper during leg 1 of the VOR. The following day Pammenter would lose a front tooth after being thrown into the shrouds during a sail change. That is certainly not what you want to see (inset) when you look down at the bottom of your VO70 hull. This is Sanya’s flooded bow compartment after limping back into port with major hull damage 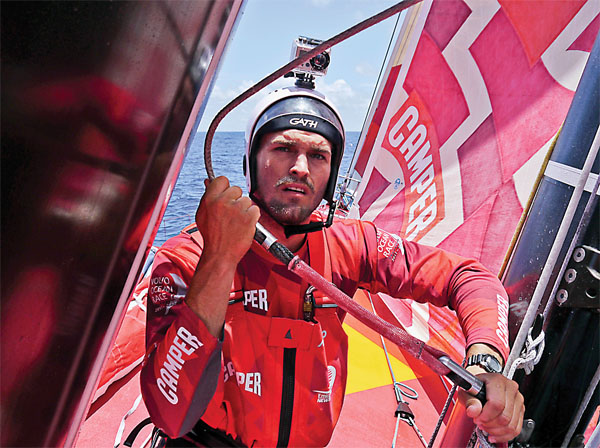