The reappearance of gybing centreboards in several high-performance dinghy classes a few years back coincided with the introduction of trim tabs on the main foils of some of the very fastest offshore multihulls. Foil specialist Dave Hollom looks at justifications... and consequences

According to their proponents, gybing boards aim to improve the performance of a boat by reducing or eliminating leeway. A conventional symmetrical board can only generate lift if it has some angle of incidence to the oncoming flow. If the board is fixed, relative to the boat, the only way that incidence can be generated is by angling the whole boat to the oncoming flow so that it proceeds through the water at an angle, the leeway or yaw angle.

On the other hand, if the board is angled to the flow, independent of the boat (a gybing board), the leeway angle could be reduced or eliminated and the boat should sail closer to the wind by an amount equal to the reduction of leeway angle. Because speed made good (VMG) is a combination of speed and angle, and because the angle is now smaller this should result in an improved VMG. Also, it is claimed, that because the hull is now not crabbing through the water at an angle but is proceeding more or less in a straight line, hull drag will be reduced, allowing the boat to sail faster, thus further ­improving VMG.

However, if these claims were true surely all classes that allowed gybing boards would use them, and this is by no means the case. Even classes such as the 505, which do use them, have a love affair with them for a period but then sooner or later revert to non-gybing boards. This state of affairs seems to see-saw and sooner or later gybing boards are back in fashion and so on, it seems, add infinitum.

In the Int 14s some people use them and others don't. Clearly, nothing in this matter is cut and dried...

To read on simply come and join us TODAY!!!!!
Please take advantage of our latest subscription offer or order a single copy of the March 2011 issue of Seahorse International Sailing 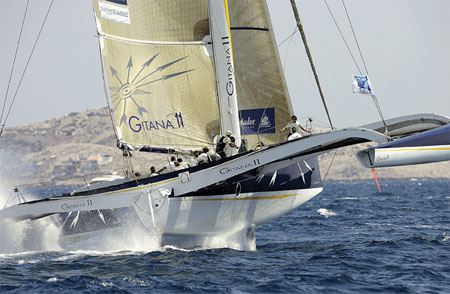