Mike Martin is one of the world's most accomplished dinghy sailors. The only person to have won the 505 world championship from both ends of the boat, he crewed Howie Hamlin to victory in 1999 and helmed his way to the title with Jeff Nelson on San Francisco Bay in 2009. His knowledge of the Bay and his prowess as a high-performance sailor make him the ideal choice as director of umpiring for the 34th America's Cup
... Andy Rice went to meet him

Seahorse: Much is changing with every aspect of the America's Cup, not least the speed of the boats and the style of match ­racing we're likely to see. How are things going to change from the umpire's perspective?

Mike Martin: We've all watched America's Cups in the past and seen how they're trying to umpire the things, a bunch of RIBs chasing around some boats. There's a bit of a concern on how that would work out in San Francisco Bay when the boats are doing speeds approaching 40kt. So part of bringing the ­America's Cup up to date is looking at the technology we're going to need to help officiate the event.

SH: So what you're saying is that this is the perfect excuse for bringing helicopters in, in place of RIBs, isn't it?

MM: Well, there are going to be a couple of helicopters out there, one for filming and one for our master GPS unit. We looked at small helicopters for doing the officiating, but to really get in there, to get in the positions that you would need to be in to make the call, you would be affecting the wind on the boats. So we actually shied away from that idea.

The way that we're going to do the officiating is through electronic means...

To read on simply come and join us TODAY!!!!!
Please take advantage of our latest subscription offer or order a single copy of the July 2011 issue of Seahorse International Sailing 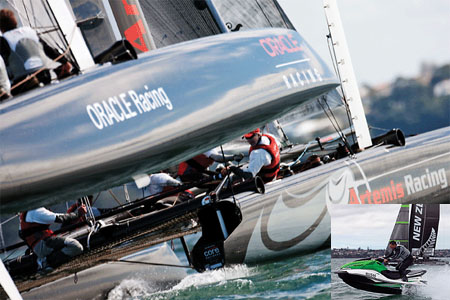