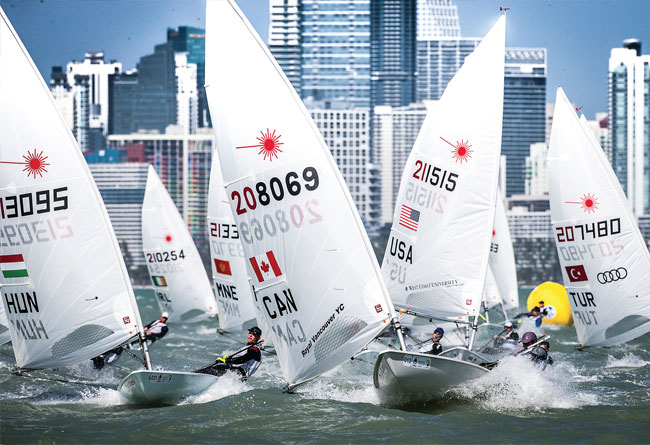 In F1 Lewis Hamilton knows where his power is coming from because his Mercedes McLaren is fuelled up before the race with a carefully calculated amount of fuel that depends on conditions, track layout, driving style and so on. A sailor, however, never quite knows how much power he’s going to get, which direction it will come from and how long it might last.

Solving the problem of predicting weather and current conditions has gone through a quantum leap in the past few years, particularly in long-distance offshore racing. But big gains are also being made in short-course competition, particularly in Olympic sailing. At the forefront of this drive for greater knowledge and forecasting accuracy is Buell Software, in Germany.

It all started just over 20 years ago when Ingo Buell, a PhD in physics, entered a national competition to win a prize fund put forward by Daimler Benz Aerosail to develop technology that would help Germany’s Olympic sailors succeed at the Atlanta Games in 1996. Aided by his Masters students at Kiel University, Buell developed some routeing software. Jochen Schümann, competing in the Soling keelboat, analysed the printouts every morning before racing. He went on to win the gold medal, and so Buell Software was born.

Buell have provided current and tidal analysis to a number of Olympic teams for the past two Games, London 2012 and Rio 2016, but their new program for 2020, SailTokyo, takes things to a new level with integration of wind data and many other new features, as sales manager Yvette von der Burchard explains: ‘It’s a cloudbased team solution designed to prepare your sailing team for the Olympic Games – Tokyo 2020, Marseille 2024 – and all the World Sailing events and Olympic class world championships.’

Main picture: The 2018 Miami Olympic Classes Regatta saw several of the big sailing teams employing Buell’s latest system to drill down into wind, current and actual boat performance. As well as the sailors the system is increasingly appealing to regatta organisers in the pursuit of fair courses in complex race venues

Marcus Baur represented Germany in the 49er at two Olympic regattas, in London 2000 and Athens 2004, as well as winning the European Championships twice. He has worked closely with Buell Software for a number of years. ‘Sailing Team Germany were sponsored by the German software giant SAP from 2009 to 2016. During this time SAP and Sailing Team Germany partnered with Buell Software for the Olympics, with Ingo Buell coaching the team and providing his tidal analysis.

‘Hardly anyone in the world has thought more deeply about the influence of sea currents on sailing races than Ingo Buell,’ says Baur. ‘As a physicist and programmer he completely demystified the problem and developed algorithms, software applications and easy-to-use apps that empower sailors to get to grips with the subtle, and sometimes paradoxical, influence of complex tides. Apart from being a great learning tool, it enables sailors and coaches to predict the impact of the current in relation to prevailing wind patterns. A priceless performance gain and a must-have tool in a sailor’s toolset. I wish I’d had access to that weapon during my time as an Olympic sailor.’

The core element of the tool is the unique routeing algorithm that reflects the characteristics of Olympic boat classes. You can plug in the polars for a Laser Radial and the system will draw in wind forecasts and tidal data and crunch the best course for a Radial. You can even analyse the differences between going left, right or tacking with the shifts up the middle.

Buell says: ‘SailTokyo enables you to create models of currents and wind from your measured data. It also offers various wind patterns and current models for education. Teams can collect, store and share their data in their own cloud. Plus SailTokyo offers interfaces to all common measurement systems for currents or wind and integrates your existing data.’

A team licence for SailTokyo is subject to an annual fee that covers all devices they use. While the base package is extremely powerful in its own right, Buell Software offer additional services to customise the software. This way teams can boost the value and differentiate from others.

Buell Software have a number of products that have proved popular with the keelboat community, such as their Solent tidal analysis tool which integrates the polars of a number of popular racing classes. One sailor who has become a firm convert is Andrew ‘Dog’ Palfrey, the much sought-after coach who has worked with many top-flight teams including Artemis Racing in the America’s Cup. ‘I have used Race Area Analyser in the Solent for a number of years. I have also used it in La Rochelle. During long days on the Solent I will often validate the information by doing physical current checks, particularly during the tide-change periods. I am very impressed with the accuracy of the tidal information.

‘I like that Race Area Analyser helps to keep things simple for racing sailors. The routeing feature gives a gain/loss time delta. This helps in deciding if the current is going to be key on a given leg, or if we can largely discount the current when making strategic decisions.

Above: Using detailed data on wind and currents that can be validated by coaches out on the water, combined with the polars of a class of boat, SailTokyo allows detailed analysis of different tactical and strategic options. This is of high value for preparation as well as post-race analysis. This (below) is the recorded comparison of different tactical solutions for two Lasers while training out of the 2020 Olympic Regatta venue in Enoshima

‘Having come to rely somewhat on the accuracy of Buell’s Race Area Analyser in my adopted home of Cowes, I asked Yvette about a solution for the Etchells Worlds held on San Francisco Bay last year. They did not have a ready-made product, but offered the SailTokyo solution with a chart of SF Bay and all the functionality for me to set up courses and import a third-party GRIB current file (which we easily accessed from TideTech).

‘Buell did a great job in preparing and delivering the software with a set of easy-to-follow instructions. SailTokyo proved to be a very important aid during our campaign. Early in our trip, during the pre-worlds and training, we validated the readings. They were very accurate, which gave us confidence that the output of the routeings would also be accurate. We were not disappointed.

‘A lot of the time the routeing result indicated very little advantage from one side of the course. We would call that “open course”, which meant we could focus on making strategic decisions on wind strategy, startline bias and fleet management. But even when there was not a favoured side, there was still a lot of flow. In this way the accuracy of the software helped a lot with laylines from long range, as we knew the compass angle the tide was coming from and the angle we’d be sailing on the other tack. If the flow was adverse a small deviation either side of our bow would make a big difference. It gave us a lot of confidence, armed with that knowledge. It enabled us to focus on speed and fleet management.’

SAILTOKYO
SailTokyo is a comprehensive software tool based on three pillars:
1. Racing
Preparation

2. Venue analysis
Currents
Receive an overview of currents on the racecourse by three options:

Wind
Receive an overview of wind situation on racecourse:

3. Education
Improve the development of young talented sailors by:

* Most routeing software is based on isochronic routeing. This works well for long-distance racing but for shorter distances something more accurate is needed. Buell Software’s unique routeing algorithm reflects the characteristics of Olympic and inshore races, enabling highly accurate calculation of best courses even over short distances such as on an Olympic class windward-leeward course.