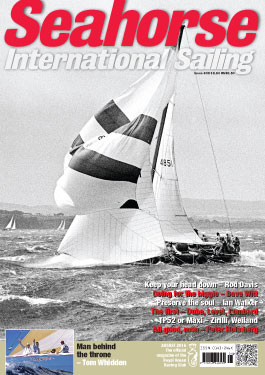 A delicate balance
But TP52 and Maxi72 manager ROB WEILAND is just the sort of benign dictator to pull it off...

It had to happen
Reichel/Pugh make their long-awaited move into large offshore performance multihulls. TONY BEALE

This game has changed
As the World Match Racing Tour follows the Cup onto two hulls, ANDY RICE finds that some of the old-school moves can still come in very handy

How fast?
BRUNO ZIRILLI and ROB WEILAND debate the battle for supremacy between TP52 and Maxi72

Update
With events slipping on and off the AC World Series programme JACK GRIFFIN looks at logistics and practicalities, PETER HOLMBERG is a big fan of ‘not broke-don’t fix’ and TERRY HUTCHINSON on filling the America’s Cup void

ORC column
And the world of offshore handicap racing seems to be in surprisingly rude health. DOBBS DAVIS

Design – Elegantly targeted
Two-handed offshore sailing is one of the biggest growth areas in the sport and so the Ofcet 32 shorthanded IRC racer is a timely new offering. YANN DUBE, ERIC LEVET and JOE LACEY

Sailor of the Month
Different eras but two extraordinary yachtsmen