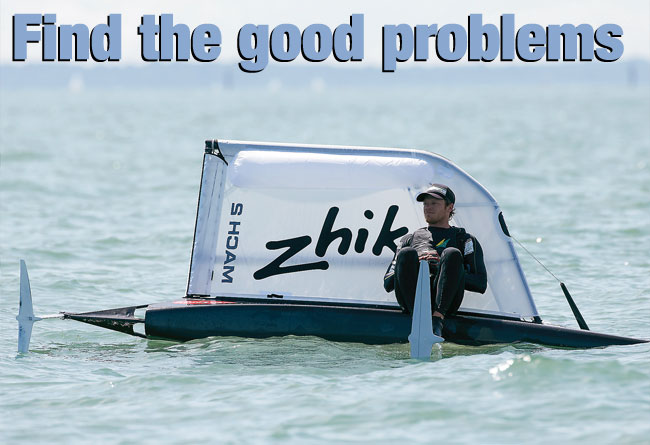 Zhik hasn’t been around all that long in the sailing world, yet it quickly became the clothing of choice for many of the world’s best sailors. Olympic medallists like Nathan Outteridge and Pete Burling aren’t going to compromise performance by wearing inferior kit, at least not by choice.

‘We were pushing to be able to wear Zhik a long time before it was finally adopted as the official clothing for the Australian Sailing Team,’ says Outteridge, who won 49er gold at the 2012 Olympics and steers the Swedish entry for the America’s Cup, Artemis Racing.

Outteridge has been wearing Zhik as his first-choice kit for a decade now, from not long after the Australian company was launched in 2004 following the Athens Olympics. It has made great strides since then due to a never-ending search for the answer to difficult problems, as founder Brian Conolly explains: ‘We try to find the problems worth solving in order to differentiate ourselves from the other products out there,’ he says.

‘That’s the approach we adopted from the very start, to try to make kit that sailors want to use and that they’ll find benefits and improvements from. Which, actually, is not as easy as it sounds. Sometimes finding the good problems is the hardest part, and once you find those good problems it can take a while to find a solution.’

Zhik made its early reputation by developing high-performance apparel designed specifically for the needs of dinghy sailors. ‘There was a lot of stuff in the sailing market that was basically just a copy of what had been developed for surfing or scuba diving,’ says Conolly. ‘A lot of stuff was very derivative, without really looking at what the different requirements were.

‘I mean, for a start, in sailing you’re mostly on top of the water – not in the water like you are with surfing or diving. And the flex requirements of the clothing – the way you use your body – are very different too. So there were some clear developments we could make early on that the dinghy sailors responded to very quickly and enthusiastically.’

Avlare
One of the next big developments on Zhik’s never-ending programme of innovation was the launch of Avlare, with similar stretch properties to Spandex or Lycra but which is also waterproof. Hmm, a rash vest that’s waterproof... Conolly admits it sounds almost too good to be true, and concedes that you have to try it to believe it. 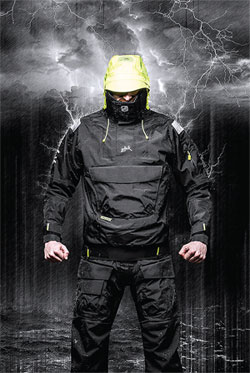 Top: product ambassadors don’t come any better than Nathan Outteridge – seen relaxing after winning the 2014 Moth worlds. Even at this relatively early stage considerable amounts of Zhik offshore clothing are finding their way into top campaigns; this (above) is the very light and flexible Isotak 2 offshore solution

‘It sounds obvious to say it, but one of the problems is that when you wear Spandex or Lycra, it gets wet, and you get wet in it. Not many people really question that. ‘You get wet, and you’re in the water!’ Trouble is, windchill is a big consideration for competitive sailors.’

So Conolly and his research team set about looking for ways of taking the same kind of hydrophobic technology found on many shell garments today, and seeing if they could achieve the same levels of water repellency using stretchier fabrics. It has taken many years of trial and error before Conolly was satisfied that they had achieved the necessary combination of stretch, water repellency and durability.

‘To apply hydrophobic technology and to make sure it lasts and really works well is actually very difficult,’ says Conolly. ‘But we’ve now sourced a relationship with a leader in this field that has granted us an exclusive arrangement with their technology. Avlare doesn’t have a membrane in it, instead we went for high-stretch woven fabric; you have to do unique things to filaments and fibres to make things stretch. We believe Avlare ticks a lot of boxes that sailors perhaps didn’t even know could be ticked…’

While its roots and origins are in sailing, Zhik is increasingly expanding its reach into other water-based activities and he sees Avlare offering answers to problems in many sports. ‘Avlare meets our “made for water” agenda at Zhik, where we want to provide great products to people who are on or in the water, whether they’re kayaking, SUPing, wakeboarding, sailing, whatever.

‘The actual product, when you experience it is quite interesting. It’s very light and disrupts windchill completely. It’s like wearing a very light flexible shell, but that’s really quite warm. If you’re a paddler for example and you want to go out on a cold morning, the Avlare will keep off the windchill and keep you dry. But as you warm up through exertion, the Avlare breathes so you don’t need to take it off. We’re already getting some great feedback from our “Team Riders” training out in Rio for the Olympics. It works really well through a range of conditions and we’re confident you’ll be seeing Avlare win medals in a range of sports this summer in Brazil.’

Isotak
While Zhik made its name in dinghy sailing, the focus is increasingly on bringing similar levels of innovation to the offshore sailing scene. Although some professional offshore sailors are nowadays unable to declare that they are using some of Zhik’s apparel, due to potential conflicts with existing sponsors and suppliers, unbranded Zhik clothing is finding its way onto a growing number of the best-known yachts. And Conolly says you can expect to see the brand occupy a much more overt, commercial place in future classic ocean races.

‘We want to prove ourselves at the extreme end of yachting, and we’ve already done so in a number of key events including the Sydney Hobart, the Vendée Globe, the Fastnet Race, the Mini Transat and a few more besides,’ says Conolly.

‘Early feedback from some top sailors is that a lot of the existing gear – while brilliant in most conditions – doesn’t necessarily make it to the end of the longest and toughest events.

‘It’s certainly well serviced by the other brands, but we wondered if we could do better, if we could come up with a product that is more durable and retains the highest levels of waterproofness for longer. In a tough environment like a round-the-world race, the membrane in the fabric gets really beaten up – with all the sitting, the kneeling, moving about the boat, doing things repetitively over a long period of time.

‘Now there are good industry measures for breathability and waterproofness, but for waterproof durability there was no standard at all. So we wanted to investigate this, and it sparked some interest with some universities in Australia. The result is that they’re going to publish an academic paper about a new measure of waterproofness, which will enable us and others to work to a far more sensitive and measurable datapoint when designing for extreme ocean sailing.’

While Conolly acknowledges that other manufacturers put their products through rigorous durability tests and washing tests, he’s not aware of anyone else going to the lengths that Zhik has gone.

‘We have made a machine that cycles around predictively, with both hard objects and water inside. Using different balls with varying sizes and levels of hardness, we wrap the fabric around these balls and it gets wet and gets banged up for a few thousand cycles. We then take the fabric out and put it on a standard hydro-tester and measure its subsequent pressure resistance.’

The result is Isotak 2, which Conolly believes offers the best combination of form and function out in the market today. ‘Because the membrane we’ve developed is so durable we could bring back the weight of the fabric itself. It’s quite ergonomic and lightweight for the durability it delivers.’

The combination of lightweight and durable has been a theme of Zhik since it started. One of the company’s longest-standing Team Riders is Nathan Outteridge who has been wearing Zhik for more than a decade.

‘When I first spoke to Brian about wearing his gear, I was only just getting into the 49er and learning how to sail it. When I got the first wetsuit through, it was really thin but still warm. Compared with what I’d been used to wearing, it was so different. In fact, I called Brian and said, “You need to make me something thicker because I’m going to bang up on my shins on the 49er! I’m still learning how to sail the thing.”‘

Even if that first wetsuit was ‘too thin’, Outteridge has been a Zhik evangelist ever since. ‘The great thing about Zhik is they always listen to what you have to say. And with Brian in particular, if there’s a new technology that’s worth exploring, you can be sure he’ll be the first on to it.’