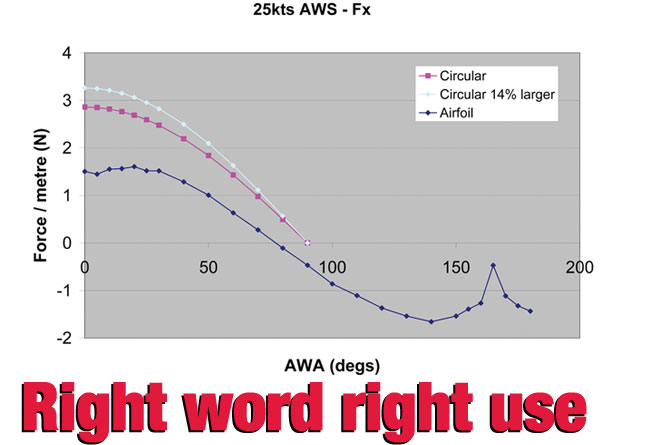 Airfoil carbon fibre spinnaker poles are this year’s must-have J-Class accessory, but the best airfoil rigging actually does something useful

Airfoil SCR
Listening around, the word airfoil comes up from time to time. We hear of airfoil-shaped stanchions. And did someone say recently, airfoil-shaped spinnaker poles... Seriously?

Airfoil components on yachts are nice and may give everyone the feeling that no stone is left unturned, but where you gain the most difference with an airfoil shape is in the rigging, which has real numbers to back it up. The word ‘airfoil’ in Hall Airfoil SCR solid carbon rigging is anything but a buzzword. It represents a quantifiable performance increase.

Background
A year after Hall introduced SCR solid carbon round rigging in 2008 we introduced our Airfoil product. Streamlined rigging significantly reduces drag over round-shaped rigging, a fact known for a long time. Aircraft started using it in the late 1920s and modern sport bi-planes still use it. Tests over the years even showed that some of these aircraft couldn’t take off with round rigging. And 12 Metres have used streamlined rigging since they began racing for the America’s Cup in 1958. 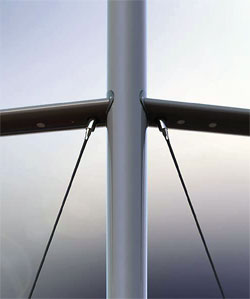 Main picture: No doubt about the drag gains of airfoil rigging over rod. The spike around 1600 AWA (only seen these days when storm-bound) is the rod stalling as the sharp trailing edge now becomes the leading edge; these graphics are from the Auckland Twisted Flow Tunnel and the flow (bottom) is from the University of Michigan. Hall’s clean spreader system (top), seen on the Baltic 108 Win-Win and the tiny SCR rod profile (below) 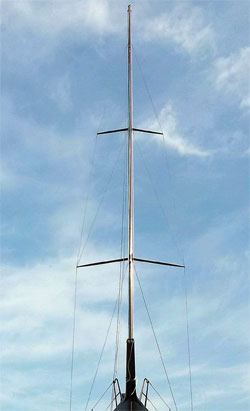 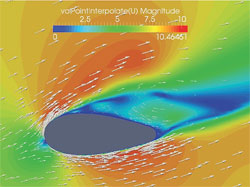 We knew that Airfoil SCR would bring big reductions in drag. After all, we asked ourselves, how fast could a racing yacht be with a round keel fin? Or an aeroplane with round wings, not to mention even getting off the ground?

Therefore, we brought Airfoil SCR to market as fast as we could. And Airfoil SCR promised a further gain: the profile. Until Airfoil SCR came along there has not been an airfoil-shaped rigging product. The streamlined rigging mentioned was made by flattening round steel rods into symmetrical elliptical shapes. We knew that with the ability to mould carbon composite we could now create a more optimum low-drag shape that maintained drag reduction to higher Apparent Wind Angles (AWA) due to better stall characteristics.

Quantifying the advantage
But to begin with we thought that at larger AWAs the drag of Airfoil SCR might actually exceed that of rod... We had to find out just what the limits were. We contacted the University of Michigan and asked them to compare Airfoil SCR with equivalent area/strength round rigging. Their study compared the two both digitally using CFD and empirically in their ship model tow tank (Michigan’s wind tunnel was unavailable at the time). Michigan’s findings were then further verified when we tested Airfoil SCR against our own round SCR in the University of Auckland’s Twisted Flow Wind Tunnel.

In both studies, Airfoil SCR showed 40-50% less drag than Hall Round SCR and even less than a test article simulating larger, bundled carbon rigging products. What we did not expect, and were pleasantly surprised about, was that Airfoil SCR maintained its drag advantage over its round counterpart through a 0-900 AWA range.

We found that while the drag component at some point exceeds that of round rod, a lift (thrust) component more than compensates, because rod has no thrust component. This can be readily seen in the graph opposite from the Auckland wind tunnel report.

What is the impact in the real world
Looking at a typical modern 100-footer, using standard drag coefficients of round shapes, the drag of the side standing rigging is about 30kg at 22kt Apparent Wind Speed (AWS). Applying the wind tunnel-produced figures, the drop in drag is about 12kg.

But can 12kg less drag possibly make a difference on a 100- foot yacht? Actually, yes. Dramatically. At 9.5kt boat speed, 12kg is equivalent to dragging 30m (or a boat length) of 14mm braided line from the stern upwind. Even a sailor with no knowledge of VPPs or other aspects of yacht design science knows that dragging that amount of line astern will ruin your chances every time.

On multihulls the impact is more significant because drag varies as the square of AWS. At their elevated apparent wind speeds, drag differences between Round and Airfoil increase dramatically. At low AWAs Airfoil drag is very low, making rotating mast diamond shrouds on multihulls a particularly good application.

Continuous improvement
Airfoil SCR has continued to be refined and broadened. Sizes have increased at a measured pace and end terminals have been improved in compactness and manufacturing process. At the same time both safety factors and fatigue life have increased even further. In addition to our standard discontinuous system, for several years now both Airfoil and Round SCR have been available in continuous rigging, making for an easy retrofit when required.

We also continue to add new products to the Airfoil line, notably the low-windage spreader attachment system first seen on the Baltic 108 Win-Win, that followed two years of testing on the company’s Nelson-Marek 1D35 test yacht.

Future development
We are now looking at applying Airfoil SCR to backstays, reducing the drag of another very long stay, as well as forestay applications using soft hanks. Airfoil SCR’s low frontal area and its ability to twist with the leading edge of the jib could potentially further enhance performance. Also to consider: Airfoil SCR bobstays. Obviously, it’s a stretch to say that a low-drag bobstay will be a game changer, but on the other hand it all adds up...

Buzzword Airfoil can legitimately be referred to as just a buzzword in many racing applications. For instance, where is the advantage of airfoilshaped stanchions when buried by 20 crewmembers on the rail. And spinnaker poles? If they are not used upwind, what’s the point? Better question: if spinnaker poles are hardly used any more, why bother ever thinking about it?

But ‘buzzword’ does not aptly describe Airfoil SCR. Rather, Airfoil SCR is a quantifiable performance advantage any way you look at it.

Click here for more information on Hall Spars and Rigging  »