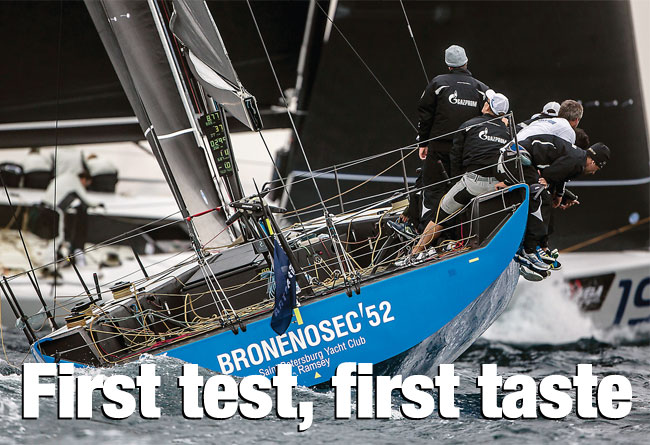 No better place really than the RCNP terrace to type the opening lines to the 2016 Super Series page as the Gaastra PalmaVela reaches its conclusion with nine TP52s competing.

The influence of the 52 Super Series with its mainly windward-leeward courses means that today’s TP52s are all honed to be able to sail upwind in a very efficient high mode. With up to eight boats racing, plus a bit of luck and an even racecourse, you can still find clear lanes on a two-mile beat in a less specialised upwind mode… but not with 10 or more boats. So the success of the 52 Super Series in a way adds an extra limit to our TP52 box rule.

It is, however, amazing how much you can optimise within what at first sight is a tight set of constraints. Competition and stress go hand in hand: positive stress in the sense of a welcome challenge helps to focus and enjoy the game where negative stress gets in the way of performing and, possibly worse, of having a good time. The event organiser cannot do much to control the stress on the water other than provide a fair playing field, but for sure we can try to provide stress relief ashore.

Blowing off steam with the class manager is an option but not my favourite one. I’d rather see positive ingredients in place, good shore facilities, friendly staff and a generally more relaxed feel. There is a big difference between coming in to a cramped berth with nowhere decent to sit down, compared with arriving on a spacious pontoon close to a nice competitors’ lounge with a positive buzz. So we try to find pleasant venues and mix trusted old favourites with ambitious new locations.

The TP52 class members control the TP52 rule – we try to balance stimulating new ideas with rule stability. The competitive lifespan of the 2015 boats is at least three to four years and, with possibly some upgrades, five to six years. But things do move along and I expect we will see some nice new ideas on the latest Botíndesigned Interlodge – it is a box rule not a one-design.

Campaigning a boat at this level is very much like Sisyphus pushing his rock up the hill. You know it will be hard at times and you know the rock will roll back at times. Trick is, I guess, if you want a class and an event to have longterm success, to ensure that pushing the rock itself is enjoyed and not just the fleeting moment at the top. Rolling rocks uphill with a team, whether a sport team or a venue organiser’s team, certainly can add to the fun… as well as to its complications.

One crew noted today that ‘you should keep a record of the average age of the crew on the TPs’, it seems that every year this goes up by one year. At first sight he is not far off the mark but I do see new faces, younger faces, certainly in the shore crews.

You have to go through the ranks and being a shore crew is one of the ways to get onto the boat. Still, a good idea to record age and function and find the trends. Fact is that sailors like to crew in the 52 Super Series and, while quite a few switch teams at times, you indeed see a lot of familiar faces year in year out.

A new development to me is that this year I see crew wearing tiny devices recording the onboard communication, to make it possible to analyse these communications after racing and then of course come up with suggestions for improvement.

This could be something to consider elsewhere, like record the race committee or umpire communications. At the Super Series there is constant debate on how to optimise and promote ‘the product’. Besides the website, Facebook, Twitter and Instagram activities, an app is now being developed. We have the live commentary and tracking combination and last year we tested adding in live video.

Sadly it is not the sky but the budget that is the limit for all this. Where to allocate the money and how to get the most out of the resources you have? Personally I am a fan of the ‘stills’ of our sport, good old-fashioned photography. A picture can say more than a thousand words, imagination inspired by a good photo is hard to beat.

But there is nothing better of course than the live experience. At one of the race days at each event we offer the opportunity to have a guest on each boat. I have not yet seen a guest come off the water without a broad smile, whether soaked, burnt or just shaken and sometimes stirred. Of course this is not a turn up and hop onboard thing, there has to be some relation to either the teams or the event and its partners to end up on the guest list and from there on a TP52. But then again, I have filled last-minute vacancies with a lucky ‘right time and place’ person and every time it made my day to see him or her come back off the water. Come visit us at our 2016 events, you never know…

Gaastra PalmaVela is in its final race. As for two days the sun was above the UK and Holland instead of Palma Bay it has been complicated on the water under the clouded skies with many shifts over the track. Quantum Racing with Terry Hutchinson calling the shots read the conditions best over the four days, while astern it was very much up and down for a large number of teams of which Azzurra, Bronenosec and Platoon made the best impression.

Harm Müller Spreers’ Platoon now with Jordi Calafat as strategist and Quantum sails also showed well early on before derailing from 2nd to 4th on the final day. Most afterguards have not changed from 2015, but I see Adrian Stead as the new strategist on Bronenosec scoring a good third overall, 2pt behind Azzurra.

Clearly Quantum has straight away set the 2016 bar at grand prix level. Too early to jump to more conclusions.