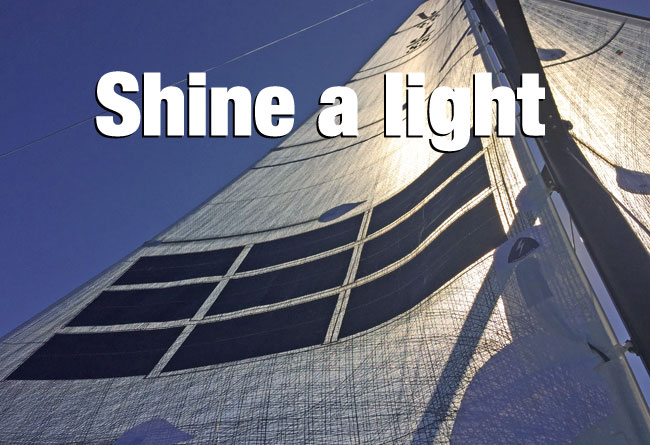 In the past sailors have taken the ecological high ground over other boaters, yet modern sailing requires far more electrical power than it used to. With new onboard technologies and their growing demands for power, it’s clear that sailors now experience regular energy shortages while cruising and/or racing, even over relatively short distances. And of course the problem grows exponentially when you are racing across oceans and around the world.

Sea and sun go hand in hand, so solar power has long seemed to offer an answer to this problem. However, rigid solar panels are heavy, bulky and require a lot of ingenuity to install discretely; but what about producing electricity with our sails?

Sails offer the largest available surfaces on a sailboat which makes them the most logical place to collect solar power. But if this has not been done before, then there must have been good reason.

Indeed, it is only very recently that usable thin photovoltaic films have surfaced from the R&D laboratories as a viable commercial product. Even at the start of 2016 the number of suppliers of thin solar film can be counted on the fingers of one hand. Also, none of the latest cutting-edge products were originally intended to be used on a sail or by a sailmaker. In fact, when I first contacted the heads of these companies my ideas were generally treated with a large pinch of salt.

But on second thoughts, being able to test their new solar films in the harsh reality of the marine environment started to look like a useful opportunity: UV, salt, high-pressure seawater, flogging, folding, being stepped on, and so on, suddenly this became a worthwhile complement to ongoing bench testing.

Bringing electricity inside a laminate or onto a woven sail is not the easiest thing to do. Efficiency, durability and safety are serious issues. Helpfully, however, over the past decade our own French loft (UK Sailmakers) has been developing the ‘titanium’ sailmaking process, using relatively less resin, dry continuous yarns and moving away from infrared ‘cooking’ pads to a large 13m oven for better heat and humidity control; the titanium solution appeared to offer a leg-up in our quest for efficient solar power generation.

For over a decade we have been laminating all sorts of films and yarns, even optical fibres, but the circuitry and flow of electricity inside a sail was very new to us. But consulting with top photovoltaic labs such as IMEC in Belgium, Holst in the Netherlands and recently with CEA in France, I realised that it may not all be as difficult as I had imagined.

In fact, in November 2014, the Open 50 Défi Martinique, skippered by Daniel Ecalard, demonstrated the durability of some of our early experimental technology in the Route du Rhum when the circuitry and connections of the solar films we installed near the head of the mainsail survived a full gale in the Bay of Biscay.

The system then went on to survive the 25-day Atlantic crossing, during which Ecalard logged 4,677 miles. The solar films withstood water, salt, rough poundings, flogging, thunder and lightning – none of which seemed to affect charging capacity.

There was a lot more work to do, however. Highly conductive carbon yarns had to be replaced with black aramid, diodes had to be incorporated to prevent unwanted polarity switching between the two sides of the sail, circuit breakers were fitted at the tack, alternative bonding systems were required, plus we had to identify the best way to wire up the sail and bring electricity down to the photovoltaic regulator inside the cabin, then feeding it into the battery system via a selector – or via a bus for boats using an electric engine.

We have been experimenting with two types of thin solar cells for the ‘Power Sails’ system (aSiGe and CIGS). Both films are cooked using one bar pressure at 120°C during the lamination process in our oven. We also looked carefully at DSSC, CdS/CdTe, OPV cells and some other very new technologies, but we do not feel confident using them at this point.

We are expecting other breakthroughs soon; in the solar industry things seem to evolve very fast, perhaps at twice the rate according to Moore’s Law. Every industrial country is developing new thin film prototypes, many of which will become commercially viable in the next few years. (Surprisingly, China is not yet among the leading nations in this particular sector). 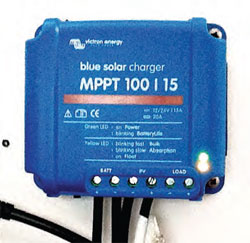 Main picture: the first J/88e in Annapolis. There can’t be many yacht owners who would not be attracted by the idea of replacing that messy diesel with electrical power – sail-mounted solar panels, efficient electric motor plus lightweight lithium batteries. Only a small regulator is needed on mid-sized installations (above).
Below: the mainsail goes up on Daniel Ecalard’s Open 50 ahead of the rough 2014 Route du Rhum, during which her solar installation performed flawlessly 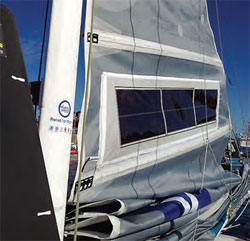 To qualify as a thin solar film for sailmaking, the film should be 65μ-150μ thick giving the finished solar film+sail material a thickness of 0.5-0.75mm, with a weight of 200-400g/m2; this after full encapsulation into a sail laminate or bonded over a woven material like Dacron.

And the small bending radii of the best thin solar films will now allow a tight wrap around a pencil. In other words, the thin flexible films used in Power Sails are nothing like the films used for typical camping or boating applications. Those ‘traditional’ recreational panels are at best semi-flexible pads weighing 2-3kg/m2 and with 30° maximum allowable bend.

Every technology has its pros and cons. Some solar films work only in direct sunlight, some work with partial luminosity, others work well with artificial interior lighting (shopping malls, hospitals and so on) and do not do so well outdoors. Some emit heat when operating, some are very moisture sensitive, some are good for high voltage while others offer better output with low voltages. For the Power Sails system we choose the film and cell solution best suited to each application.

The internal circuits we build use a highly flexible thin copper-composite. Armoured solar wires run down the luff of the sail, just as an over-the-headboard leech line runs to the tack. All the junction boxes and connectors are IP68 rated (IEC standard 60529) hence submersible and waterproof. The connectors are H4-MC4 industry standard. Diodes (often outside the sail) are used to protect each side from polarity inversion, with the circuit breaker at the tack used for extra protection. Power Sails generate DC power, while the thin film solar panels can be wired in series or in parallel, depending on the existing system and the output and voltage required.

Thanks to internet chatter after the Route du Rhum, it took only a few days for Finnish electric engine manufacturer Oceanvolt and the Arcona boatyard in Sweden to contact our Swedish office with a view to working together on the zeroemission Arcona 380Z programme, the world’s first zero-emissions production sailboat. The first 380Z was launched last May in Helsinki, the result of an exciting collaboration between diverse companies in Sweden (Arcona and UK Sailmakers), Finland (Oceanvolt), Netherlands (SuperB lithium batteries and Victron regulators) and France (UK Sailmakers and Solar Cloth System, manufacturing the 1kW Power Sail).

The Arcona 380Z and Power Sails project involved manufacturing a combination of internally integrated and external removable solar films. Normally the membrane-integrated solar films are set above the first reef, although for the Route du Rhum the panels were placed between the two top full-length battens to ensure better longevity and also because the head of the main on an Open 50 normally protrudes out of the cover while in port. It’s still preferable to install solar panels on a full-batten mainsail for durability reasons, but we are slowly moving into outfitting standard short batten mainsails as well.

Another important project came up last summer: a prototype boom furling Power Sail main for the Minibee 6.50, a dayboat manufactured by Building A Future Foundation, promoting the marine industry in Sri Lanka. In this case, the possibility of furling and unfurling a solar sail for an extended period of usable life could open the door to other major applications: replacing the UV cover by solar films on furling genoas, ‘self-powered’ sun awnings and shades for shops, building-integrated photovoltaic (BIPV) applications and even self-powering solar tunnel greenhouses.

Power Sails’ most recent deployment was last autumn at the Newport and Annapolis boat shows, delivering to J/Boats a 400W solar mainsail for the new J/88e (electric), which combined Power Sails with an Oceanvolt SD6 electric engine, Valence Lithium batteries and Victron regulator to create the world’s first solar/hydro-powered J/Boat.

For J/Boats the aim was to achieve silent operation under power, delivering an emission-free low-maintenance motoring alternative. (To further the green theme, both Arcona and J/Boats have also been experimenting with alternatives to toxic underwater paints, J/Boats opting for ZO Antifouling and Arcona choosing the Sonic Shield system from CMS Marine, using pulses at ultrasonic frequencies.)

Several French and American boatyards, including multihull manufacturers, have since shown interest in our clean sailing approach. The average speed of multihulls and the need for two engines make them a good candidate for the hydro generation or ‘creating energy while sailing’ function of modern Z-drive electric engines, while the large surface area of a typical cruising cat’s fully battened mainsail plus bimini top also offer excellent opportunities for a Power Sail installation.

Overnight racing boats (Fastnet, Middle Sea Race, Newport-Bermuda, Sydney- Hobart, and so on) could similarly employ a narrow strip of solar film above the first reef, not large enough to add significant weight to the sail, but big enough to make it unnecessary to crank up the engine early in the morning to recharge batteries to keep the electronics running. Power Sails are now developing a targeted product for this application.

There is a growing conviction among all sailors about the need for clean boats, clean regattas, clean seas and better practices to help conserve and protect the oceans. The marine industry is starting to mobilise for a systemic change for the health of the marine environment. In this quest the sun may well be our best ally.