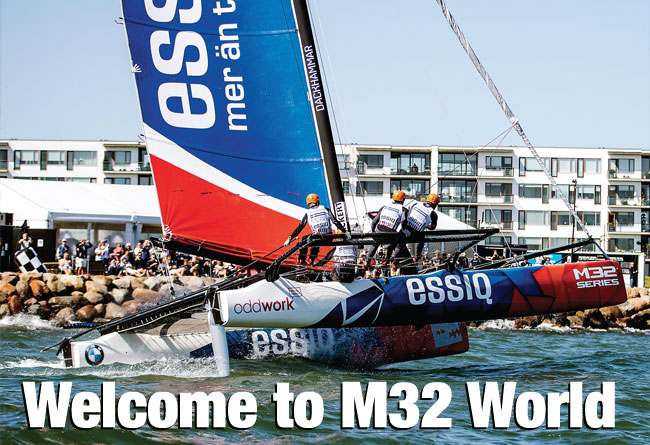 On 11 December 2015, on the island of Hönö near Gothenburg, a brand new, purpose-built facility was unveiled for mass-producing M32 catamarans. This gargantuan 3,050m2 climate-controlled hangar has been geared up to build 100 new M32s through 2016, with plans to further expand production the following year.

All this for a catamaran that co-designers Göran Marström and Kåre Ljung originally envisaged as a toy for them to enjoy with a few friends. They imagined just four or five would ever be built and raced locally in Sweden. But Swedish entrepreneur Håkan Svensson decided the boat deserved a bigger audience, and the new facility is part of his vision for populating the planet with hundreds, even thousands, of M32s. That vision is M32 World. 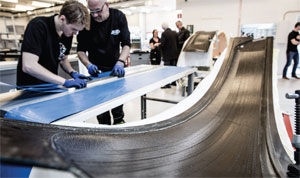 As many America’s Cup sailors have discovered after a lifetime of racing heavydisplacement keelboats, multihulls can be a surprising amount of fun. After a life changing outing on Lake Garda in 2012, the seed of an ambitious idea began to germinate in Svensson’s mind, until by early 2015 the entrepreneur was seriously wondering if this simple, easy-to-sail but very quick machine could become the vehicle to drive a revolution in sailing, an agent for lasting change. ‘I had organised the M32 Series in Scandinavia for a couple of years, and I’d started to have conversations with the World Match Racing Tour, and a lot of things began to come together.’ They came together in the form of a company designed to turn the M32 into a global class.

It’s hard to think of another marine business quite like Aston Harald, the company Svensson put in place to promote ‘M32 World’. It is not just a boatbuilding business, not just an event management operation, nor is it just a marketing company. It is all three, and Svensson believes this holistic approach will be key to M32 World’s success. He takes the view that it’s not enough simply to sell a 32ft, ultra-light catamaran to a customer. The buyer wants to learn how to handle the boat safely and to get world-class race training and coaching. He wants a great circuit on which to compete against other M32s. The product itself is a means to an end: a great sailing experience from start to finish.

Of course, the boat itself has to be impressive, and the M32 does offer outstanding performance, with an impressive power-to-weight ratio thanks to its 8.35m beam including hiking racks and an all-up weight of just 510kg.

The M32 quickly accelerates to about 15kt upwind in moderate airs, with crews regularly seeing over 30kt downwind. A big contributor to both performance and ease of handling are the C-shaped foils which, according to designer Kåre Ljung, will support up to 50% of the sailing displacement, reducing wetted drag significantly.

However, the M32 is not an all-out foiler, nor does it aspire to be, as Svensson explains. ‘Foiling is not our thing, because we are looking at the broader market. We are in the business of selling bicycles, not unicycles. Going full foiling, yes, it is faster, but it limits the venues at which you can sail, and the costs of construction and maintenance are much, much higher.’

While the top end of grand prix racing is well catered for with ultra-fast foiling options, Svensson prefers to focus on a bigger and more sustainable market at the level below that. ‘There’s a huge void in the market from when kids are 21 years old until they are about 35 when they, more or less, stop sailing. It’s not easy continuing in the sport during those years, and certainly not to make a living from it.’

Svensson plans for M32 World to plug that void, to create a sustainable pathway for keen sailors to be able not only to race on a regular basis, but for the best to make a living from it. ‘I believe I bring a mix of sports and marketing and business knowledge, with the view that you can basically create demand for a product if you create its own self-contained environment.’

MAN WITH A VISION
Håkan Svensson had an epiphany the first time he set foot on an M32 cat. ‘I’ve been into sailing my whole life,’ says the Swedish entrepreneur, who over 15 years grew Berg Propulsion’s share of the global market for ships’ propellers from less than 1 per cent to more than 25 per cent, before selling the business to Caterpillar in 2013. ‘I sailed all kinds of boats, from Optimists to Lasers, 470s and windsurfers. But then, one day in early 2012, [Olympic gold medallist] Freddy Löof called me from Lake Garda during his Star campaign and said that he had just been sailing on the coolest thing that he has ever seen. It was an M32. So I went sailing with Freddy and, well, two weeks later I bought the first one.’ A year after that Svensson bought the rights to build the M32.

To produce a world-class boat you need a world-class facility managed by the best in the business. Former America’s Cup sailor and winner of the Volvo Ocean Race with Groupama in 2011/12, Martin Krite heads up production. ‘We are now looking at building two to two-and-a-half boats per week,’ says the softly spoken Swede.

‘So we need to look at how we can speed up the production. It’s important to have Göran and Kåre overseeing how we build the boat, to ensure that all the boats come out exactly the same. Each hull comes out at approximately 127kg, and so far all the hulls are within 1-2kg of each other.’

Such an ambitious delivery schedule looks more feasible when you know that heading up boatbuilding is Killian Bushe. A longtime Swedish resident, the Irishman is best known for his unmatched record of producing Volvo winners. But Bushe has now turned his hand to the very different challenge of mass-producing boats to tight one-design tolerances. ‘There’s a lot of focus on saving weight, to use the minimum amount of adhesive,’ says Bushe.

‘Laminating is all carefully controlled, there is a fixed amount of pre-preg and the weight of that amount won’t vary by more than the manufacturing tolerance of the pre-preg itself, which is 1.5%.’

M32 World offers four circuits aimed at different levels of ability and ambition, ranging from the M32 ODC (Owner Drivers’ Club) up to the World Match Racing Tour with a prize purse of US$1 million. It’s a lot to get your head around but, judging by the reaction Svensson experienced on a recent world tour promoting M32 World, people ‘get it’. ‘Sailors see this as an interesting alternative, or maybe an addition to what they’re already doing.

‘The M32 can be a feeder into the big dreams of the Volvo Ocean Race and America’s Cup, the TP52 circuit and so on. I don’t aspire to be in that league, but we are the bicycle to keep the sailors moving through. Once they want to go unicycling and they want to get up into that higher level, then we can say we’ve done our job.’