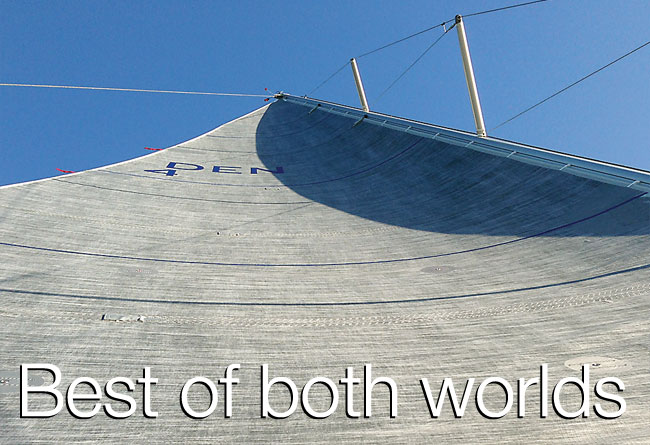 During the last two decades sailcloth construction has experienced tremendous advancements. Technologies developed to combine the best qualities of film and fibre have succeeded in producing sails that are not only light in weight but also robust enough to better retain their desired shape across the intended wind range. At Elvstrøm Sails this technology has become so effective in our own EPEX products that sails built eight years ago are still holding up with no signs of delamination. That’s a strong record.

One issue, however, that continues to plague many laminate sails is durability – the challenge of extending the life cycle of sails built in film and fibre. Physical abrasion from even regular handling on a raceboat can be extremely hard on the fabrics; this includes the repeated crunching and folding from dousing and packing the sail, the crushing the sail gets when in its bag and being trodden (or slept) on, and repeated floggings and beatings against the spar and standing rigging during manoeuvres.

All these abuses can cause significant damage to not only lightweight laminate race sails for grand prix racers, but slightly heavier club race and cruising sails as well. Simply adding thicker films to the laminates cannot completely defeat this damage, because the material then becomes just too thick to be easy to handle and may even become prone to brittle cracking. Adding taffetas certainly helped but only at the cost of adding more weight.

Besides cracking, other effects of physical abuse include surface abrasion, significant shrinkage and even fibre damage within the laminate, with all affecting the shape retention ability of the sail.

With this in mind, Elvstrøm Sails have developed a new material and process to combat these effects: EPEX GLP. Working at the Elvstrøm Sails EPEX facility in Denmark, our engineers developed a process where a thin non-woven layer of polyester fibres is bonded to each side of the EPEX laminate under heat and pressure.

‘We were looking for a way to improve on our EPEX technology to make a material that has a softer hand,’ said Jesper Bank, Elvstrøm Sails’ commercial and development director and Olympic gold medallist. ‘A softer material could be less prone to the problems in physical handling and significantly improve the working life of the sail. Because of the reduced thickness of the GLP laminate, not only is flaking easier but there is also less compression of the laminate and fibres on the inside curve of a flake. Thus the laminate will have less of a tendency to crease.’

Main picture: built using EPEX GLP, the mainsail on this Salona 37 Performance weighs 3kg more than an EPEX grand prix sail, but it is more robust and is equally suitable for cruising use. Technology in action (below) at the EPEX facility in Denmark – all EPEX membrane sails carry a 3-year warranty against delamination 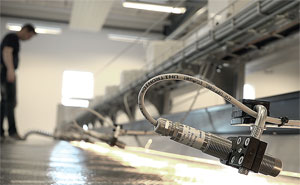 The reduced thickness of GLP also means little weight addition to the sail. Bank cites an example: ‘for a 45ft racer-cruiser, an 80m2 mainsail if built in a film-on-film EPEX grand prix material would weigh 28.5kg. Built in a Light EPEX GLP the same sail would weigh only 33kg. So for an extra 4.5kg an inshore-only mainsail becomes a multi-purpose offshore sail with much greater versatility.

‘Our preliminary tests of EPEX GLP onboard a Salona 37 in the past season have been very encouraging,’ says sales director Per Weiskvist. ‘We did two races in very heavy winds: a 142-mile distance race with winds up to 45kt and a 29-mile race with winds up to 42kt. In both races the EPEX GLP sails were performing very well and nothing broke or looked worn afterwards.

‘The sails were then used in races in medium winds between 8 and 20kt, and the performance was still 100 per cent compared with a new sail. The results for us were two wins and two second places, so results were very satisfying. The same boat is primarily now being used for cruising, and because of the easy handling feature of the cloth the sails continue to work perfectly.’

While the EPEX GLP used on the Salona test platform used two outside layers of material, there is another option to add this material as a single layer within the laminate. This variation, called EPEX GLP Single Inside, shows promise for delivering similar abrasion resistance at a slightly lighter weight.

‘We’re very excited to introduce this improvement on our original EPEX technology for the racing sailor interested in extending the competitive life of sails he uses for racing but that he may also use occasionally for cruising,’ says Bank. ‘This represents a significant portion of our customers and we think it will be of tremendous value to them and others who use their boats in this way.’

Elvstrøm Sails will be offering a new concept in regatta support for its customers during the upcoming ORC World Championship to be held in Copenhagen in July 2016. For two days prior to the start of racing Bank and other coaches will be available to assist their customers in organised training sessions both on and off the water. The support will also extend into the event itself, with debriefs and repair services on site at the venue in Skovshoved harbour.

‘We feel this is another unique value we can bring our customers at an important event,’ says Bank. ‘Already the interest is strong’.
Jesper Bank and Per Weiskvist