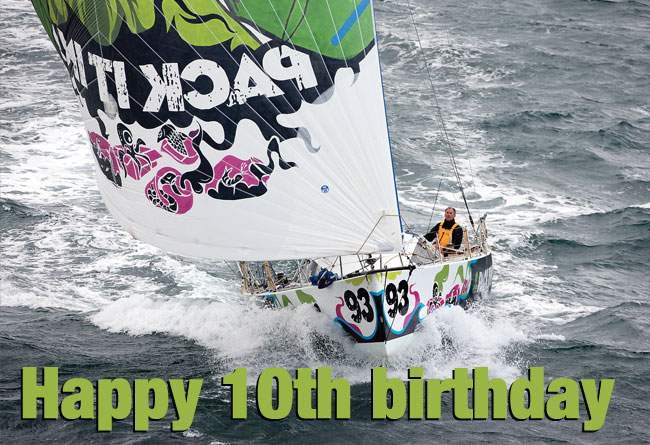 Merf Owen celebrates the first ten years of the Class40

It’s a little over 10 years since the first Class40s hit the water in France, among the first launched the Pogo 1 of Seahorse contributor Patrice Carpentier who was instrumental in the creation of the new class. For many years there had been an underlying feeling on both sides of the Channel that there was a need for a boat between the Minis and Imoca 60s. An offshore boat, less expensive than a custom 40 or 50, within the budget of the majority who wanted to venture offshore to take part in the ‘big races’ in something larger than a 30-footer. Finally, a small group of sailors organised themselves and, at some risk, moulds were built at Pogo Structures in France. Since then the class has exploded on the sailing scene attracting new people, more than anyone ever imagined, to offshore and shorthanded sailing.

Despite the economic downturn there are almost 150 yachts registered today with the class association, of which 32 have been built in the past three years. The most recent, #146, is a Pogo S3, a fourthgeneration design from the yard that started this story. Meanwhile, the percentage of ‘overseas’, that is non-French, owners of Class40s first passed the 50 per cent mark in 2009.

In fact, and unbeknown to most, the association has more international owners than French these days, it held its first ISAF World Championship back in 2009 and today a Brit, an American and a South African sit on the ruling board. There are class measurers on both sides of the Channel and the Atlantic. In North America 20 Class40s take part in their own events, racing in the Caribbean and in classics such as the Newport-Bermuda Race.