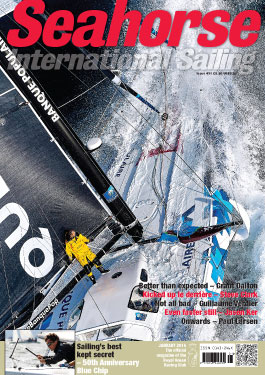 Shock and awe – Part 1
(Some of) the C-Class has stepped up by several notches thanks to the arrival of Groupama. STEVE CLARK

The day after tomorrow
Why deck-sweeper wishbone rigs look like the way to go… plus son of Sailrocket. PAUL LARSEN

A sport of idiosyncracies – Part 1
Was there ever a more illustrious guest list? DOBBS DAVIS is introduced to the Pewaukee Blue Chip and goes sailing amid the corn fields

Hangin’ in (and going fast)
Not much cash, not much time but GRANT DALTON cannot be unhappy with his team’s performance in 2015 – as he tells BOB FISHER

A brief history
The co-founder of the Caribbean 600, JOHN BURNIE’s roots in the Caribbean regatta and race-charter scene go back a lot further than that

Update
Cost and self-reliance… now the debate gets going, TERRY HUTCHINSON kicks back… as his back kicks him and JACK GRIFFIN looks at the first AC test boats to go sailing and reflects on an unusually ‘average’ year for the Cup defenders

IRC Column
It’s all about the sort of ‘fast’ that we want to be encouraging. JAMES DADD

Design – Lighter and lighter
JASON KER led the way towards a new era of lighter mid-sized IRC racers and now he’s doing it all over again. Plus IRC-ORCi… not so different

Seahorse build table – Film star
PROtect have been at it again with a ‘super-film’ for the new AC50s. GIULIANO LUZZATTO

Sailor of the Month
Visionaries and innovators… no question