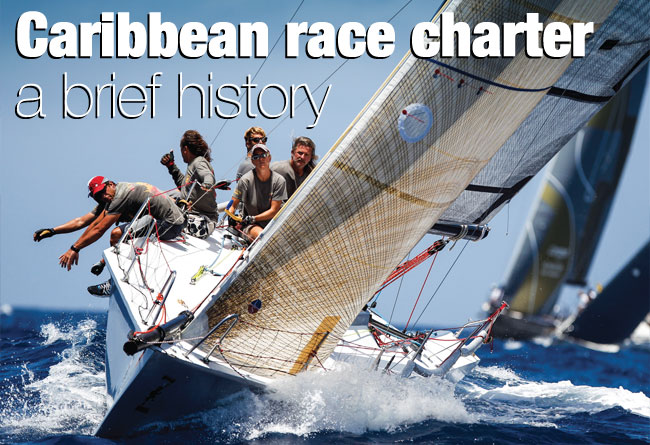 In the years following World War II sailing in the Caribbean was limited to a handful of adventurers. Their numbers were augmented by a select group of owners with larger sophisticated yachts cruising slightly ‘off-piste’

Following the arrival of the Nicholson family in Antigua in 1949 the yacht charter industry started to take shape. Within 10 years the Leeward and Windward Islands gained a sturdy reputation as an ideal yacht charter destination where consistent trade winds offered ideal conditions on a variety of (mostly classic) yachts based in the island chain. Despite increasing availability the activity remained the preserve of a privileged few.

In the 1950s and 1960s yacht racing in the USA and Europe had become commonplace and it was evolving into an increasingly technical and professional sport – regattas were gaining support from a wide cross-section of the population. I have no doubt there was some form of yacht racing in the Caribbean at this time – particularly in the Windward Islands where the traditional boats were built and the Southern Islands which were the destination of choice for larger yachts of the period. A defining moment in Caribbean regatta history has to be the inaugural edition of the annual Antigua Sailing Week which took place in June 1968.

Antigua Week was started by a group of enthusiastic sailors and hoteliers based in Antigua whose aim was to extend the charter/tourist season. Yachts participating would cruise or race to different locations each with a hotel – and so the Antigua and Barbuda Hotels Association became deeply involved in this new event. The social elements of the regatta were as important as the racing, a philosophy that continues in most Caribbean regattas today. Many of the yachts participating were rather modest – as can be seen by the history of winners of the prestigious overall prize, the Lord Nelson’s Trophy.

In 1970 the trophy was won by a Cal 30 and in 1972 Matchless, a Berthon 40, took the overall prize. David May, the owner of Berthon Boatyard, was an early and enthusiastic supporter of the regatta as he was also the owner of the Slipway Yard in English Harbour. I participated on an S&S Swan in 1974 when the trophy was won by another Swan, owned by Tony Lawson – current owner of the rather different MOD 70 trimaran Concise! Chris Dunning won it in 1978 on a 40ft Marionette and in 1980 and 1981 the prize was snapped up by a J/24!

By the early 1980s Antigua Sailing Week had grown hugely in reputation and the number of yachts taking part increased rapidly. Not surprisingly, this soon registered on the radar of many sailors (not just owners) who had ambitions to race at blue-water regattas. Kialoa 4 and the engaging Jim Kilroy turned up to participate and win the trophy for two consecutive years (1982 and 1983), heralding the arrival of bigger, more competitive yachts. By the late 1980s and early 1990s other Caribbean regattas were appearing throughout the island chain – events like the St Martin Regatta (later the Heineken), Grenada Sailing Week, Trinidad and Tobago Week, as well as regattas in the Virgin Islands appeared in short order. Participating yachtsmen now had a growing choice of venues and events to consider.

In early years only a limited number of yachts were available to charter. In addition to local yachts, potential charter clients perhaps knew someone who had taken their yacht to the Caribbean and offered to share costs and perhaps crewing arrangements. What transformed this in number terms was the arrival of the bareboat charter fleets. In St Lucia a Moorings fleet first appeared in the 1980s – suddenly affordable yachts were available which could be raced (albeit modestly) in the many events between December and May.

For a period many Caribbean regattas hosted large bareboat charter divisions. At the peak, in the late 1990s through to the early noughties, Caribbean regattas were attracting fleets of up to 300 yachts with specialist travel companies like Sunsail and ATP in Holland chartering planes to fly in crews for yachts they had arranged at various regattas.

In the mid-1990s Nautor’s Swan established a charter fleet in St Martin and in 2003 I set up a second charter fleet based in Guadeloupe. Some of these yachts were racer-cruisers in orientation but it did make available a selection of better-performing yachts. By now serious racers were also bringing their racing yachts to the Caribbean; Larry Ellison and Jim Dolan dominated a period of maxi yachts with Sayonara and Sagamore – competing with other grand prix racers including the Volvo 60s and 70s plus one-offs such as Leopard (a regular visitor).

The ARC Rally had, over a number of years, also became a hugely successful event, swelling further the number of race participants arriving for the Caribbean season. This in itself has created a niche form of racing charter. Racing yachts based in Europe now cross the Atlantic on the ARC every year and are then available for race charter throughout the Caribbean season.

Another particular if not peculiar form of racing regatta evolved which over time has morphed into the impressive event it is in the Caribbean today: Superyacht pursuit or ‘Bucket’ racing. Originating in Nantucket in the 1980s, the world’s largest yachts now gather together in increasing numbers at various Caribbean venues to race for sponsored trophies. The most notable regatta is arguably the St Barths Bucket – having started as a low-key, rather gentlemanly event, this now involves wealthy owners competing on the racecourse with intent onboard increasingly sophisticated large yachts crewed by top professional sailors. Although an exclusive domain, anyone with the necessary budget can still participate and a wide variety of yachts are available to charter.

By 2005 a harsher economic climate caused term changes and Caribbean Regattas saw falling numbers. In particular Antigua Sailing Week lost its main sponsor and, with the exception of the Heineken Regatta, fewer people were entering the bareboat charter divisions. Throughout the Caribbean, yacht charter bases were closing and several regatta events ceased or became marginalised. In addition, the average racing charter client now had greater expectancy – if they were coming to the Caribbean to compete many wanted the tools with which to win. During the past 10 years, however, there has been a gradual rebalancing and once again we are now seeing growth at most of the established regattas – plus new events have caught people’s interest. In 2009 Stan Pearson and I dreamed up the idea of a Caribbean offshore race – working in conjunction with the RORC, this initiative led to the Caribbean 600, the only classic, long-distance race based in the Caribbean. Luc Poupon and Lionel Pean established the Voiles de St Barth the following year and both events seem to have attracted interest from serious grand prix racing yachts. Simultaneously, Stan and Paul Deeth have rejuvenated a Superyacht Challenge in Antigua with a select, high-calibre entry and the British Virgin Islands have their own fresh, well-sponsored events for Maxis, Swans and Superyachts.

Caribbean racing has been run successfully for many years under the Caribbean Sailing Association (CSA) rating system, with more recent events also adding in IRC and ORC classes. The CSA have also been fortunate to have had longterm Caribbean resident and top international match racer Peter Homberg as chairman; between Peter and the many bodies organising Caribbean regattas there has always been excellent co-operation and communication, thus avoiding the scheduling clashes of the past.

For aspiring racing charter clients a highly structured Caribbean regatta season now exists where yachts can follow a defined programme. Boats are rated well under tested measurement rules that have been steadily improved and refined over many years. There are many excellent charter companies in the region with packages to suit most racers, but as one might expect, the further up the performance scale you seek to go the more creative you may have to be. Race charter clients have to compete hard for the best boats available; clients with large budgets find matters easier but there is still a paucity of competitive racing yachts available locally in the 40ft–50ft range. I am often asked how to charter a competitive yacht to race. The best advice is to research, budget and plan well in advance. Some notable and competitive yachts are usually available and in recent years several groups of RORC members have successfully chartered yachts for regattas, including of course the RORC Caribbean 600.

I would particularly point charterers seeking mid-sized more performance-oriented boats to the French islands (particularly Martinique/Guadeloupe), where there are numerous competitive bareboat yachts available such as Archambault 40s and 35s, as well as Class 40s and Pogos plus a selection of high-performance multihulls...

John Burnie
John Burnie is new business manager at Berthon Boatyard in Lymington. Living in the Caribbean for 10 years, he co-founded the RORC Caribbean 600 offshore race with Stan Pearson in Antigua in 2009. The 8th edition of the race starts on 22 February 2016

Click here for more information on The Caribbean Sailing Association » 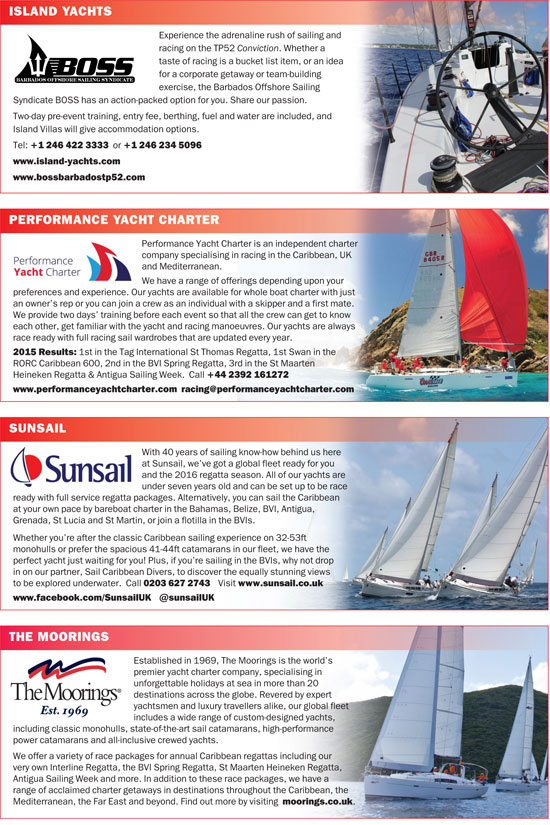