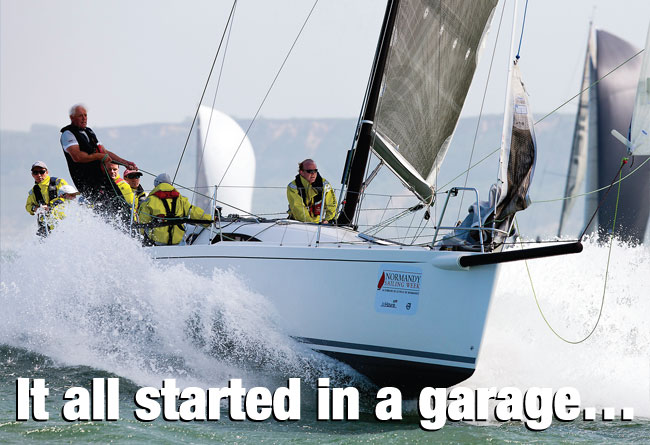 Dipping a (first) toe into the grand prix world
Rod’s underlying philosophy had always been to create boats that families could race, and not pay too much attention to rating rule influence on design. But this took a slight detour in 1984 when the J/41 was introduced as a flat-out serious IORinspired raceboat, and immediately found success by finishing 1-2-3 in the One Ton North American Championship, going on to finish first overall in that winter’s 1985 SORC, with Charlie Scott in command. A smaller version, the J/34, was then offered in 1985 and was soon being hailed as the ‘bestselling IOR design in America’.

Commenting on the rating rules of that era, Rod said, ‘The IOR and MORC rules back then were honestly not very favourable to our designs, since they promoted masthead rigs [with big, hardto- handle genoas and spinnakers], long overhangs and low stability. We figured the IOR gave credit to boats that were heavy for their length, so when we decided to do the J/41 we used these features in that design and of course in 1984-85 the boat was very successful. However, later that year the rule changed – adding crew weight limits and better stability formulations to close off these loopholes.’

Even though they sold 25 J/34s in 1985, Rod admitted ‘it was never very good to peg our business model to rating rules,’ so he returned to focus on designs that he said ‘had the right balance, the right feel, the things that you know are appreciated.’

Based on a Sail Magazine survey of boat owners in 1985, 80 per cent of J/Boat owners said they would buy another J/Boat. Bob Johnstone, ever the marketing man, immediately asked why the other 20 per cent would buy their next boat elsewhere? The response was mostly: ‘No real cruising boats!’ So they introduced their first dedicated line of cruising boats, the J/28, J/37 and J/40, with the J/40 winning USA Boat of the Year the following year.